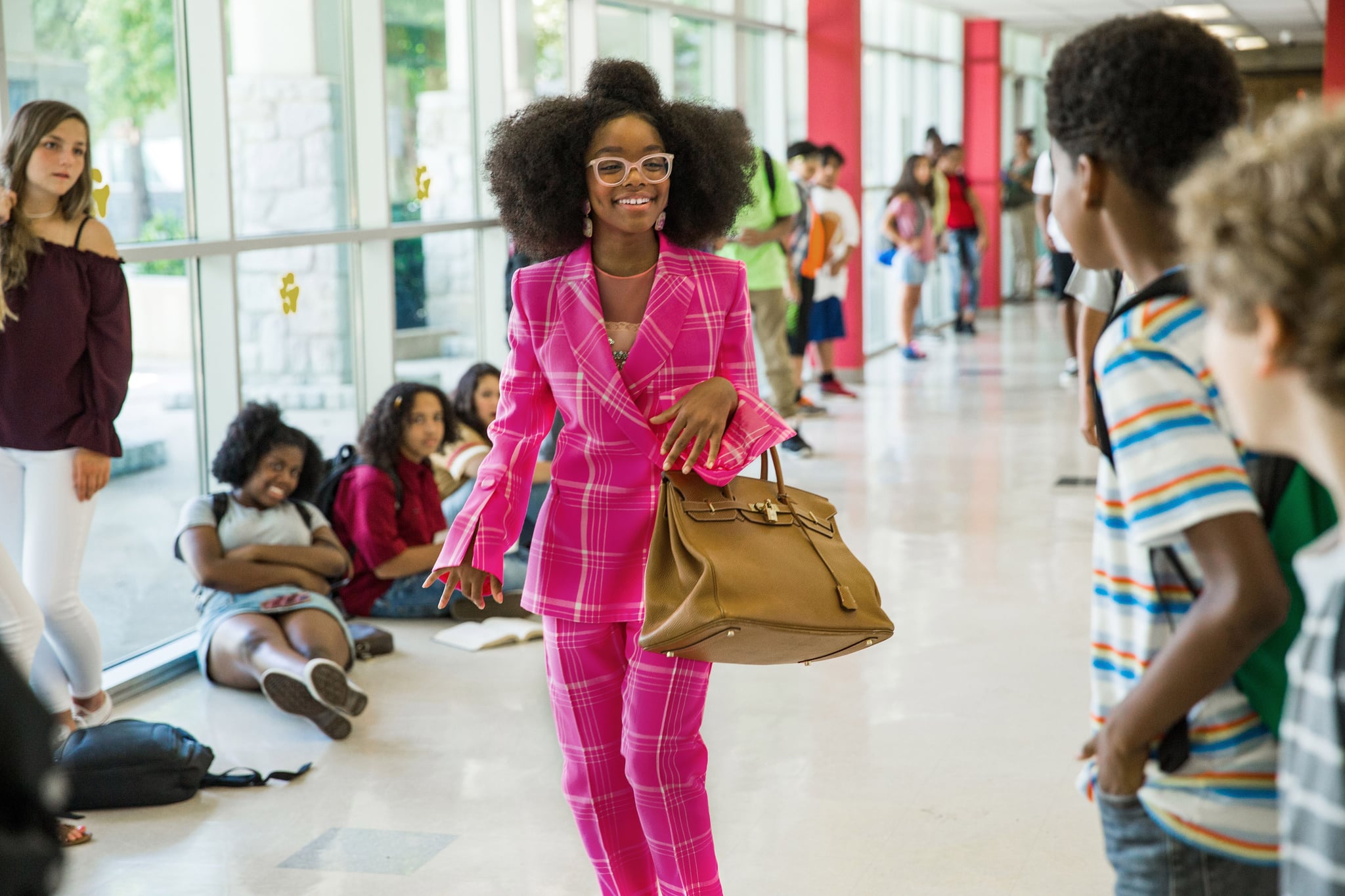 I can't tell you what I accomplished at the age of 14 (aside from worrying about being a freshman in high school), but I can tell you it certainly wasn't executive producing and starring in a major Hollywood movie based on my own idea. So it isn't an exaggeration to say that 14-year-old Marsai Martin is doing major things right now.

The Black-ish star has been steadily making grown woman moves since finding success starring in the ABC breakout series. She has her own production company, Genius Productions, which recently inked a deal with Universal Pictures that will allow them to work on a number of enterprises together. The first is an upcoming film titled StepMonster in which Martin will play a teenager adjusting to having a new stepmother. But before that, Martin hitched her star to the comedy Little, which also stars Regina Hall and Issa Rae.

Based on Martin's concept, Little is a modern reversal of the classic 1988 Tom Hanks-led comedy Big and follows horrible boss Jordan Saunders, played to perfection by both Hall and Martin. Jordan starts her day terrorizing everyone, including her long-suffering assistant, April (Rae). Jordan's reign of terror is cut short when she finally hassles the wrong person and wakes up in the body of her 13-year-old self (Martin). The film follows the classic formula with twists and turns unique to Martin's vision. Young Jordan has to deal with everyone treating her like a child again and the struggles that come along with adolescence — including relentless bullies. Even though she's been on the other side of the bullying for the last several years, it's still hurtful when it's at her expense, and the experience takes her on a journey of discovery and self-acceptance.

When I hopped on the phone with Martin, we chatted about her and Rae dancing to Mary J. Blige in the movie's bar scene, the cycle of bullying, and what her favorite part of playing such a "Boss B" is.

Related:
Regina Hall on Being a "Boss B" in Little: "It's Important That She Believed in Herself"

POPSUGAR: So how does it feel seeing your idea come to life in such a big way? Excuse the pun.

Marsai Martin: To be honest, it's crazy being part of something that is so big, just being the regular girl that I am. Being part of this amazing industry is so crazy, and I would love to create more things in it.

PS: Your work both on and off screen is so inspirational for a lot of women out there. I mean, you're an actress and producer, and have taken control of your career at such a young age. What would your next dream project be?

MM: Oh, I don't even know. There's so many in the pipeline that I want to get into, but I would definitely love to work with Rihanna. I love her so much, and I know she's getting into the acting situation now. So, I would like to work with her on something.

PS: I would definitely watch anything you do with Rihanna. Just so you know.

PS: If you had to pick one theme or message for the audience to take away from Little, what would it be?

"If you just believe in yourself and embrace who you are, you will be accepted for who you are."

MM: Well, there are a lot of messages in the film that I want people to take in, but one of them is just about second chances. I mean, Jordan's second chance is an extreme case, but at the end of it, it was just finding her true self and going back to who she really is because she thought she had to change to be accepted. But that's not really the case — if you just believe in yourself and embrace who you are, you will be accepted for who you are.

PS: Amazing advice! One thing I really appreciated about the film was that it showed the cycle of bullying and how it can affect anyone, regardless of age. Why was that an important topic for you to explore?

MM: It was important for me in a lot of ways. I was bullied at one time, but not to that big of an extent [like Jordan]. I wanted this film to be relatable, and I know bullying is something that kids can relate to. I wanted to make the point to just be yourself.

PS: What was your favorite part of playing an adult in a child's body?

Related:
Little: Marsai Martin on Why She Casted "Boss B" Women Regina Hall and Issa Rae

PS: I know you were very involved in the process of making the film. Did you have a hand in the costume selection, creating any of the characters' personalities, or anything like that?

MM: Kinda, sort of. It was more like building the character and then having people help out with bringing them to life. With Jordan, I knew we wanted her to be the strong, powerful woman that she is, and I thought it should be seen through her hair, whether she's big or small. Same thing with her clothes; it just had to match her personality. So working with great people to actually make that happen was amazing. 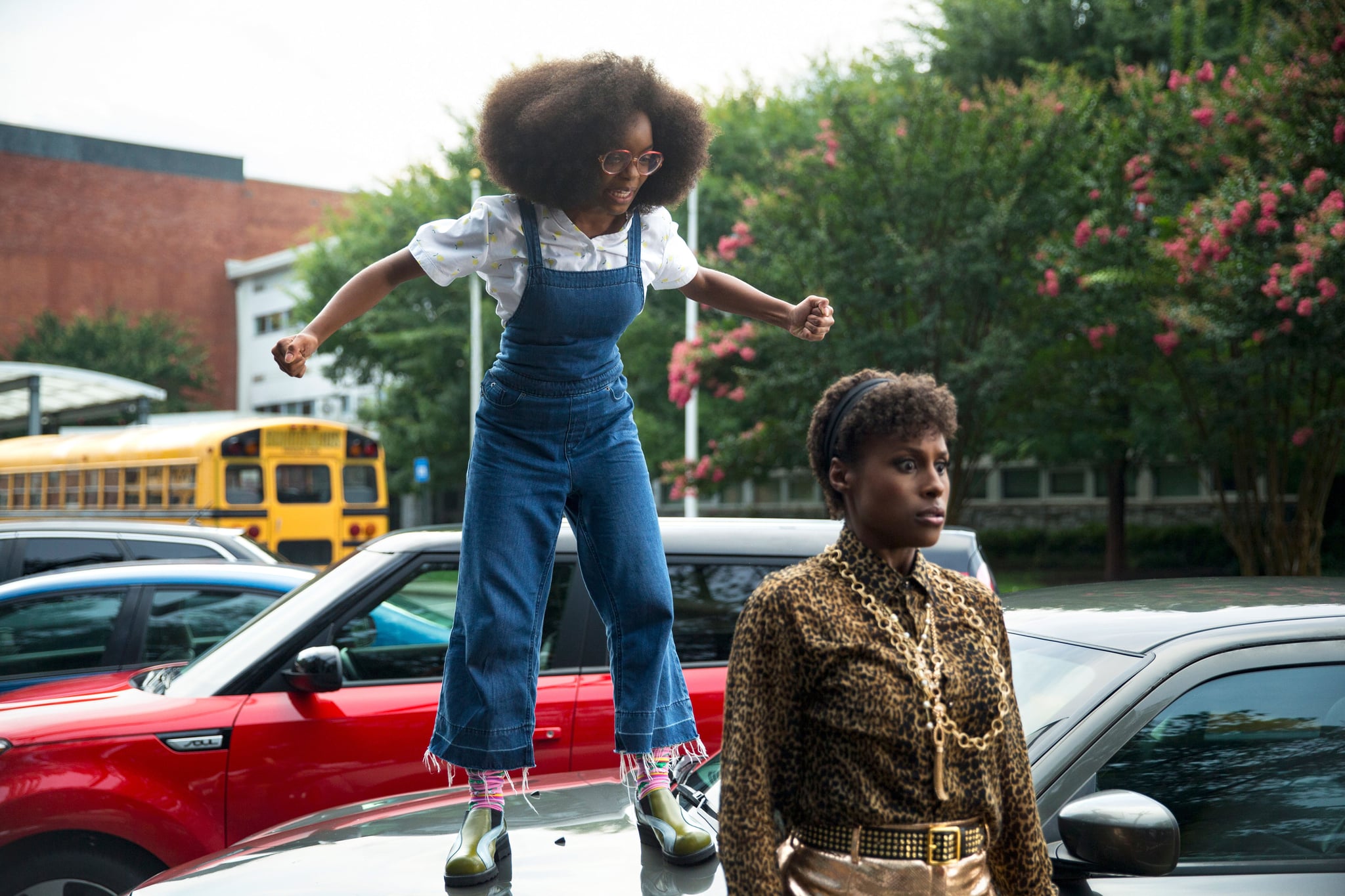 PS: Your onscreen dynamic with Issa Rae is so great; you two were such a great duo on screen! What was your favorite scene to film with her?

MM: Oh, there's so many scenes that I love, but one of them was definitely the bar scene. That was fun, being on top of the bar dancing — even though it was literally 1 o'clock in the morning, and we shot till 6. Well, I didn't because I'm a minor, but it was a good time, even though we were sleepy. When you see the film, you could never tell! It was cool. [laughs]

PS: Not at all, you guys looked like you were having the time of your lives! What's a piece of advice you've been given that you want to pass on to women and girls trying to make their own dreams happen, like you have?

MM: Just to be yourself and to stay confident in who you are, in being your most authentic self.

"I wanted to make the point to just be yourself."

PS: I think that's really powerful, especially since you're so young — you've been yourself this entire time, and you made a movie happen! What is a really important scene to you that you're excited for people to see?

MM: There were so many, but probably the Winchella prep rally. It was a fun scene to shoot, so I think people will really feel the vibe. We're dancing, we're having a good time, and we put so many rehearsals in for it; it was lots of fun.

PS: Did you have a hand in choreographing that?

MM: Oh no, I did not choreograph any of that! [laughs] It was Sean Bankhead, he choreographed the whole thing; he did the performance with Luke [James, who plays Trevor, Jordan's beau in the film] and he's so cool. It was lots of fun working with him, but he did everything.

PS: Well, you guys looked amazing. It was really fun to watch.