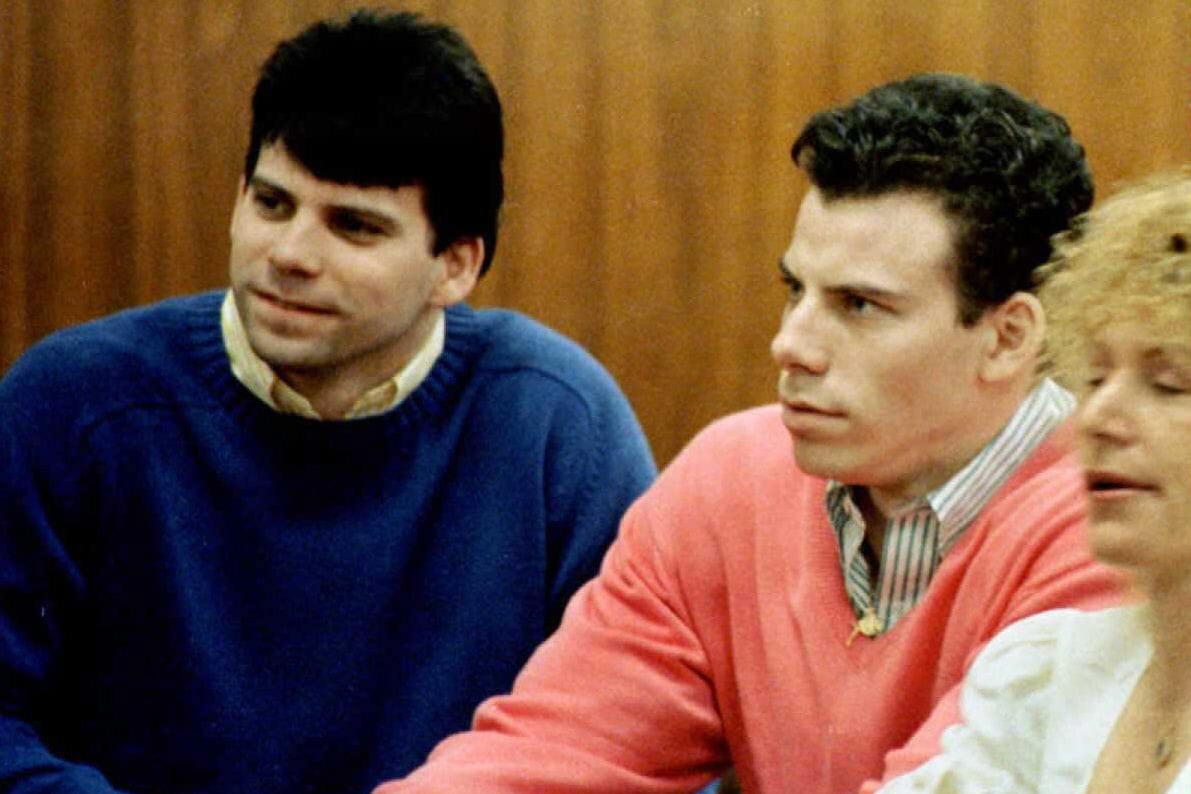 This year marks 28 years since Erik and Lyle Menendez brutally murdered their mother and father in the family's Southern California home, putting the wheels in motion for one of the most infamous trials of the 20th century. ABC drudged up the disturbing case for a primetime special, Truth and Lies: The Menéndez Brothers — American Sons, American Murderers, back in January; Lifetime revived the story in June with the movie Menendez: Blood Brothers; and this month came Law & Order True Crime — The Menendez Murders. On the off chance that you're not familiar with the case, here's a brief overview of the very complicated crime.

Who Are the Menendez Brothers?

Joseph Lyle and Erik Galen, born in 1968 and 1970, respectively, were children of privilege. Their father, José, worked his way up the corporate ladder to become the CEO of the (now defunct) film studio LIVE Entertainment. Their mother, Mary Louise "Kitty" Andersen, was a stay-at-home mother. The family lived in Chicago and New Jersey before relocating to the affluent suburb of Calabasas, CA, in 1987. Lyle got into Princeton but was suspended after being accused of plagiarism. Both boys — who were unusually close — were bred to be tennis pros, and their father pushed them to be the best.

On the night of Aug. 20, 1989, José and Kitty were relaxing in their den, watching the James Bond flick The Spy Who Loved Me. Lyle and Erik ambushed them from behind, shooting José in the back of the head and crippling Kitty with a gunshot wound to the leg when she tried to run. They shot her so many times that her face was unrecognizable by the time police arrived on the scene. Because of their father's alleged ties to organized crime, the brothers tried to make it look like a mob hit by shooting out their parents' kneecaps. After the deed was done, they went to the movies and met up with some friends to provide an alibi. Later that night, Lyle called the police, screaming that someone had killed his parents.

While investigators initially had no reason to suspect Erik and Lyle, the brothers started exhibiting strange behavior for people whose parents had been recently murdered. Lyle went on a spending spree, buying a Porsche and a buffalo wings restaurant in New Jersey. Erik went to Israel to compete in tennis tournaments. They went on extravagant trips together, racking up over half a million dollars in purchases in the months after their parents' deaths. Unable to take the guilt, Erik confessed to the murder in a session with his psychiatrist. The psychiatrist's girlfriend overheard the conversation and went to the police when the relationship fell apart. The brothers were arrested in March 1990.

In the courtroom, Lyle and Erik showed little remorse for what they'd done. A damning piece from the LA Times detailed, "The brothers, appearing at a series of evidentiary hearings in recent weeks, have appeared at ease, smiling at their girlfriends and relatives who show up for support." However, as more and more evidence began to pile up, the unbelievable truth came out. They had gotten the idea to kill their parents from the movie The Billionaire Boys Club. Erik had even written a screenplay with his friend; the movie was about a rich kid who murders his parents to inherit their fortune. The brothers searched for a pitiable motive, alleging that their father molested them. The juries (one for Lyle and one for Erik) failed to agree on a verdict, resulting in a mistrial.

Related:
Law & Order True Crime: The Menendez Murders Wants to Change Your Mind About Those Brothers

While the first trial was highly publicized thanks to the new channel CourtTV (aka TruTV), the second trial gained far less attention. Another reason the Menendez brothers fell out of the public eye? America had moved onto another high-profile murder case: that of O.J. Simpson, who had been accused of killing Nicole Brown Simpson and Ronald Goldman. While the public had lost much of their initial interest in the brothers, Erik and Lyle were convicted and sentenced to life in prison in 1996. Their appeals have been denied, and they have no chance of parole.

Lyle Menendez is currently serving his time at the Mule Creek State Prison in California, while Erik is residing 200 miles away in a cell in the Pleasant Valley State Prison.