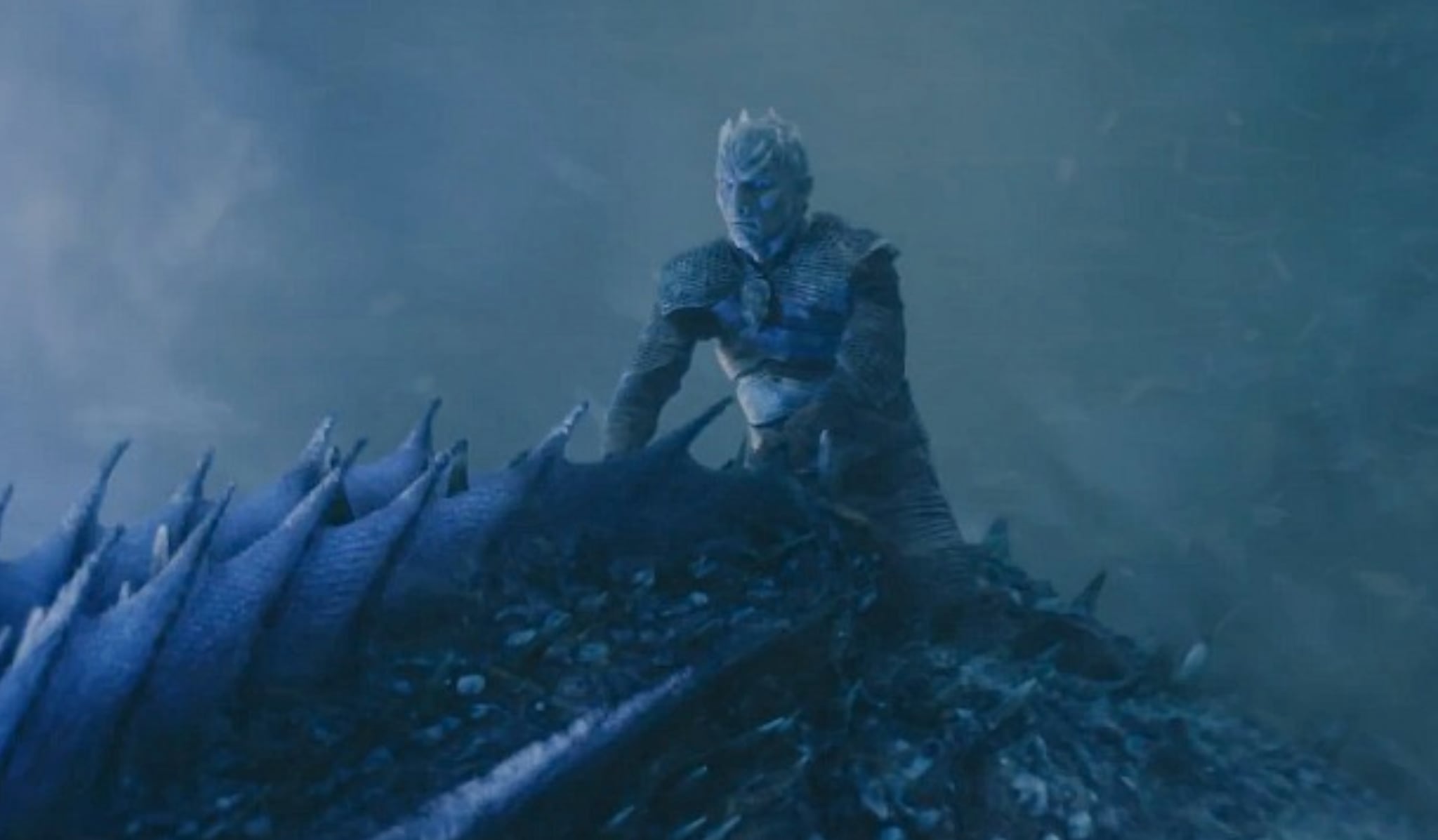 Warning: plenty of spoilers for Game of Thrones below!

Game of Thrones is only one episode into season eight, and a lot is already going on, which is to be expected since 1.) we had to wait an eternity for it to arrive, and 2.) it's the final season. As in the final season ever. As in we only have FIVE MORE HOURS of Game of Thrones left, people! Given that time is running out, there are a ton of important questions that fans are hoping showrunners David Benioff and D.B. Weiss will answer. For example: What is the true identity of the Night King? And could he be a Targaryen?

Season six shows the First Man whom the Children of the Forest weaponize to become the first White Walker, but is he the same icy menace who is currently hellbent on conquering Westeros and killing our faves? Probably. However, that hasn't stopped fans from theorizing about who the Night King was before he was transformed. And now that he has Viserion, a theory about him being a Targaryen — specifically Rhaegar — is all the more intriguing. Let's break this down clue by clue, shall we?

Related:
Why the Three Heads of the Dragon Prophecy in Game of Thrones Is More Important Than Ever

Why Is the Night King Able to Ride a Dragon?

Way back when, the Targaryen family mastered the rare art of dragon-riding through a mix of sorcery and good old-fashioned practice. In Daenerys's case, she seems to be able to ride them without the use of magic; she's shown to have bonded with the creatures on an intense level (she's their mother, after all). But other than her (and now Jon, who has Targaryen blood in his veins), no one else has been able to tame a dragon. Remember what happened to that arrogant lord in Meereen when he tried to approach Rhaegal and Viserion in the dungeon? Instant chicken nugget.

In season seven, Viserion is tragically shot out of the sky by the Night King during a battle beyond the Wall. After sinking to his death in an icy lake, the White Walkers haul out the dragon's body, and the Night King uses his magic to revive him; next thing we know, he's riding astride Viserion and destroying the Wall. Could he actually be the third rider in the Three Heads of the Dragon prophecy?

Is the Night King Part of the Three Heads of the Dragon Prophecy?

In a nutshell, the prophecy states that only once three riders for each of Dany's three dragons are established will the Targaryen queen be able to claim the Iron Throne. She hears the prophecy in a vision of her late older brother, Rhaegar, while in the House of the Undying. For a while it was thought that Dany, Jon, and Tyrion would be the three riders, but now Dany, Jon, and the Night King have all taken rides on Drogon, Rhaegal, and zombie Viserion, respectively.

Since the Targaryens were the only family known to have been able to ride a dragon, it's making people wonder if the Night King was a member of the Targaryens before his frosty transformation into the villain we know now. Could Rhaegar — Jon's father, Dany's brother — somehow have been turned into the Night King after he was murdered by Robert Baratheon? It's a very, very far reach, but since some of the Children of the Forest are still kicking, they might have been able to reach his body and plunge dragonglass into his heart before he died completely, sparking his transition. (We personally like the theory that Bran is somehow the Night King, but hey — bring on the cool theories!) 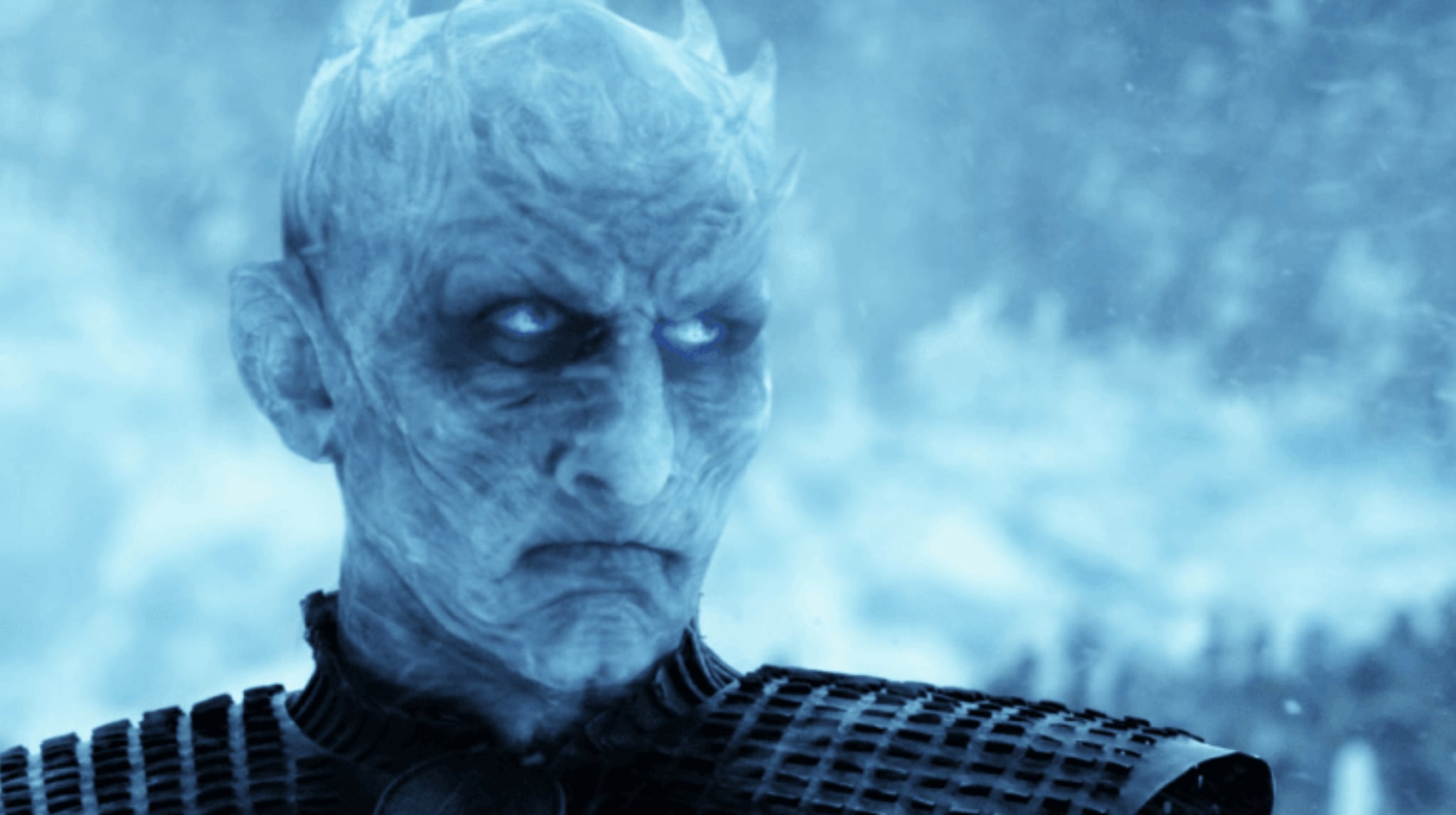 Is the Fiery Symbol in the Premiere a Take on the Targaryen Sigil?

A gruesome moment at the end of the season eight premiere could also potentially be a clue to the Night King's Targaryen lineage. In one of the last scenes of the episode, Tormund Giantsbane, Beric Dondarrion, Eddison Tollett, and other survivors of the Wall's destruction are shown at Last Hearth, which is the home of House Umber. They find the corpse of little Lord Umber strung up and surrounded by severed human limbs arranged in a familiar spiral pattern and are then forced to set it all aflame when the boy comes back from the dead as a wight.

The chilling arrangement of limbs makes up a symbol that's a familiar calling card of Team Night King. It's first seen in season one, when White Walkers kill a group of wildlings and arrange their bodies in a similar pattern. Jon comes across some of the Night's Watch horses cut up and arranged in a spiral in season three and also sees the pattern carved into the walls of the caves in Dragonstone, which he reveals to Daenerys before they begin mining it for dragonglass.

There are a few ways to interpret the symbol, but we can't get over how much it resembles the Targaryen sigil.

The White Walker spirals & the Targaryen symbol look so much alike. Rhaegar is indeed the night king. #GameofThrones pic.twitter.com/dpfRhDNGVs

The spiral is eerily similar to the Targaryen clan's three-headed dragon sigil, which is done in a spiral-esque shape. Other fans have noted that the blazing symbol in the premiere has seven "arms," so to speak, which could represent the Night King taking over the Seven Kingdoms instead.

So, is the Night King a Targaryen? Is he Bran? Is he simply some anonymous man who got the icy end of the stick a billion years ago? Fingers crossed the powers that be decide to tell us by the end of season eight . . . or else.