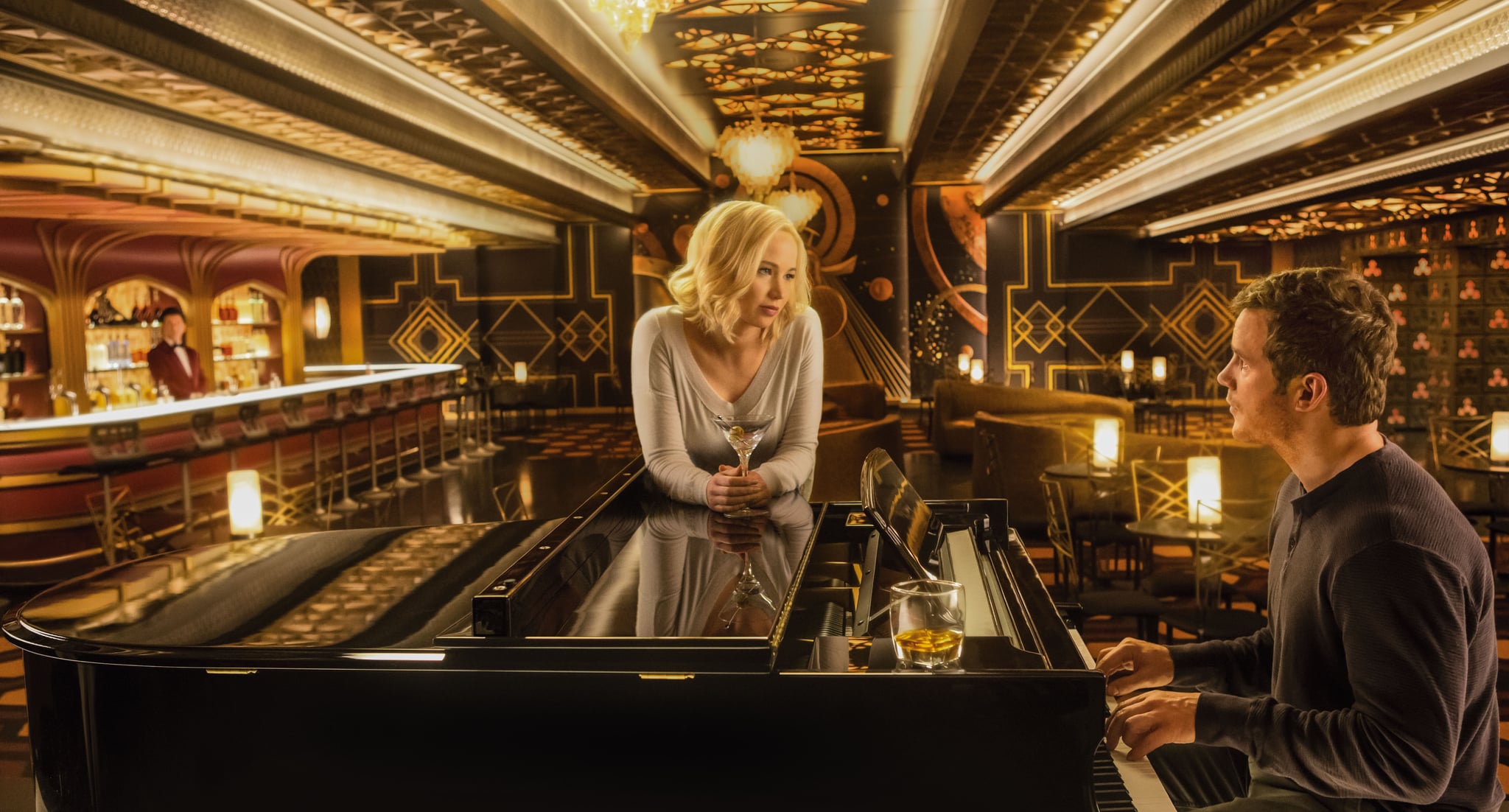 Upon first look, Passengers seems like a sweet movie. Based on what we see in the trailers, Jim (Chris Pratt) and Aurora (Jennifer Lawrence) both accidentally wake up due to an unfortunate spaceship malfunction and make the best of their new lives in outer space together. There's space frolicking! There's a space date! There's space sex! Everything seems pretty hunky-dory. Sure, the trailers also hint at the big crisis in the film as well: that the spaceship is malfunctioning and it's up to these two to save themselves and everyone else, lest the whole thing be blown to smithereens. While the bare-bones plot is evident, the trailers don't give you a full scope of the story. Here's how everything goes down.

Related:
Everything You Want to Know About Jennifer Lawrence and Chris Pratt's Romance

Jim is actually the only passenger to wake up due to the malfunction. He quickly realizes he's all by himself, and the huge spaceship basically turns into a one-man playground. He plays basketball and video games all day, he treats himself to the finest meals that are in his customer package, he goes out into space, and he tries to get back to sleep. After a year of loneliness, solitude, and eventual hopelessness, he happens upon Aurora, who still sleeps soundly in her pod. For some reason, Jim latches on to Aurora out of the thousands and thousands of other passengers, and after a month or so of painful deliberation, he wakes her up on purpose. 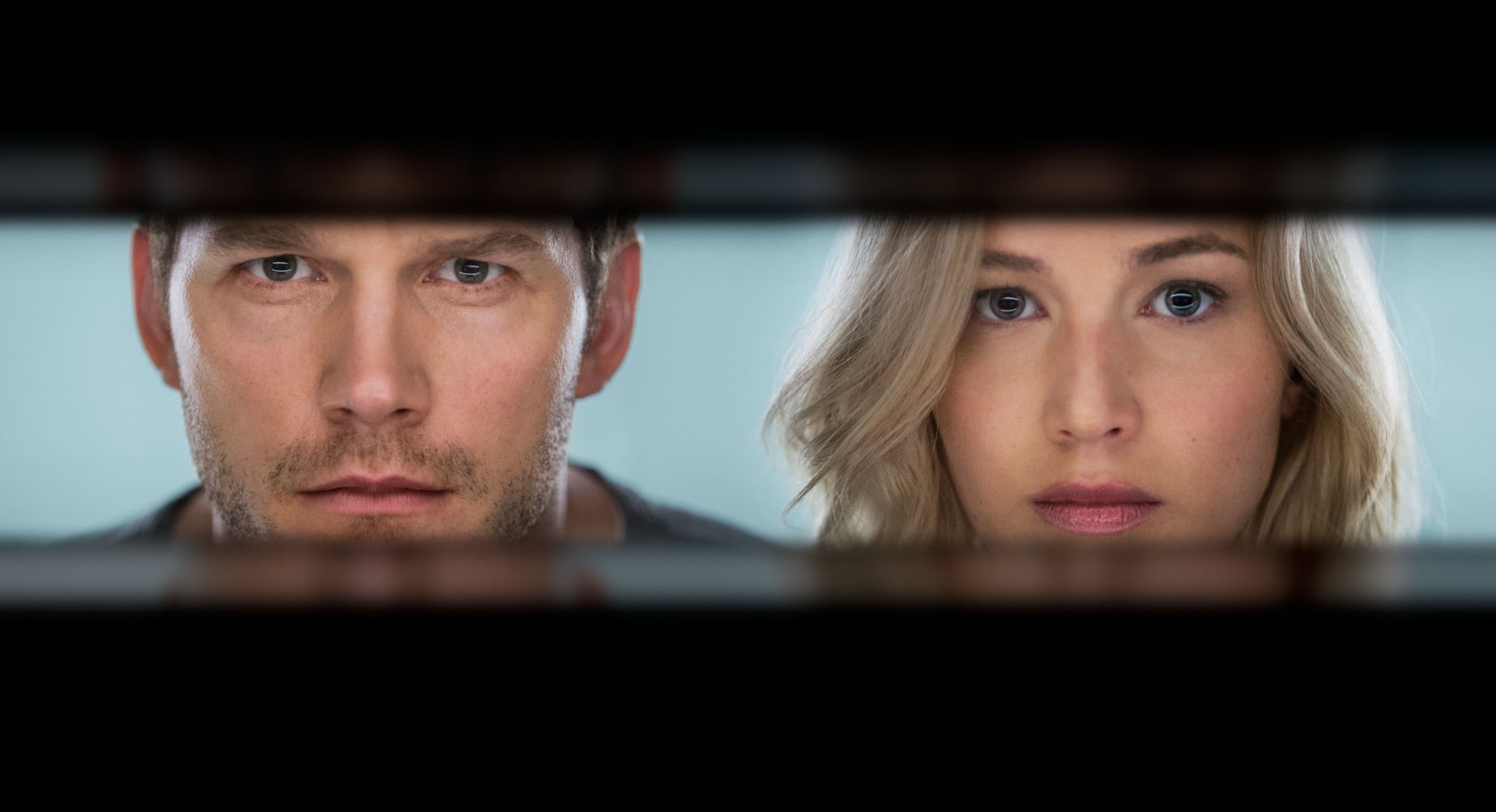 While there is a honeymoon period, probably a year, when the couple is happy, Aurora soon discovers what Jim's done. She's devastated, heartbroken, and unwilling to forgive him. They seem doomed to live out their lives separately on this hopeless ship, until the captain (Laurence Fishburne) suddenly wakes up. His pod has riddled him with cancer and 200 other crazy body abnormalities, so he only lives long enough to tell Jim and Aurora to fix the ship, and to give them the proper clearance to access everything. They find out a huge rock has broken through the shield and has messed up a crucial part of the ship. They need to fix the nuclear reactor to get everything back on track.

Jim and Aurora save the day. Jim has to go outside to open a door that will vent out all the built-up heat in the reactor (blah, blah, science), and he nearly dies in the process. Aurora manages to rescue him and save him at the very last second. The two fix the ship, and all is forgiven. Jim realizes that a advanced hospital bed in the medical center has the ability to simulate the same sleep that the pods cause. In essence, Aurora could go back to sleep and wake up with everyone else in 90 years. And she decides not to.

Sure, Aurora has the right to make this choice, but it's hard not to think about it in the context of her character. She's an aspiring writer who hopes to be the next big voice of her generation. She has a goal: to be the first person to travel to this distant planet and back, and to live to tell her tale. She hates Jim for taking this life away from her. By the end, the fact that she's fallen in love with him feels more like Stockholm's syndrome than a change of heart. Aurora gives up everything for the man who woke her up against her will and, more or less, ruined her life. Because it's so romantic, right?

Related:
1 of the Most Romantic Moments in Passengers Turned Out to Be the Most Awkward
Image Source: Everett Collection
Jennifer LawrenceChris PrattPassengersMovies