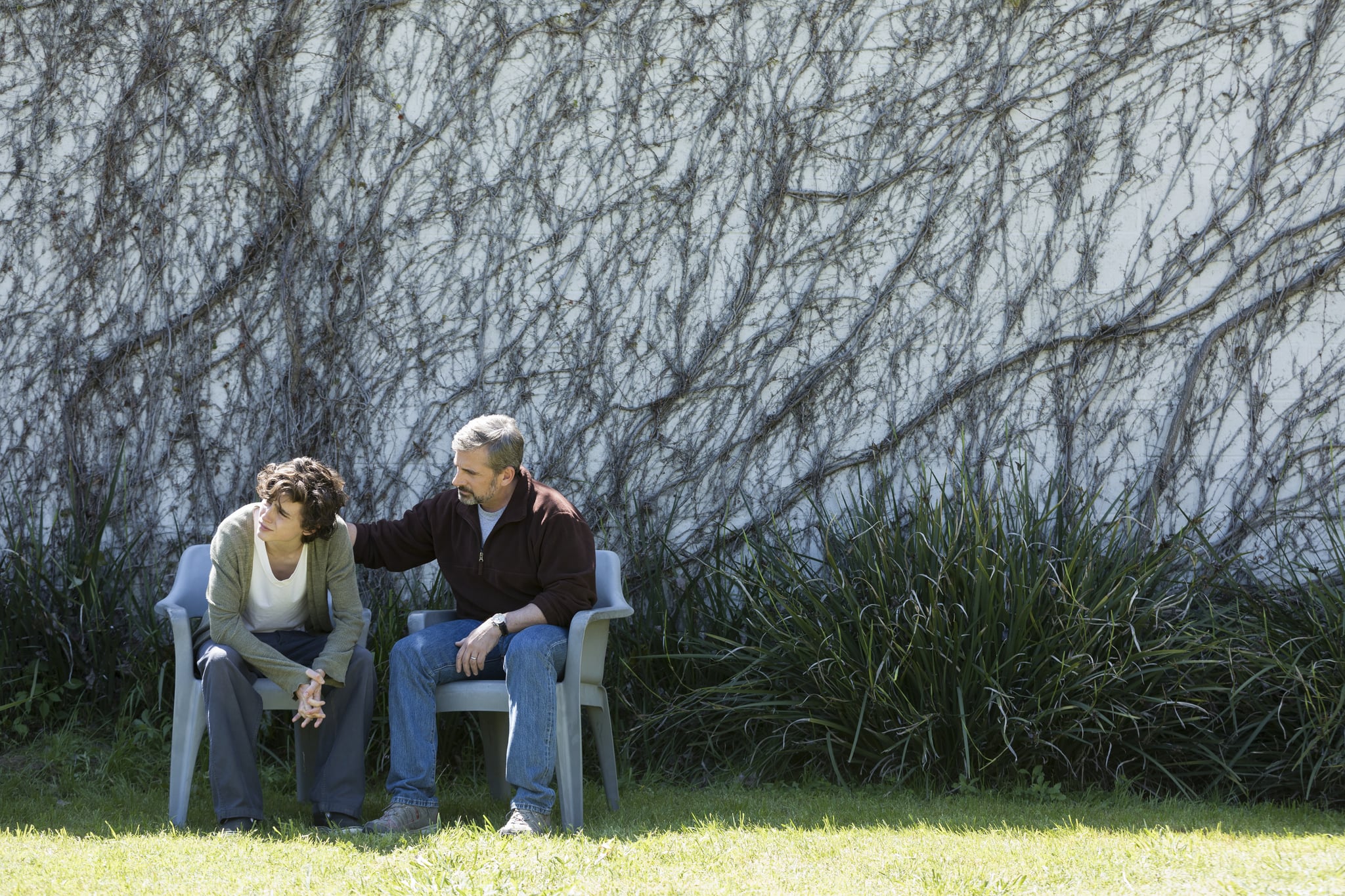 The highly anticipated adaptation of David Sheff's bestselling memoir, Beautiful Boy, is here, and it's as heartbreaking as we expected. The movie, starring Steve Carell and Timothée Chalamet, gives viewers an inside look at drug abuse and the toll it takes not only on the addict but also on the addict's loved ones. The movie is a roller coaster of harrowing and hopeful emotions, and we'd be lying if we said we didn't go through an entire pack of tissues while witnessing this powerful journey. We get it: if we spent the last two hours crying through a movie, we'd typically bolt to the bathroom to dry our mascara tears. But there's a very valid reason you should stay until the credits have stopped rolling.

Warning: spoilers for Beautiful Boy ahead.

If you've read David Sheff's Beautiful Boy and Nic Sheff's Tweak, you know that there are no shortage of literary and creative works intertwined in the stories. There are John Lennon lyrics, Kurt Cobain references, and, of course, Charles Bukowski poems. In the middle of the movie, after making it through rehab, Nic goes away to college. (In real life, Nic goes to Hampshire College in Massachusetts for a year.) During one of his classes, Nic reads a snippet from the Bukowski poem "Let It Enfold You."

"Either peace or happiness, let it enfold you // When I was a young man, I felt these things were dumb, unsophisticated. I had bad blood, a twisted mind, a precarious upbringing. // I was hard as granite, I leered at the sun. I trusted no man and especially no woman. // I was living a hell in small rooms, I broke things, smashed things, walked through glass, cursed. I challenged everything, was continually being evicted, jailed, in and out of fights, in and out of my mind. Women were something to screw and rail at, I had no male friends. // I changed jobs and cities, I hated holidays, babies, history, newspapers, museums, grandmothers, marriage, movies, spiders, garbagemen, English accents, Spain, France, Italy, walnuts and the color orange. Algebra angered me, opera sickened me, Charlie Chaplin was a fake and flowers were for pansies. // Peace and happiness to me were signs of inferiority, tenants of the weak and addled mind."

Behind the dark Bukowski words is an enchanting moment, as it's during that class that Nic meets his college girlfriend, Julia. Their relationship eventually crumbles due to his addiction, and his tendency to take advantage of those closest to him when he dabbles in Julia's mother's medicine cabinet, but the poem comes full circle at the end of the movie.

Related:
Before Beautiful Boy Hits Theaters, Prepare Yourself With the Real Story

After years of rehab, relapses, overdoses, and scary hospital visits, Nic comes out of his addiction alive and in recovery. The final scenes of the movie explain that Nic has been sober for eight years and "every day is a challenge." As the last chunk of the credits roll, Chalamet starts speaking again in voice-over, picking up the other half of the Bukowski poem. The words couldn't be more valid to the tone of the movie's final scenes.

"Something in me relaxed, smoothed out. I no longer had to prove that I was a man."

"I reformulated, I don't know when, date, time, all that, but the change occurred. Something in me relaxed, smoothed out. I no longer had to prove that I was a man. // I didn't have to prove anything. // I began to see things: coffee cups lined up behind a counter in a cafe, or a dog walking along a sidewalk, or the way the mouse on my dresser top stopped there with its body, its ears, its nose, it was fixed, a bit of life caught within itself and its eyes looked at me and they were beautiful. Then it was gone. // I began to feel good, I began to feel good in the worst situations and there were plenty of those."

The poem continues: "The knife got near my throat again, I almost turned on the gas again, but when the good moments arrived again I didn't fight them off like an alley adversary. I let them take me, I luxuriated in them, I made them welcome home. I even looked into the mirror once, having thought myself to be ugly, I now liked what I saw, almost handsome, yes, a bit ripped and ragged, scares, lumps, odd turns, but all in all, not too bad, almost handsome, better at least than some of those movie star faces like the cheeks of a baby's butt."

It's a note to the highs and lows of addiction, the good days and the bad days that Nic has faced, but the light that he sees through the struggle. It's a full-circle moment that, as a viewer and fan, ties the movie and the story together. While there may not be a postcredits scene in the film, it's this heartfelt reading of the poem that gives us closure on Nic and David's journey.