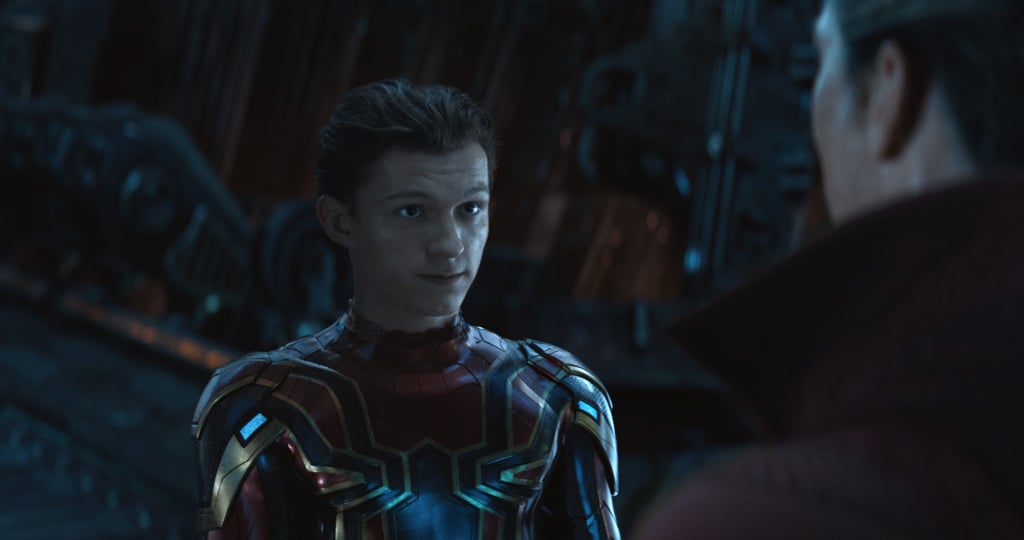 You guys know the drill — Avengers: Infinity War spoilers below!

It's a good thing Marvel has millions upon millions of dollars at its disposal, because after Avengers: Infinity War, it needs to reimburse a lot of fans for numerous boxes of tissues (and a few therapy sessions, let's be real). As you're hopefully aware by now, the epic team-up film ends with Thanos vaporizing half of the universe with a dramatic snap of his fingers. Thus, approximately half of our beloved heroes turn to dust on the spot. The reaction to those deaths on Twitter has been intense, to say the least, but one death in particular has everyone sobbing nonstop: Peter Parker/Spider-Man (Tom Holland).

Once Thanos snaps (literally), a few unlucky characters begin to turn to ash, and for the most part, it seems they can't even feel what's happening. Whether it's because of his spidey senses or something else, Peter realizes what's happening long before his comrades. He reaches out for mentor Tony Stark/Iron Man (Robert Downey Jr.) when he starts to fade, tearfully telling him stuff like, "I don't want to die, I don't want to go," before disintegrating in Tony's arms. Naturally, heartbroken tweets about the moment haven't stopped pouring in since the film hit theaters.

Insecure
6 of Natasha Rothwell's Best Roles, Because She Understands the Assignment Every Time
by Naledi Ushe 21 hours ago

Holiday Movies
Yes, You Can Watch Hallmark Christmas Movies Without Cable — Here's How!
by Amanda Prahl 22 hours ago