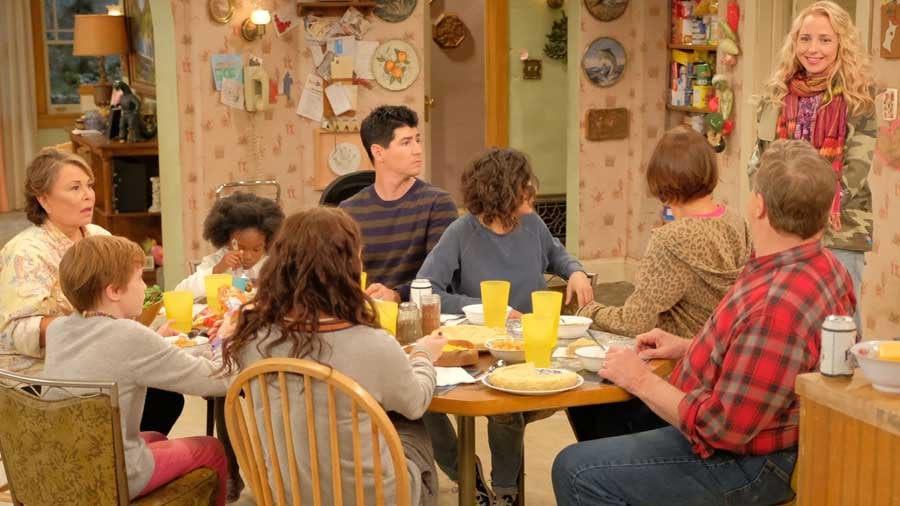 Roseanne's return to the small screen has been a smash success so far. Not only has the show tackled relevant themes and given more than a few nostalgic nods to the sitcom's original run, but season 10's ratings have also completely blown other TV shows out of the water. That being said, the nine new episodes, which pick up 21 years after the show went off the air in 1997, had only been given the green light for a single season. Before we got too attached, we had to know: will the Roseanne reboot come back for a second season on ABC?!

The answer is a resounding yes. The Hollywood Reporter announced on March 30, just a few days after the season premiere, the good news that season 11 is officially a go. Given the sky-high ratings, it should come as a surprise to no one that ABC decided to renew Roseanne Barr's half-hour family comedy. According to THR, the next batch of episodes will once again see original cast members Barr, John Goodman, Laurie Metcalf, Sara Gilbert, Alicia Goranson, and Michael Fishman reprising their roles as members of the Conner family. As far as a premiere date goes, it's still up in the air, but sources say the second time around we'll get 13 episodes instead of nine.

At the 2018 TCA Winter press tour back in January, creator and star Barr made the comment that she always wanted a 10th season to complete the Conners' story. "In the original series, I always wanted to have a 10th year so that I could do exactly what I did in these nine, which was to finish and complete the story of this family, so I always had that in my head that that was how it would go. And so I'm very happy that we got a 10th season and we got to do that," she explained.

Clearly the Conners' story still isn't complete. Barr also mentioned that she already has a few ideas as for where season 11 could go. "[Jerry Garcia, the Conners' fourth child] is on a fishing boat in Alaska, and we haven't dealt with Andy, Laurie's son, yet either," Barr said. "But we had so many stories to tell over the arc of these nine episodes, that we're hoping for another season to bring, you know, more clarity to those characters." Looks like she got her wish!

Related:
2 Actors Played Baby Jerry on Roseanne — Here's Why Neither of Them Is in the Reboot

So there you have it — now that Barr & Co. have had their way, there will be plenty more of the Conners on ABC for years to come.