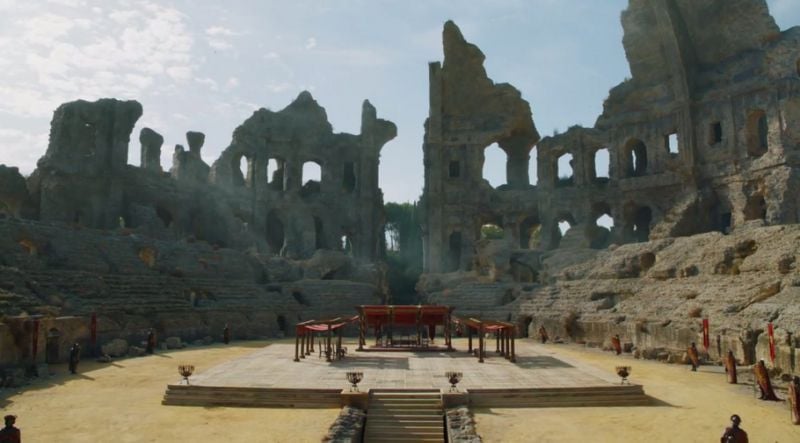 The Game of Thrones season finale provides a fitting end for our characters (OK, depending on who you ask). We're sad to see them go, but it seems like all of the survivors receive a happy ending. However, as hard as the show's creators work to tie up loose ends and broken alliances, we still have a few smoldering questions. The main question being, what's with the coliseum-like structure that acts as backdrop for Tyrion's trial in front of the Seven Kingdom's council of queens, kings, wise men, and military minds?

The answer is one that you wouldn't expect, but it echoes the demise of King's Landing by dragon fire and fits into the theme of Daenerys as the Mad Queen. The structure that we see is actually the remains of the dragonpit that House Targaryen built as a stable for their dragons hundreds of years before the events of the series. Located atop the Hill of Rhaenys in King's Landing, the original structure contained a dome and acted as a place for the dragons to nest within the confines of the city.

The structure came into existence following the destruction of the Sept of Remembrance, better known as the home of the Faith Militant and the High Septon. The order once seized the capital city, forcing out old King Aenys Targaryen. However, dragons were plentiful during that period of history and represented a source and symbol of power for the great house. So when Aenys's younger half-brother took control of the throne, he returned to King's Landing and burned down the sept using a dragon named Balerion. Then, instead of rebuilding the temple, he ordered the construction of the Dragonpit in its place.

Unfortunately, the Dragonpit would eventually fall as well. During the Dance of the Dragons, a Targaryen civil war of ascension fought 170 years before the War of the Five Kings, the people of the city converged on the Dragonpit and killed the five dragons housed inside for being too powerful. The actual Dragonpit structure fell to ruins when one of the dragons, Dreamfyre, attempted to escape through the ceiling — crushing hundreds of people in the process.

By the end of Aegon III's reign, dragons were extinct. That's why Daenerys's possession and control of the creatures brings such awe to the people of Westeros. But more importantly, it's why many saw her as a threat. Dragons carry a power that few humans can control, and their existence often leads to the destruction of those around them.

Of course, since these events predate the show, viewers may simply recognize the Dragonpit as the place where Daenerys and Cersei met for the wight demonstration organized by Jon Snow in season seven. We can also see portions of the coliseum-like structure on the horizon during the Battle for King's Landing during this final season.

So with all this in mind, it's apropos that this becomes the location where the council of the Seven Kingdoms elects a fair and just king. The move is a true sign that the old regime is dead and that something new has risen from its ashes.

All Hail Bran the Broken! Long may he reign.