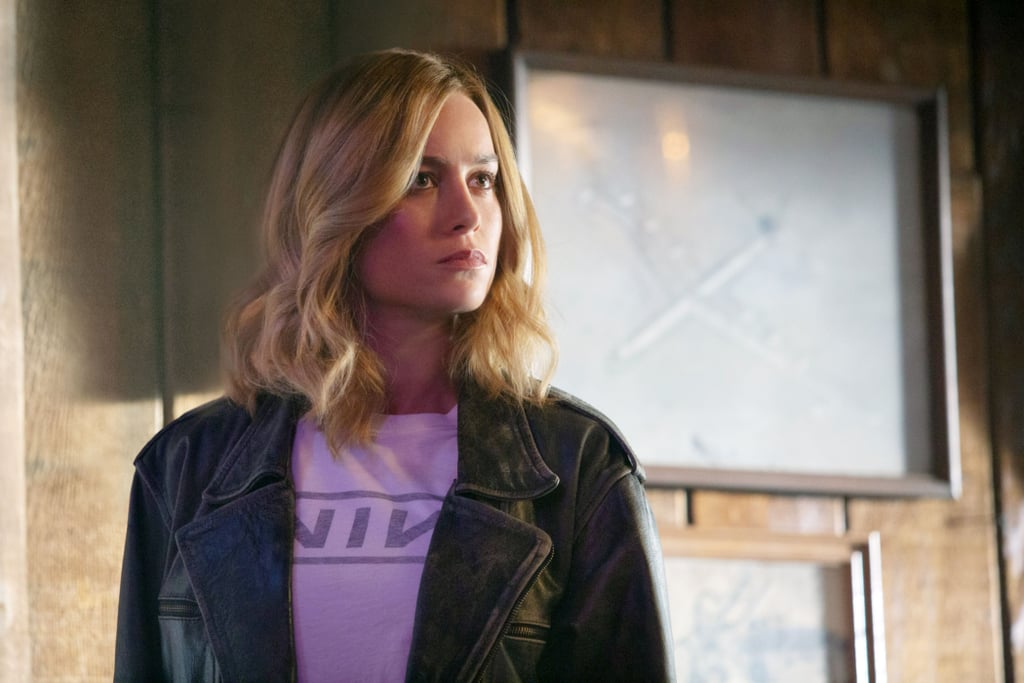 Outfitting the lead hero in a Marvel movie sounds like both the most interesting job, and the most challenging one, which we confirmed when we hopped on the phone with costume designer Sanja Milkovic Hays to discuss all the ins and outs of dressing Brie Larson's Captain Marvel. Spoiler alert: it's far more complex than you might realize.

Although deciding what kind of suit the character would wear while kicking intergalactic ass was relatively simple — Hays worked with Marvel to craft one that paid homage to the comics without looking "like a bathing suit" — choosing the low-key street clothes Carol would have to navigate Los Angeles in while chasing after the Skrulls proved to be a bit trickier. (Especially when it came to picking the band logo that would be displayed on her t-shirt.)

Related:
The Captain Marvel Soundtrack Is Packed With '90s Throwbacks

As we see in the film, shortly after Carol crash-lands on earth in her black and green Kree supersuit, she realizes that she's in need of 1) transportation, and 2) an undercover outfit, so that clever young S.H.I.E.L.D. agent Nick Fury has a more difficult time tracking her down. Rather serendipitously, she finds both in a strip mall parking lot: she steals a motorcycle from a sexist biker who asked her to "smile" for him, and then expertly steals a full outfit off a fashion store mannequin. Rather than putting her in "neon spandex or something equally silly," Hays said they settled on grunge being Carol's preferred aesthetic.

Thus, Carol's now-iconic outfit of a Nine Inch Nails t-shirt, loose-fitting jeans, a black leather jacket, and a flannel tied around her waist was born. Does it mean Carol is humming "Hurt" just offscreen? According to Hays, not exactly:

"There was a lot of back and forth [about which band would go on her shirt], because we thought about the music, but we also had to look at the logos. We looked at some logos of bands, and some of them are very busy and colorful and stuff like that, so even though their music could be appropriate for the character, it would be too distracting from her face. But Nine Inch Nails was kind of sweet and subtle. It's there, but your eyes don't keep going down, dragging your attention from her face."

So, there you have it! If you want to pick up a replica of the hero's signature t-shirt for yourself, they retail for $25. A small price to pay to look like Carol Danvers, eh? If not, feel free to keep scrolling to see Carol's best scenes in the NIN tee, ahead.