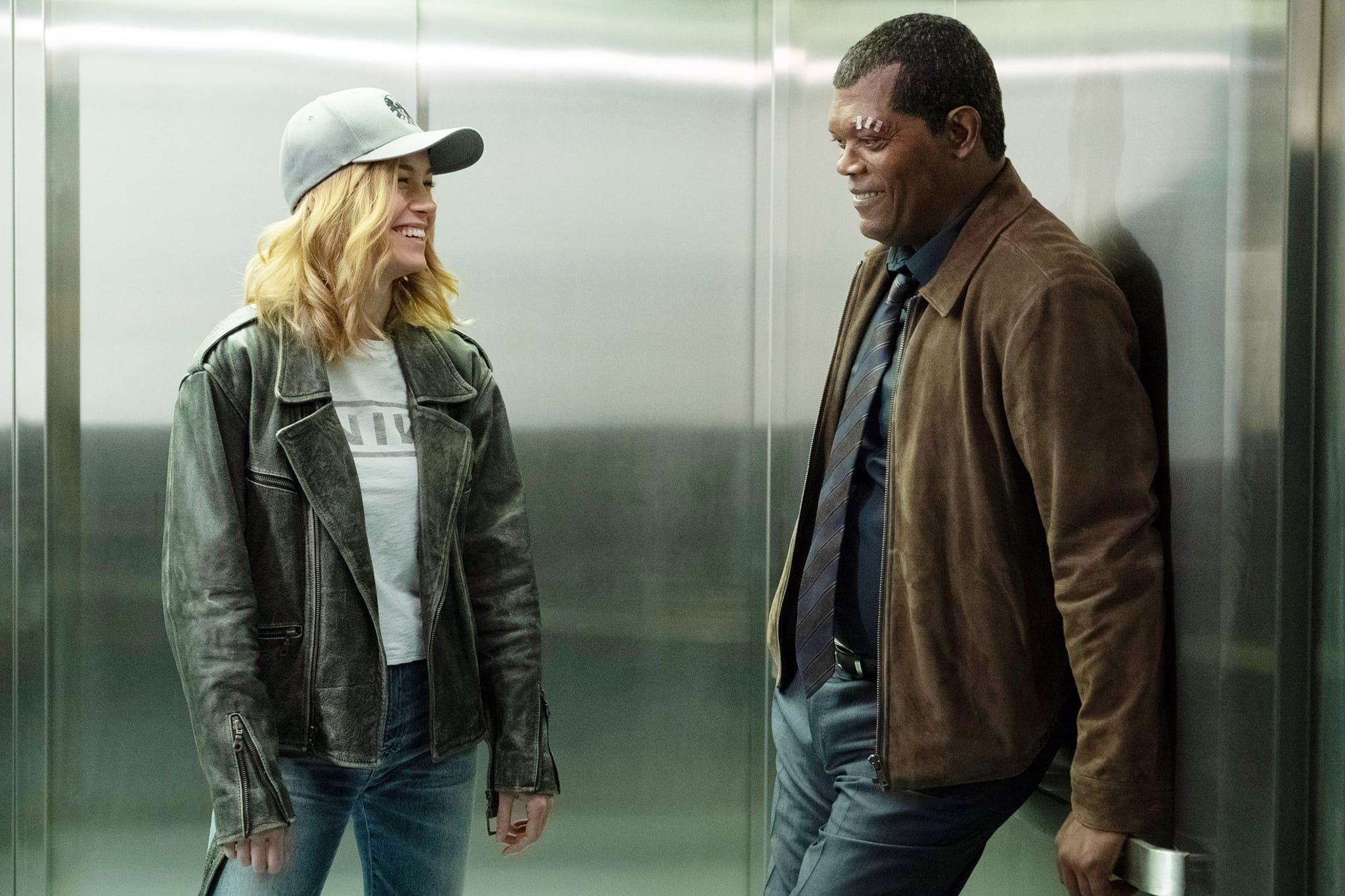 When I first found out that Captain Marvel would predominantly take place in the '90s, I had a few questions. First, if Carol Danvers would be bopping around Los Angeles in 1995, how would she ever travel forward in time to save the Avengers in 2018 following Thanos's infamous snap? How would a young Nick Fury fit into the equation? And — fingers crossed — would there be any recreations of Cher Horowitz's many outfits in Clueless?

While I've since found out the answers to all three questions — apparently Carol can time travel, is best friends with Fury, and prefers grunge to yellow plaid — I still had a few things on my mind about how Captain Marvel's costume designer, Sanja Milkovic Hays, made Brie Larson's superpowered alien look not only like a relatable, passable human, but also one whose wardrobe I would happily raid today in 2019.

I hopped on the phone with Hays just in time for the film's release, where she filled me in on everything from why she decided Carol would be a Nine Inch Nails fan to the touching history behind her signature bomber jacket.

Related:
Bring Tissues to Captain Marvel, Because Its Bittersweet Stan Lee Tributes Will Make You Sob

POPSUGAR: I know that you've worked on a lot of male-dominated action films, like the Fast and Furious franchise and the Maze Runner films, so what was it like outfitting a female hero this time around?

Sanja Milkovic Hays: It was very different, of course. It's fun, but there are different issues, you know. We had to fit things to make sure she looked like a serious superhero, a serious warrior, and yet keep her looking feminine and like a woman. The whole balance was kind of an interesting exercise. But I was very lucky that Brie looks like a goddess. [Laughs.] That was not that difficult. It was much more involving, because of the demands of her role; we tried to really put a lot of time and effort into making her feel as comfortable as possible. We knew that she'd have to shoot for such a long time, doing everything from jumping to running. It was also interesting because she'd come to a fitting, and [I'd be like] 'OK now, her body has changed from her exercises,' and we would do things to accommodate that.

PS: The suit looks really true to the comics, but I imagine there were still a few updates made to it to modernize the look — was that something you worked on yourself, or was it a bigger, more collaborative effort?

SMH: The first sort of translation from the comics to the costume was done in Marvel's digital development department, they did the concept drawings of the suit. And then when I came on board, we continued tweaking the details and the shapes. We worked with her actual body, and [the way she moved] . . . her body changed drastically while filming, so it was a lot of tweaking. But the conscious decision was made at the beginning that the version of her suit — because there are many versions in the comics of her costumes — that we not make it like a bathing suit-type, as they say.

PS: How did you go about choosing the street clothes Carol wears, since it's a decade as iconic as the '90s? It has everything from grunge and plaid to bright colors and neon.

SMH: There was a lot of talk about that, because the '90s, as you know, were quite fashionable. We were trying to figure out something that looks '90s, but that's still attractive to the audience, and still fashionable. We looked through a lot of research of the '90s, and decided a character like her, that grunge is the way to go. We see her at a rock 'n' roll concert, and wearing '80s band t-shirts, so to keep it to that almost tomboyish image and attitude that she has, we decided that rather than going for neon spandex or something equally silly, that grunge was the best way to go. She ended up looking really cute in that [t-shirt and leather jacket]. In the end I think it was the right decision. There was also a lot of talk, of course, of choosing the band [that would be on her t-shirt].

PS: Yeah, was there a particular reason you chose Nine Inch Nails?

SMH: There was a lot of back and forth, because we thought about the music, but we also had to look at the logos. We looked at some logos of bands, and some of them are very busy and colorful and stuff like that, so even though their music could be appropriate for the character, it would be too distracting from her face. But Nine Inch Nails was kind of sweet and subtle. It's there, but your eyes don't keep going down, dragging your attention from her face. PS: I also really loved the nameplate necklace that Lashana Lynch's character, Maria Rambeau, wears, which is a nice nod to the era — was that something you had custom-made for the film?

SMH: We actually found that! We were looking for it, obviously, and would've probably made it if we didn't find it. But yes, we got that, which was great because it's a special touch to a mother whose daughter is the center of her life. We knew that would be something that she definitely would have had. Of course, we did a lot of talking to Lashana about that.

PS: She looked great. By the end of watching the movie, I was convinced that I needed a flight-suit like hers.

SMH: I know, she just looks great, right? That's all her. Her acting, her attitude . . . she looks like a real pilot. She looked great, but looked like a real pilot, not like a character. Both girls are amazing, and it was so great to work with them.

PS: Since costumes can play a key part in communicating messages about a character that a casual viewer might not pick up on at first — was there any instance of that in this film? Or explicitly, any special details on Carol's suit that we might have missed?

SMH: That's an interesting question. Wow, that's very interesting. Yes, there actually was. Her jacket doesn't show up as much in the movie as I was hoping for, but her jacket. There was a lot of talk about her brown bomber jacket, that at the end of the movie you see her put back on. [Editor's note: Carol has a brown bomber jacket that is returned to her by Maria Rambeau's daughter, Monica, when she comes back to earth.] That jacket has a history, actually. We took this brown '40s jacket . . . you know the way in the '40s, how pilots had their plane's insignia or artwork on their backs, a lot of times, in the second World War. The artwork that was on their backs would be something cartoony, but in her case it was a fighter plane. The idea was that possibly that jacket had been from her grandfather, or something like that. Like she has something that's in the family, like a vintage '40s jacket that had been passed down from her grandfather. Obviously that never ended up in the story, and ultimately wasn't necessary, but it was one of those things that made it a little bit more interesting. It gives her history.