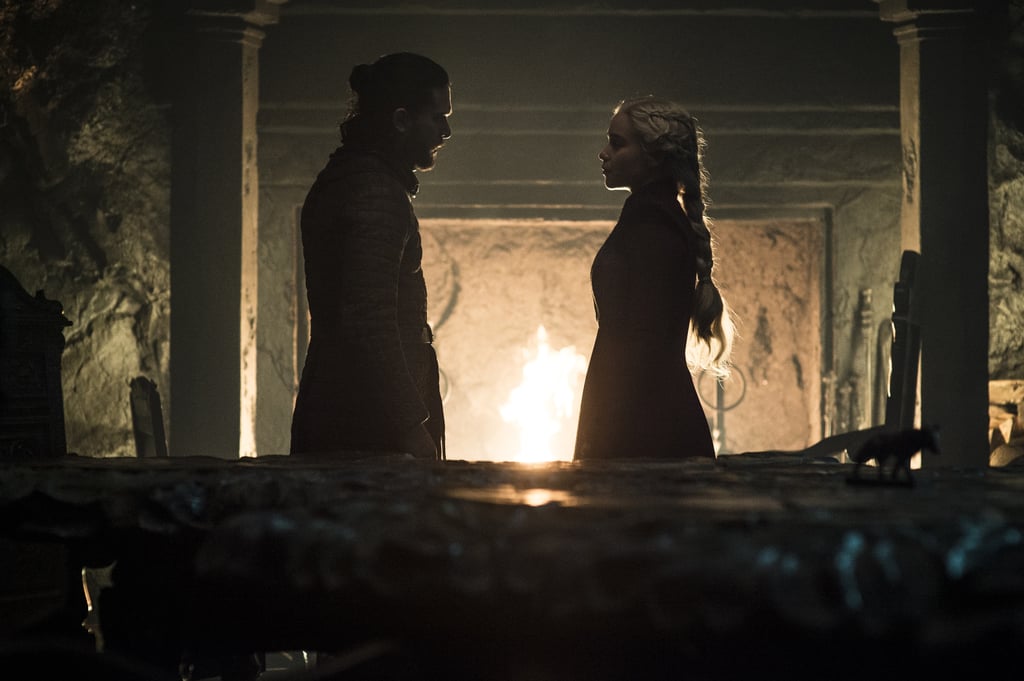 Did You Catch Daenerys's Final Words to Jon Snow Before the Battle at King's Landing?

Warning: A whole bunch of Game of Thrones spoilers ahead!

Daenerys Targaryen makes quite a few surprising decisions in the latest episode of Game of Thrones, so as we wait to find out where in the world things are headed in the series finale, it's worth revisiting her fireside conversation with Jon Snow. She feels betrayed by Jon because she found out that he told Sansa and Arya Stark about his lineage after swearing he wouldn't, and although he insists that Daenerys is still his queen, that isn't enough for her. The pair speaks soon after Daenerys sentences Varys to die, dropping a "Dracarys" and ordering her dragon to kill him, and she tells Jon that Sansa killed Varys as much as she did.

"This is a victory for her," Daenerys says of Sansa. "Now she knows what happens when people hear the truth about you." She adds, "Far more people in Westeros love you than love me. I don't have love here. I only have fear." In response, Jon tells her that he loves her, saying, "You will always be my queen." At that, she stands and goes to him, saying, "Is that all I am to you? Your queen?" Daenerys kisses Jon, but he ends up pulling away, and before he can say anything, she steps back. "Alright then," she says. "Let it be fear."

What does she mean by that? On the one hand, she may be stating that Jon, too, is afraid of her — afraid of what she'll do, or maybe afraid of continuing to let their relationship be romantic knowing that she's, well, his aunt. Beyond that, though, perhaps that's the moment when she feels that love no longer exists for her — either with Jon or the people of Westeros. She feels she has nothing left but the power to instill fear. As cocreator D.B. Weiss puts it on this week's "Inside the Episode," Daenerys is "resigning herself to the fact that she may have to get things done in a way that isn't pleasant."

Fans took to Twitter to weigh in on Daenerys and Jon Snow's conversation, asking all the inevitable questions. Like, for starters, what the hell is he going to say to her after she completely destroyed King's Landing, killing all those innocent people? Keep reading to see what viewers have to say about Jon and Daenerys's dynamic on Twitter, then check out fans' reactions to her Mad Queen fate.

Related:
Does Cersei's Prophecy Actually Come True on Game of Thrones? Let's Get Into It
Previous Next Start Slideshow
Game Of ThronesTV