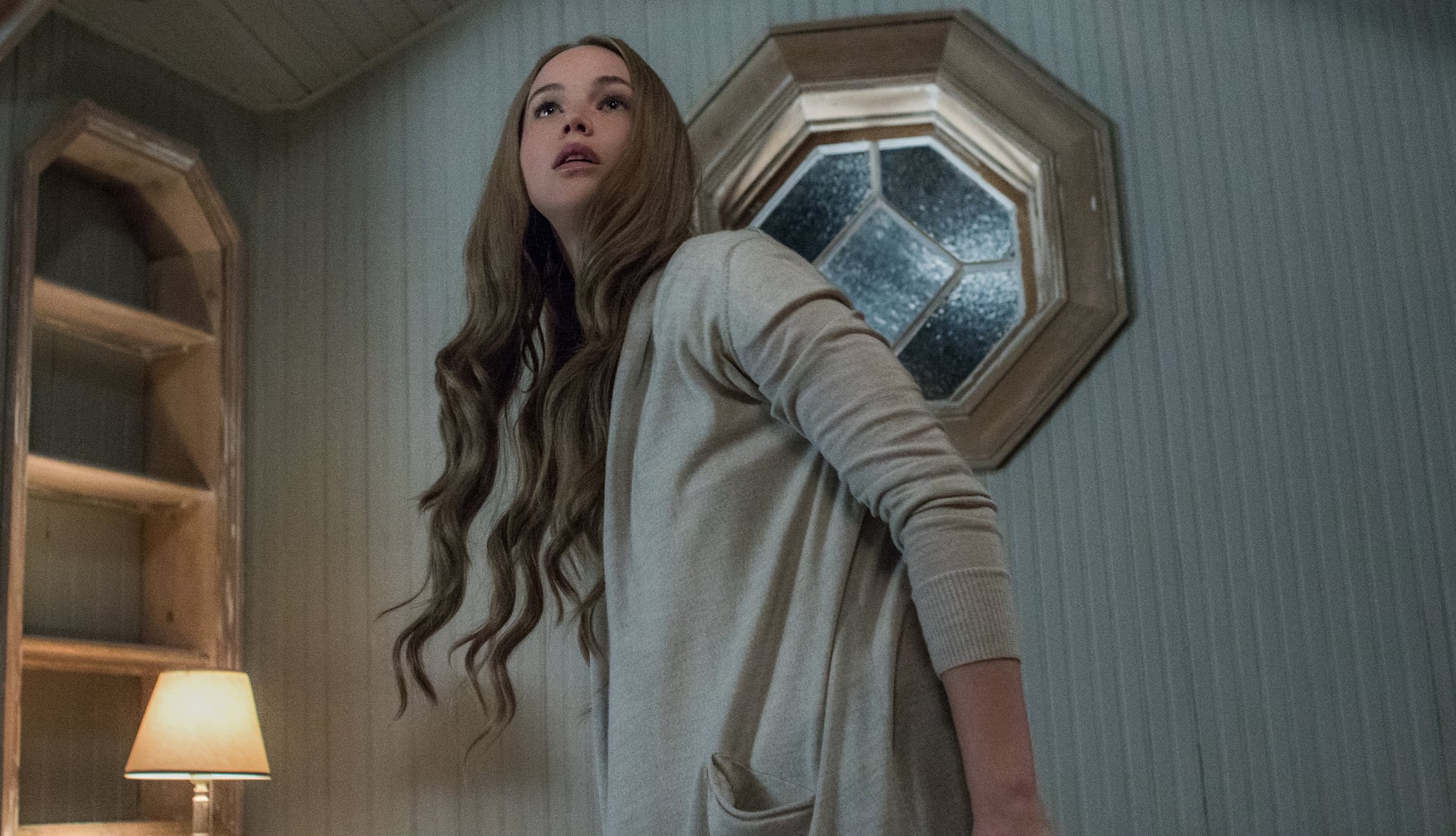 Mother!, starring Jennifer Lawrence, is poised to be one of the most-talked about films of Fall. Director Darren Aronofsky has delivered a provocative — if head-scratching — think-piece, and though the marketing campaign has been all about mystery, once audiences see the film, there will be many conversations and interpretations of what the film means. If, however, you want to hear what the director himself has said the movie means, keep reading — or turn back now if you haven't seen Mother! yet and don't want to be spoiled. 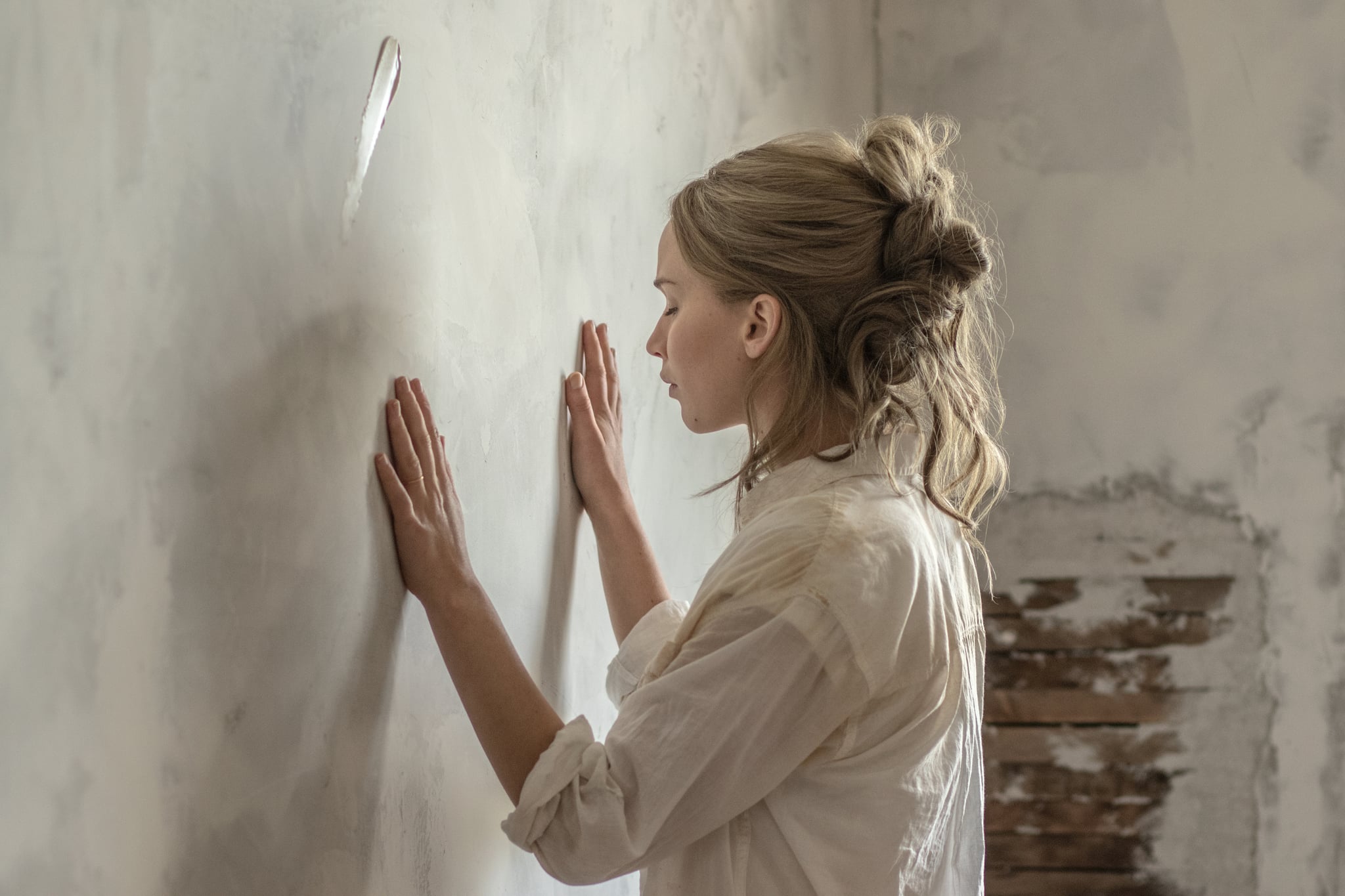 In Mother!, Lawrence plays the young wife of a poet (Javier Bardem), living in a huge house in the middle of nowhere, a house she has painstakingly renovated herself. When a strange man (Ed Harris) comes to their home, the husband (known as "Him") invites him to stay. Then the man's wife (Michelle Pfeiffer) shows up too, and little by little, the "guests" disturb, pick at, break, and generally destroy the house — and the quiet. More people show up. More destruction ensues. Lawrence's character screams over and over for people to stop, for everyone to get out — but no one listens to her, and finally, everything she loves is destroyed. She is destroyed.

Related:
Why Jennifer Lawrence Said She Probably Wouldn't Make a Movie Like Mother! Ever Again

As much as this could be horror movie about how terrible it is to have houseguests, Aronofsky describes this film as an allegory. At the Q&A at the film's Toronto International Film Festival premiere, Aronofsky explained, "I wanted to make a film from the point of view of our mother, and I don't think the story of our journey with our mother is over yet, so this is very much a cautionary tale as well as reflection." He noted that he had gotten a text that day about how ironic it was that Hurricane Irma had touched down on the same night Mother! premiered at Toronto. "We're seeing this all around us, so I was inspired to use my passion of what I feel about that."

Once you know that, it all falls into place, and it's easy to see how the Bible and the Book of Genesis, God, Mother Nature, and the planet are all represented. The characters' names become dead giveaways: Bardem's character is "Him," which makes him God. Lawrence, then, is not just the mother in this film, but the "mother" of us all — and she and the house are the gift of the planet/home we have been given, which we continually destroy without thought. The movie explicitly gives us the perspective of mother (the camera is almost always on Lawrence's face or showing what she's seeing), so we are feeling the annihilation of her home — our home. Lawrence brought that into her performance, saying, "I found the biggest tool for me was the connection, the idea that the house and I were the same organism."

Though the allegorical nature of the film has been hidden from Mother!'s marketing campaign, Aronofsky said that his stars knew what was going on. "Everyone was aware of the allegory, the actors were, but there was also a real story going on, which I wanted to ground the audience." Harris and Pfeiffer are meant to be the Adam and Eve in the story (though they are credited as "Man" and "Woman"), and their portrayal is far from flattering. They "take, and take, and take," the same way Pfeiffer describes what children do to you. Of course, their intentions start out somewhat positive, but it's what they bring into the house that leads to its destruction. The director said that that helped inform Pfeiffer's acting: "I thought about Adam and Eve, and what was Eve? Eve was mischievous. And that's kind of where she started and sort of took it that way." Adam and Eve even have two unnamed sons who are at each others' throats — the Cain and Abel of the story.

The movie ends with the mother's death and the house annihilated, hence the cautionary tale Aronofsky has written. The director posted a pointed tweet the day after the film's premiere, referencing The Giving Tree.

Aronofsky's film may be a little heavy-handed once you know what his intention is, but whatever you think of Mother!, it's certainly a film that's fun to unravel. The movie opens on Sept. 15.