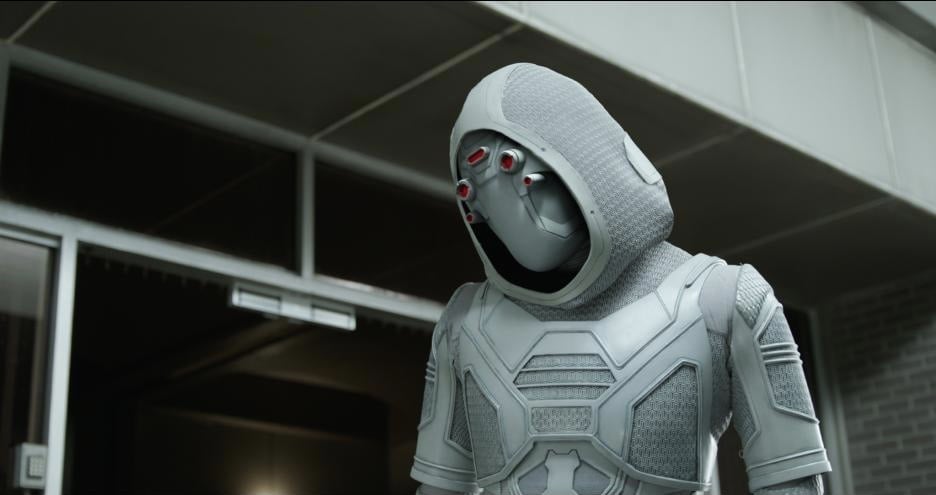 If you haven't heard of Ant-Man's new nemesis, Ghost, before, that's because Ant-Man and the Wasp is Ghost's live-action debut. Ghost has been around for a while, mostly tormenting Tony Stark, but even in the Marvel comic book world, Ghost's identity has always been purposefully ambiguous. Ant-Man and the Wasp director Peyton Reed saw Ghost's debut on the movie screen as the perfect opportunity to re-envision Ghost's motivation and purpose.

One thing Reed did know for sure? He wanted to make his Ghost, who has traditionally been portrayed as male in the comics, a female. Hannah John-Kamen is taking on the role of Marvel's latest villain in the upcoming film, but even comic book readers aren't sure what to expect in Reed's reimagining. To get you prepped, here is everything we know about Ghost so far.

Related:
You May Not Even Need a Bathroom Break During Ant-Man and the Wasp

How Does Ghost Get His Powers?

While working as both both a programmer and an engineer at an IT company called Omnisapient, Ghost develops a revolutionary processor, Ghost Tech, that can avoid overheating by becoming intangible. When Ghost's lover dies in a violent explosion at her apartment, Ghost becomes depressed and copes by wiring his own flesh with his flux-state processors, effectively immersing his consciousness into the data networks he had created.

In this state of alpha, Ghost can piece together random pieces of data, and he realizes that his lover hasn't been killed in a freak accident, but has been murdered by Omnisapient. The IT company sends a hitman to kill Ghost as well, but made intangible by the flux-state processors fused with his body, he survives. After exacting his revenge, Ghost erases all records of his previous life, and he dedicates himself to destroying other tech companies and business tycoons, starting with Tony Stark's enterprise.

What Abilities Does Ghost Have?

Like Tony Stark's Iron Man, Ghost wears a battle suit of his own design. The suit's Ghost Tech enables him to turn himself and any objects he touches either intangible or invisible (though not at the same time). His suit also enables him to hack and reprogram all electronic systems in his vicinity, as well as tamper with any electromagnetic signals. For weapons, Ghost invents guns that fire bursts of electricity and force blasts, and Ghost also has an arsenal of self-targeting grenades and sound-activated bombs.

How Does Ghost Tie Into Ant-Man and the Wasp?

Though Ghost spends decades menacing Tony Stark, the anticapitalist supervillain is focusing his anarchy on Ant-Man in Marvel's upcoming film. Though it hasn't yet been revealed what the tie between Ghost and Ant-Man is, Ghost is most likely after former business tycoon Dr. Hank Pym, whose Pym particles give Ant-Man's suit its power.

Whatever Ghost's motivation may be, we know we can't wait to see these Marvel characters face off (as well as to meet this new-and-improved female Ghost!). We're sure Tony Stark will at least be grateful for the break from Ghost's meddling.

Movies
The After Franchise Is Expanding! Get Ready For 2 More Movies
by Monica Sisavat 14 hours ago

Downton Abbey
Downton Abbey 2 Is Officially in the Works, and It's Releasing Sooner Than You Think
by Kelsie Gibson 18 hours ago