It seems like Arya Stark has been at Winterfell for only a day on Game of Thrones, but she is already on to Sansa and Littlefinger. In "Eastwatch," Arya observes that Sansa doesn't really defend Jon Snow to his critics in Winterfell, and she also takes note of Sansa's suspicious relationship with Littlefinger. This leads to Arya coming across something that makes Sansa look even more untrustworthy.

After trailing Littlefinger, Arya breaks into his room and reads a scroll that was hidden in the mattress. But because everything is moving so fast, you might have missed what, exactly, was in it. Sadly, things aren't looking good for Arya and Sansa's relationship.

The letter is actually from season one, when Cersei forced Sansa to write Robb and Catelyn Stark to break some big news and urge them to come to King's Landing. It reads:

Robb, I write to you with a heavy heart. Our good king Robert is dead, killed from wounds he took in a boar hunt. Father has been charged with treason. He conspired with Robert's brothers against my beloved Joffrey and tried to steal his throne. The Lannisters are treating me very well and provide me with every comfort. I beg you: come to King's Landing, swear fealty to King Joffrey and prevent any strife between the great houses of Lannister and Stark. Your faithfull sister, Sansa. 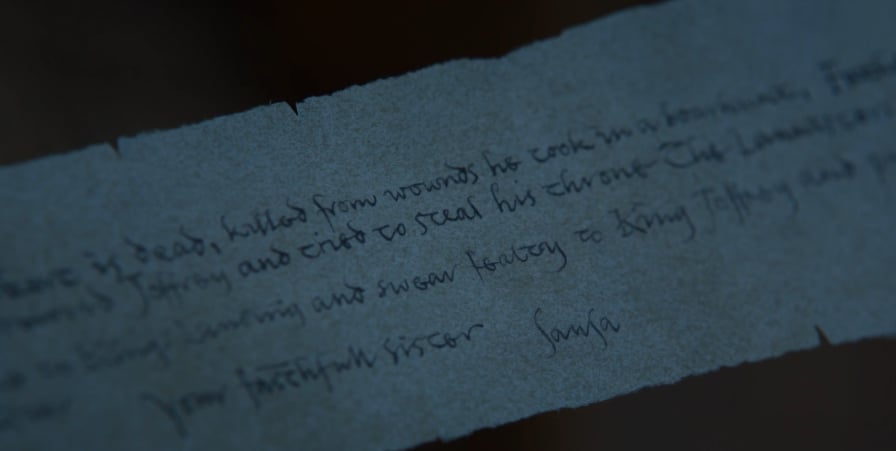 It's obviously a trap. This didn't work originally, and Robb and Catelyn knew it was a sign that Sansa was being held hostage by Cersei. However, Arya is already suspicious of her sister, and this could drive a greater wedge between them.