Ever since the very first episode of Game of Thrones, we've gotten glimpses of some darkly magical creatures. In addition to dragons and giants, we've also seen those tall, scary men with blue eyes (literally) frosted tips, who are frequently followed around by a pack of crazy skeleton-zombies: White Walkers and wights. They're both are featured prominently (and terrifyingly) throughout the show. The Game of Thrones world can be remarkably confusing if you haven't read the books (even if you've been watching for all eight seasons!), so let's take a minute to clarify what exactly these figures are. (Note: this is an explanation of the creatures based on what the TV series has shown of them thus far, not based on what George R.R. Martin's novels have said.)

Related:
Where Exactly Are the White Walkers on Game of Thrones? Closer Than You Might Think 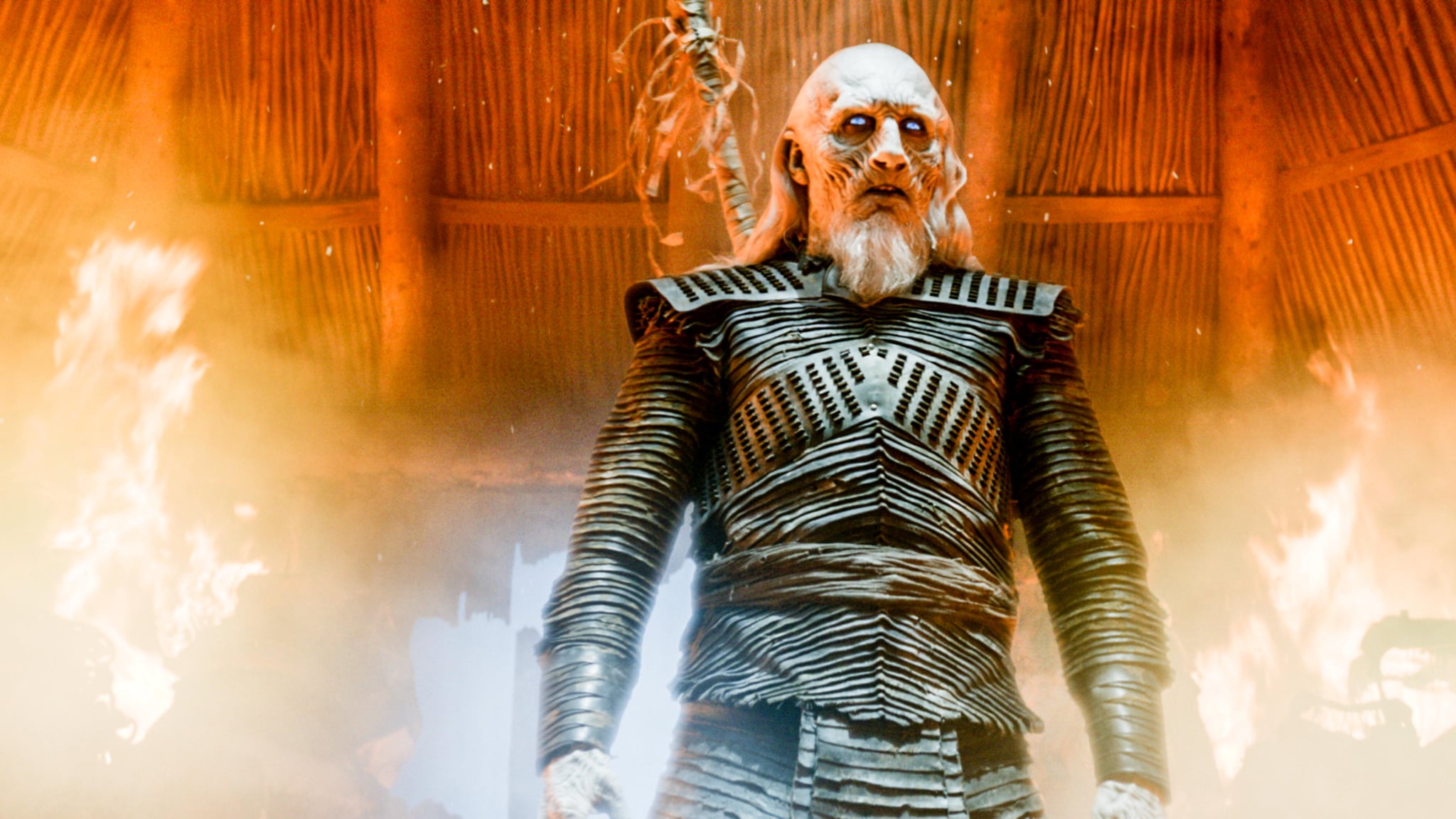 Created by the Children of the Forest in an act against the First Men, and led by the legendary Night King, White Walkers may look vaguely human-like, but they are far from it. Often appearing on horses, they are much taller than humans and have wispy white hair, a mummy-like appearance, and glowing blue eyes. Their presence brings a chill, and they can freeze things with a mere touch. This makes them extremely hard to battle, because they can freeze and shatter swords. Luckily they aren't impossible to defeat: Jon Snow is able to shatter a White Walker with his sword, Longclaw, because it's made of Valyrian steel. Dragonglass (obsidian) and Valyrian steel are basically kryptonite to White Walkers.

These supernatural beings, neither dead nor alive, are bad news because of their ruthless battle tactics and also the dark magic they possess. The exact way the Night King's magic works is still a bit of a mystery. From what we've seen, though, he's able to wield his force on both dead things and living creatures — he can bring back deceased people (and dragons), but we've also witnessed him turn a regular human baby into what seems like a White Walker. This chilling power is what leads us to our next question: what is a wight?

Related:
Is the Night King a Targaryen? Here's Why Some Game of Thrones Fans Think So

One of the scariest abilities White Walkers have, like we mention above, is the power to create creatures known as wights. Wights are reanimated corpses, like zombies, who are under the control of the White Walkers. The physical condition of the wight depends on what their body looks like when they're turned. So if a body has been dead for months and a White Walker turns it, it's going to be bony and decayed (like in the GIF above). At the end of season five's "Hardhome" episode, the Night's King turns an entire village of Wildlings (including this Pitch Perfect star) into wights. Since they're all newly dead, they retain their mostly human appearance.

The big physical difference is that no matter what color eyes the person had while they were living, all wights have glowing blue eyes to match the White Walkers'. The only way to destroy a wight is to burn it or stab it with dragonglass, which is why Wildlings burn their dead. These guys are also bad news.

There are a small number of White Walkers, and they possess terrifying powers. Wights are a product of White Walkers, and they're essentially undead pawns that the White Walkers use to fight their battles. As we learn in season seven, if you kill a certain White Walker, you also kill the wights it created — which is why Jon is so hellbent on going after the Night King. As the final battles of the series inch closer, we're left wondering if this theory will indeed be what saves Westeros from a repeat of the Long Night.