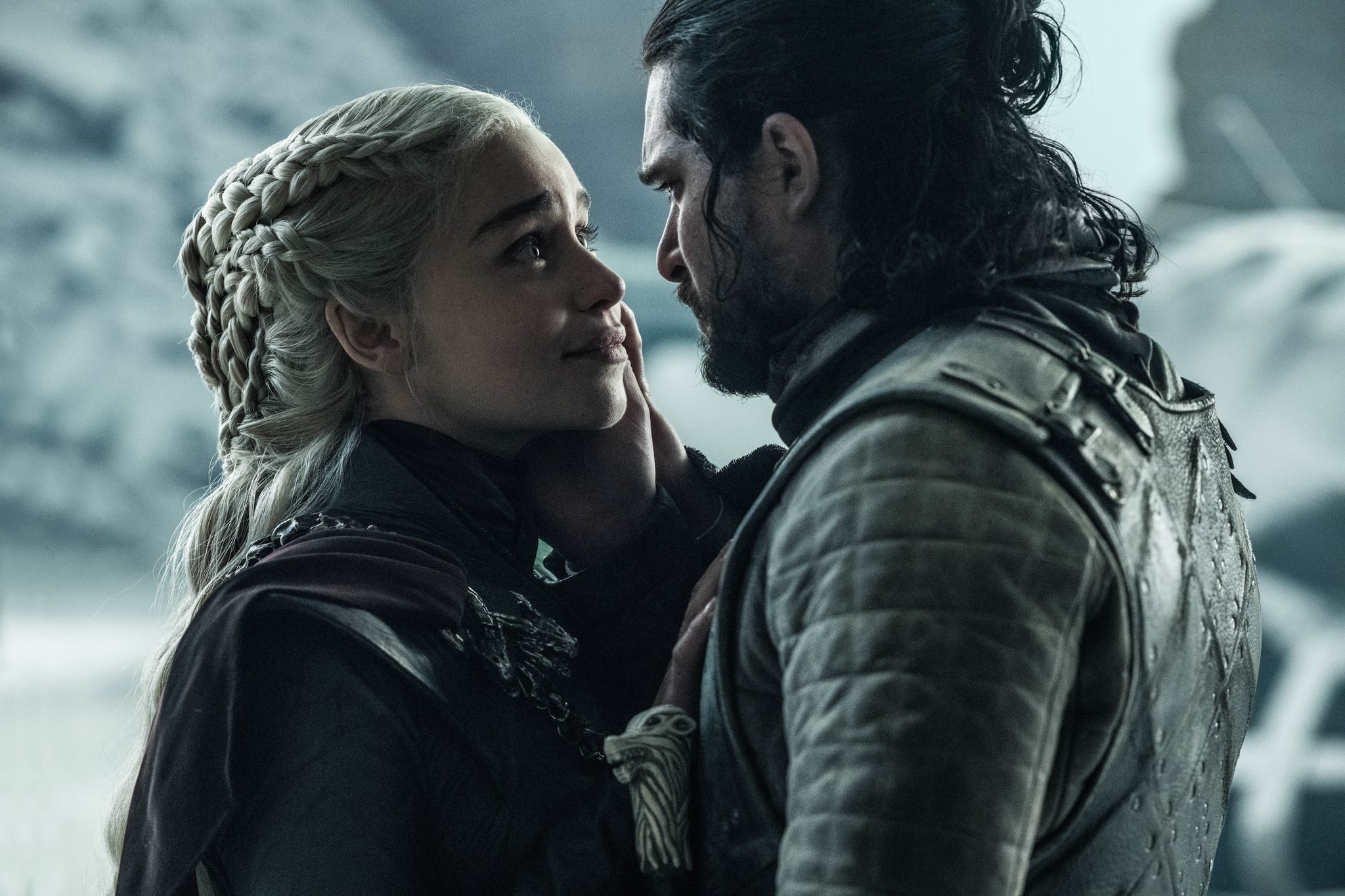 Warning: SO MANY Game of Thrones spoilers ahead!

The climax of the series finale of Game of Thrones centers on the death of the Dragon Queen by the man she loves, soon after she wins the one thing she's wanted most of her entire life: the Iron Throne. Daenerys begins her journey to Westeros with an army of Dothraki, Unsullied, Ironborn, and the cleverest men in Westeros as her advisors, but in the end, none of them can protect her against her greatest threat, who turns out to be her lover (and nephew) Jon Snow.

The beginning of the end starts immediately after the Battle of King's Landing. While Jon, Davos, and Tyrion can only see the destruction Daenerys has wrought over King's Landing, the conqueror and her forces only see liberation. "Women, men, and children have suffered too long beneath the wheel," she cries out to her gathered forces during a speech to praise their victory. "Will you break the wheel with me?"

Tyrion, fresh from discovering that his siblings died attempting to escape the Red Keep — and also just over the chaos that he has enabled — abruptly resigns from his position as Hand of the Queen. Daenerys has him imprisoned for committing treason (since he did help Jaime escape when her soldiers found him trying to sneak into King's Landing) and plans to have him executed like Varys before him. When Jon goes to talk to the former Hand, the Lannister attempts to warn him that Daenerys has no plan on stopping her crusade of "liberation" with King's Landing.

"Varys was right, I was wrong. Our queen's nature is fire and blood," Tyrion tells the younger man. "Everywhere she goes, evil men die, and we cheer her for it. And she grows more powerful and more sure that she is good and right." Disregarding the fact that Tyrion doesn't understand Valyrian and thus would only be able to glean Daenerys's intentions through her passionate facial expressions, he's right on the money about the queen's desire.

Daenerys has vowed not to let her army lay down their spears until people all over the world are liberated, as she has done in King's landing. Though Jon cannot comprehend hurting his aunt and lover, Tyrion continues to push him to do the "right" thing. "Sometimes duty is the death of love," he says, a twisted echo of Aemon Targaryen's words to Jon in an earlier season. 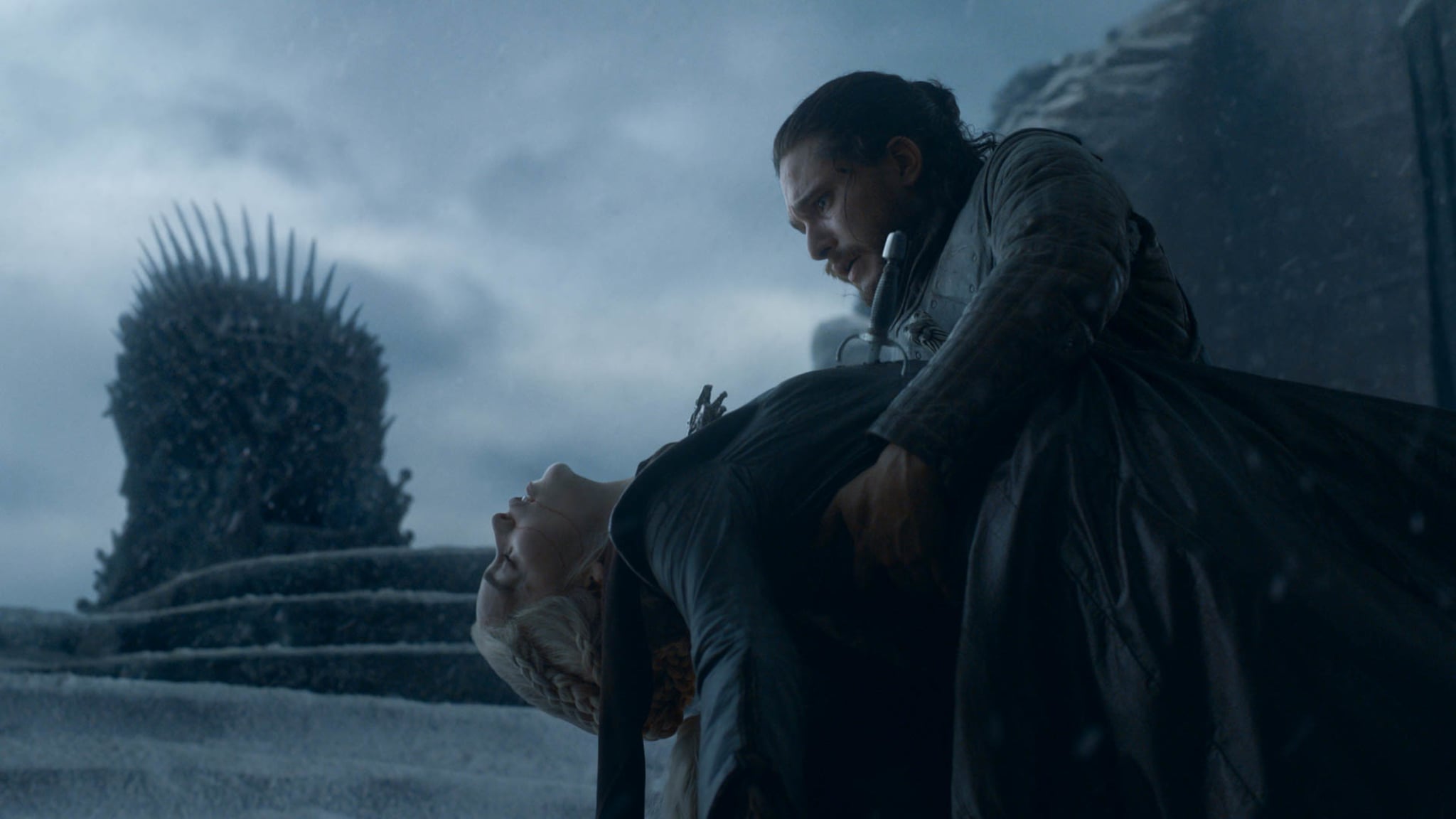 When Jon goes to talk to his aunt about her plans, the conversation doesn't go the way he intends. His pleas for mercy don't move Daenerys, as she's played that game before. "We can't hide behind small mercies. The world we need won't be built by men loyal to the world we have," she says. "It's not easy to see something that's never been before. A good world." But when Jon asks his aunt about the other people who believe they also know what is good, Daenerys mistakenly doesn't sense this is a test and that her ruthlessness will turn Jon against her, telling him, "They don't get to choose."

For a man like Jon, who has been a victim of those who don't believe in giving choices, it's the wrong answer. He lures Daenerys into a false sense of security, pulling her into a loving embrace and drawing her into a kiss. "You are my queen, always," Jon reminds Daenerys, just before he stabs a knife through her stomach and watches as the life slowly leaves her eyes. Sure, he sobs as he lays her lifeless body in front of the Iron Throne and seems pretty torn up about it, but still. What a cold way to bring her down. But in that cosmic way that only Game of Thrones can make sense of, it's inevitable. Only a dragon can kill a dragon. (Metaphorically, and destiny-wise. We've already seen that spears and other sharp weaponry can take down dragons.)

Related:
We're Majorly Questioning This 1 Moment in the Game of Thrones Finale

Ironically, Jon has become more like the Lannister sons than he ever wanted to: by killing Daenerys, he is now a Queenslayer and a Kinslayer. Though Grey Worm and Daenerys's forces take Jon prisoner for the murder of their queen, he is later released by the new King and his Hand. By Bran's decree, Jon is sent to live out the rest of his days as a man of the Night's Watch. "The world will always need a home for bastards and broken men," Tyrion says when he breaks the news to a weathered Jon.

At the end of the episode, Jon reunites with Ghost and Tormund, and the Free Folk head beyond the Wall. Considering the fact that the former King in the North has been attempting to get rid of his many titles for a long time now, it's probably the best ending he could have asked for.