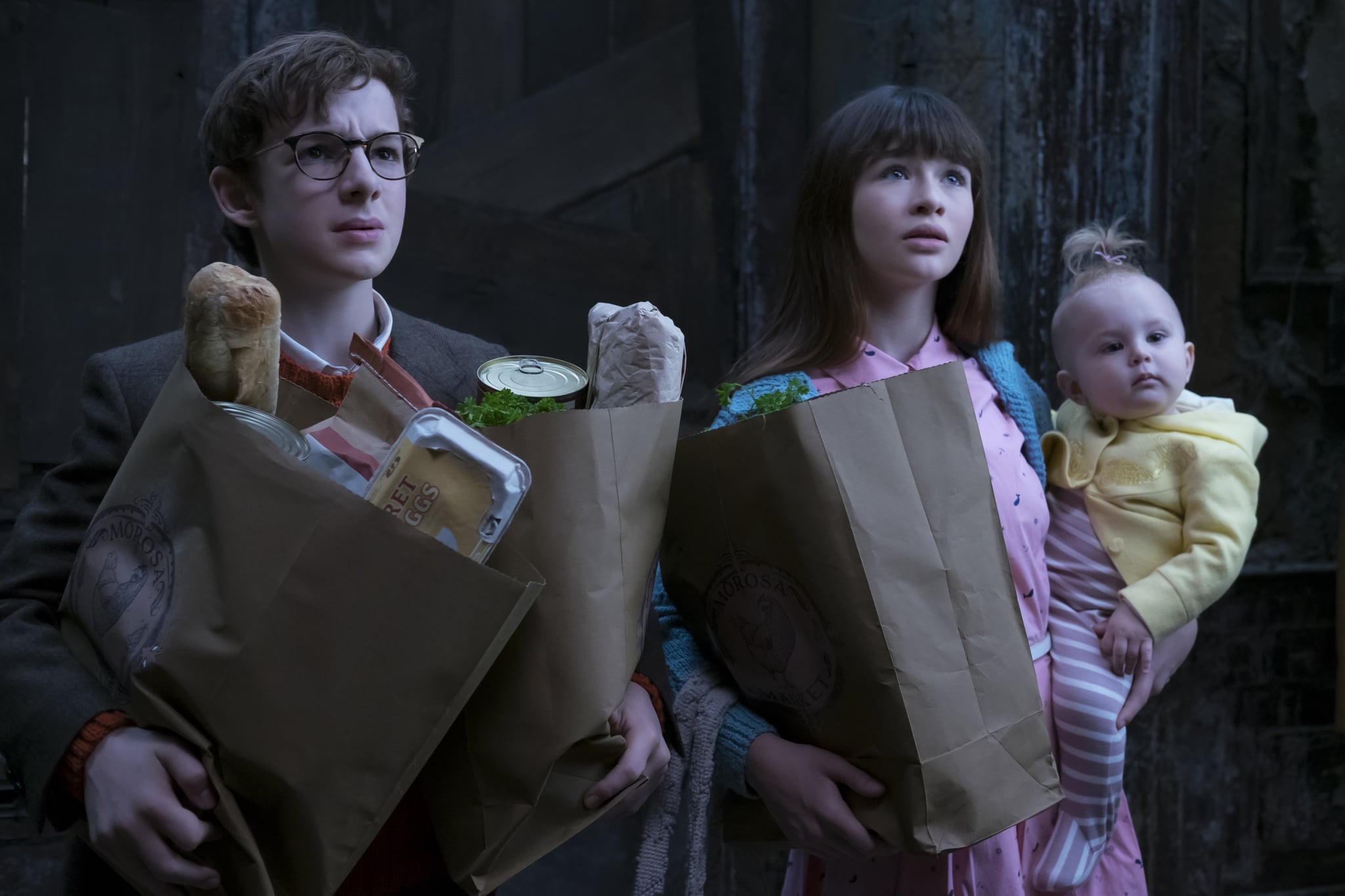 Warning: spoilers for the entire season below!

Netflix's A Series of Unfortunate Events premiered on Friday the 13th (apt, don't you think?) in January, and there's a lot to love. Neil Patrick Harris gives an inspired performance as the show's greasy villain, Count Olaf, and newcomers Malina Weissman and Louis Hynes (who play Violet and Klaus Baudelaire) are a delight. At the end of the first episode, we also get a pleasant surprise in the form of two unexpected guest stars: Will Arnett and Cobie Smulders, who play a mother and a father. Now, it's very easy to assume that these are the Baudelaire parents. Once you get to the end of episode seven, you'll learn that's sadly not the case. Let's recap.

Episode one starts off with the brilliant Baudelaire children being informed that they're orphans now after their mansion burns down, with their doting mother and father — Beatrice and Bertrand — presumably perishing in the blaze. They're sent to live with Count Olaf, a distant relative whose only goal is to get his hands on the Baudelaire family fortune. Not only is he violent, but he forces them to cook and clean for him and his band of cronies and makes the three of them share a dirty, decrepit bedroom. In other words, it's just as unfortunate as the show's title might suggest. At the conclusion of the first episode is a ray of hope for the siblings, however, when it's revealed to the audience that two parents are alive, but in captivity. Oh, and they're "worried about the children." The final scene shows them handcuffed in the back of a van that zooms off into the night.

As the episodes roll on, all signs point to the parents being Bertrand and Beatrice Baudelaire. That is, until we reach episode seven, "The Miserable Mill: Part I." Here, we come to a moment where it seems like the Baudelaire children and their parents will finally reunite . . . but they don't. That's because Arnett and Smulders are not the Baudelaire parents at all. They're actually the parents of the Quagmire triplets. Without giving too much away, the Quagmires are another set of unfortunate children in Lemony Snicket's world. They also lose their parents in a horrible fire and first enter in book five, The Austere Academy. The Baudelaires meet Isadora and Duncan there; Quigley, the third triplet, is thought to have perished in the fire with his parents until a later book.

While an appearance by the Baudelaire parents would be a huge departure from Lemony Snicket's novels, this is still a pretty big addition. It's not exactly a change, per se; after all, the Quagmire parents still seem to be dead by the end of the season. Rather, the real change is that we never actually meet the Quagmire parents in the books at all. That means, if anything, the series has successfully enriched a bit of backstory we never got. The tragic part of this twist, though, is that the Baudelaire parents really do seem to be dead after all.

If you look to the books, it's never technically made clear whether both Baudelaires did, indeed, perish in the fire on that dreary day. One of them is rumored to have survived. Convincing theories seem to point to their mother, Beatrice, but note that she likely died soon afterward, sometime between books two and 12, The Reptile Room and The Penultimate Peril. The cause of her death is supposedly still fire, except instead of the one that destroyed the Baudelaire mansion, it was the blaze at the Duchess of Winnipeg's castle. The children never see either of their parents again, but they do hold out hope for quite some time due to suggestive information in the Snicket File.

Netflix
Outer Banks: A Refresher on Where the Pogues and Kooks End Up in Season 1
by Kelsie Gibson 10 hours ago