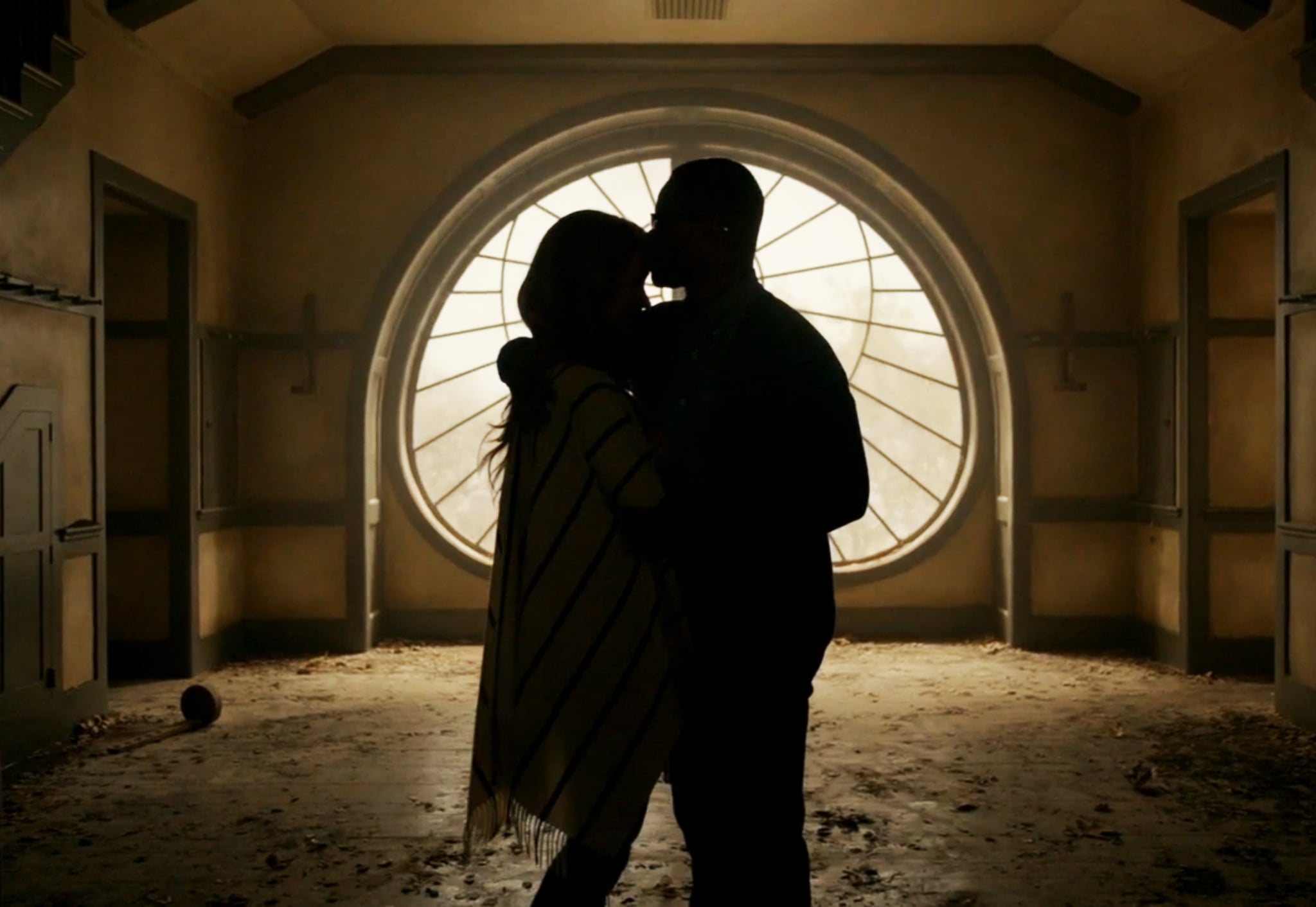 The new season of American Horror Story has finally premiered, but let's just say we didn't really get all the answers we were hoping for. We thought we figured out the theme, but the method of storytelling — where some characters are actors and some aren't — really muddled our minds. Was the theme, indeed, My Roanoke Nightmare? Would it take us all the way back to the Lost Colony of Roanoke, or just focus on this one couple? One thing's for sure, not everything's adding up. And, well, that can only mean one thing: there's a part of the mystery we have yet to figure out. Let's break down the clues.

During the episode, the consistent subtitle used is My Roanoke Nightmare. It's the title used to introduce the premiere, and it precedes or follows commercial breaks throughout the hour. It's even used in the preview of what's to come. And yet, American Horror Story: Roanoke is being used just as often. That's the name of the season on the FX Networks website, and it's the name used in the icon for the show's official Twitter and official Facebook accounts. This suggests that My Roanoke Nightmare is not the full "American Horror Story," as it were. It's just one piece to the puzzle.

It pays to go back and look at old quotes. New information can help diminish their ambiguity. What's more, they can suddenly provide new insight on what's happening in the present. Let's go all the way back to last August, when season six would barely have been in the developmental stage. After all, Hotel hadn't even premiered. Even so, Ryan Murphy was thinking ahead, and he told Entertainment Weekly about an interesting tactic for season six. "We're doing something that we've never done before on the show," Murphy said. "We're doing two different groups of writers rooms. Some of our writers will be bouncing around but a whole different group coming in late August." Granted, many things could have changed in the past year, but what if it had really gone down this way? That would mean My Roanoke Nightmare would go to one set of writers. Therefore, the writers in the other room would have to logically be working on something else.

Still feeling doubtful? Consider how Ryan Murphy doubled down on that claim during the American Horror Story panel during this year's Paleyfest. Murphy again said two ideas were in play: "We've been working on two ideas at once, which we've never done. . . Both things that we're writing right now – we haven't declared a winner – will have a different form, so we're excited about that. We'll talk about it soon, but we haven't landed on it yet." Maybe they never picked a winner after all. Maybe they used both ideas to fold into one larger story.

3. The Show Within the Show

One perplexing thing about the whole "show within a show" model is that it totally takes away any stakes. We know the couple survives their terrible ordeal, because they lived to tell the tale on TV. Furthermore, no one in the story is in any real danger. It's a dramatic reenactment. Everyone, including that indestructible colonial woman and the "Piggy Man" and the ghostly nurses, is technically just a paid actor . . . right?

4. Scattered Hints in Other Teasers

Even if all of the season's teasers are technically "misdirects," save for "Wind Chimes," they still could provide fodder for speculation. For instance, the fact that a great bulk of them reference classic horror movies could mean they're the same kind of production set where, say, My Roanoke Nightmare might be filmed. Another teaser, "Blind Date," features this same "production within a production" model. It seems like a pretty clear callback to classic monster movies of Old Hollywood, even though the scene — a young blond woman getting drowned by a swamp creature — seems so real. It's cautionary: there's more than what you're seeing. You've got to broaden the scope.

Then there's the fact that the show used "misdirects" at all in promoting the season. The teasers always seem to embody the greater themes of the season, right? Misdirection could very well fit into the season as a whole. By that token, we could assume My Roanoke Nightmare is the biggest misdirect yet, and the truth would be revealed in time.

5. The "Perfect Illusion" on the Surface

Then, there's the final teaser, featuring Lady Gaga's new single, "Perfect Illusion." The very caption accompanying the teaser was, "Has it all been a Perfect Illusion? The truth is revealed Wednesday." It was the final teaser, and it left a lingering message with us: be warned. All is perhaps not as it seems. It's unclear what it might be, but there's a good chance part of AHS's sixth season is exactly that: an illusion. It could be that the actors are not actors. It could be that the storytellers are not really the couple. Or it could be that a larger horror story is lurking underneath.

6. The Lack of Title Sequence

Perhaps the most interesting aspect of the premiere was that we didn't get a trademark American Horror Story title sequence. It's the opening credits, where the actors' names materialize among a mélange of frightening and disturbing images. If you consider that My Roanoke Nightmare is merely a show within a show, though, it makes sense. We haven't truly entered the American Horror Story yet. This is, presumably, a very long prologue. If the logic holds, we'll get a full title sequence as soon as the real terror begins.

Phoebe Dynevor
Phoebe Dynevor Not Returning to "Bridgerton" Season 3: "If They Ask Me Back . . . Who Knows?"
by Eden Arielle Gordon 49 minutes ago