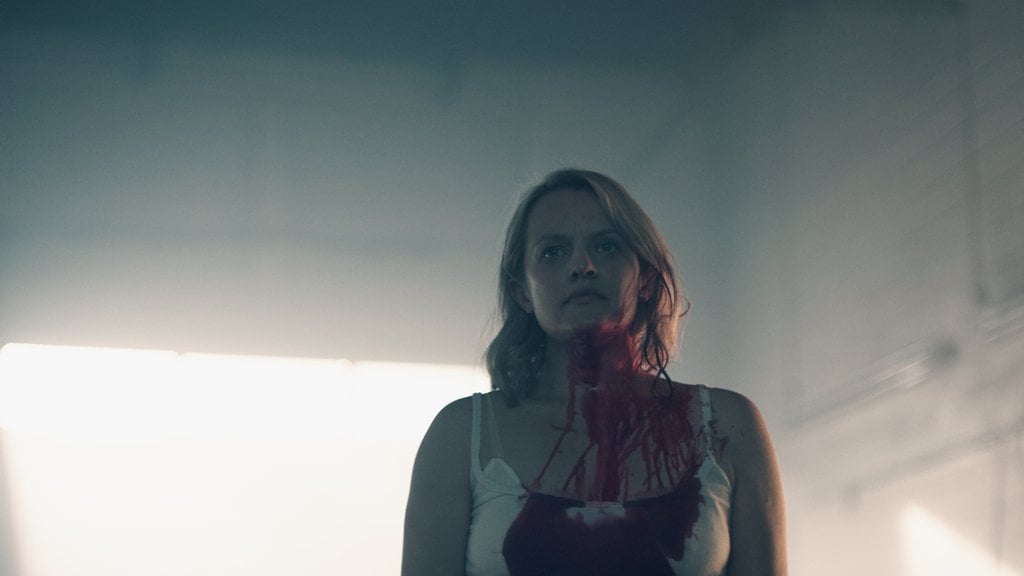 Gruesome spoilers for The Handmaid's Tale below!

Just how bleak is season two of The Handmaid's Tale? Real bleak. The season premiere picks up right where the first season finale ends, with June in the back of the mysterious truck that the Eyes locked her in after they hauled her out of the Waterfords' home. Does she die? Does she live? More importantly, does she escape? Luckily (and unluckily), the experience is just another one of Aunt Lydia's many brutal manipulations designed to break the spirit of Gilead's handmaids. Later on in the episode, however, there's a pretty stomach-churning scene that might have caused some confusion.

To back up a little, June manages to survive Aunt Lydia's ordeal. When she's eventually returned home to the Waterfords, Serena informs her that she has a doctor's appointment for the baby and they head off. June's experience in the exam room is routine (and by "routine," I mean horrifyingly detached, as usual), until she's left alone in the room with a man who's dressed as an Eye. As he leaves, he calls her by her real name, June, as opposed to her handmaid name, Offred, immediately tipping her off that something's up. It doesn't take long for her to find a key hidden in her boot, which leads her down a passage way in the bottom of the building and into a meat truck. In other words, she's free! Well, sort of.

The truck drops her off in an empty warehouse where she's met by Nick. He helps her shed her handmaid clothes and alter her appearance, which involves chopping off her hair and also a big chunk of her ear. Blood gushes all over the place (see the photo above), resulting in another gruesome scene to add to The Handmaid's Tale's growing collection. If you were confused about why June decides to do such a thing, think back to season one.

In an early episode, we see June going through the intake process at the Red Center, where she's not only outfitted with a red dress and white cap, but also with a small red device on her ear. We're never explicitly told what they're for, but it's safe to assume they're in place to track the location of each handmaid. The ear tags weren't in the original book by Margaret Atwood, but they pop a few times after that season one scene, as well as in season two. June might be free of her tracker, but is she free from Gilead for good? For her sake — and our nerves — let's hope.