Warning: Major spoilers for the end of The Handmaid's Tale's first season below!

Season one of Hulu's tense, terrifying adaptation of The Handmaid's Tale, a pitch-perfect ode to Margaret Atwood's 1985 feminist novel of the same name, has officially come to a close. The final episode, "Night," starts out with Offred (Elisabeth Moss) boldly declaring that Gilead "should've never given us uniforms if they didn't want us to be an army," and it doesn't slow down from there. From an uncertain future for June/Offred to satisfying resolutions for some other fan-favorite characters, here are the biggest events that go down in the finale.

Related:
The Handmaid's Tale Shows Us Why We Can't Compromise on Reproductive Rights

There are flashbacks to Offred's time acclimating to her brutal new life as a handmaid in Gilead's Red Center (where women forced into becoming handmaids are indoctrinated with the new regime's ideology) sprinkled throughout season one, and this final glimpse shows the first day she arrived at the facility. Aunt Lydia (Ann Dowd) shocks her with a cattle prod for not apologizing properly ("I'm sorry, Aunt Lydia!") and later painfully outfits Offred's ear with an electronic tracker.

In the penultimate episode of season one, Serena Joy (Yvonne Strahovski) goes into the private study of her husband, Commander Waterford (Joseph Fiennes), where she presumably discovers evidence of Offred's trip to Jezebel's with him. It's confirmed in the finale when she storms into Offred's room in a fury, where she beats her while brandishing the gold dress the Commander gave Offred to wear as proof, repeating that she thought she could trust Offred. Serena then throws Offred into the bathroom and forces her to take a pregnancy test, insinuating that if Offred is not with child, she'll be thrown out or transferred.

It turns out Offred is indeed pregnant, which is likely the result of her nights spent with Nick (Max Minghella), the Commander's driver and an Eye, rather than the Commander himself (a fact Serena can't help but throw in her husband's face afterward). Serena is excited, but Offred is left horrified. "You think I prayed for this?" she asks Serena. "You think I prayed for a baby for this house?" At breakfast soon after, Offred tells Nick, who comforts her at the kitchen table and assures her things will be all right.

Related:
8 Shows to Watch If You're Obsessed With The Handmaid's Tale

Hannah Is Being Raised by Another Family Nearby

Serena announces that she and Offred are going for a drive, and when they arrive at a stately home not far from their own mansion, Serena gets out and goes into the home but keeps Offred locked inside the car with a driver (not Nick) making sure the Handmaid can't escape. Offred stares out the car window, clearly confused, until Serena reemerges from the home with Offred's young daughter, Hannah (Jordana Blake), in tow. Offred immediately loses it, banging against the window and screaming to be let out so she can see the daughter who was literally ripped from her arms months earlier, all while Serena calmly plays with Hannah from a distance. When she gets back in the car, Serena explains the visit wasn't to give Offred a glimpse of Hannah as a reward, but as a threat. "As long as my baby is safe, so is yours," she tells Offred, who curses her out in the backseat in return.

Offred Opens the Package Moira Dropped Off at the Butcher Shop

With the package belonging to the Mayday resistance group safely in her possession, Offred takes a moment to open it and find out what's inside. It's not a bomb (phew), but the contents still rip her apart. Inside is a stack of letters from other Handmaids telling the world of Gilead's atrocities against them and of the children that were taken from them. Following her afternoon with Serena, Offred breaks down while reading them all. Unfortunately we don't find out where Mayday got the letters or what their plans are for them. 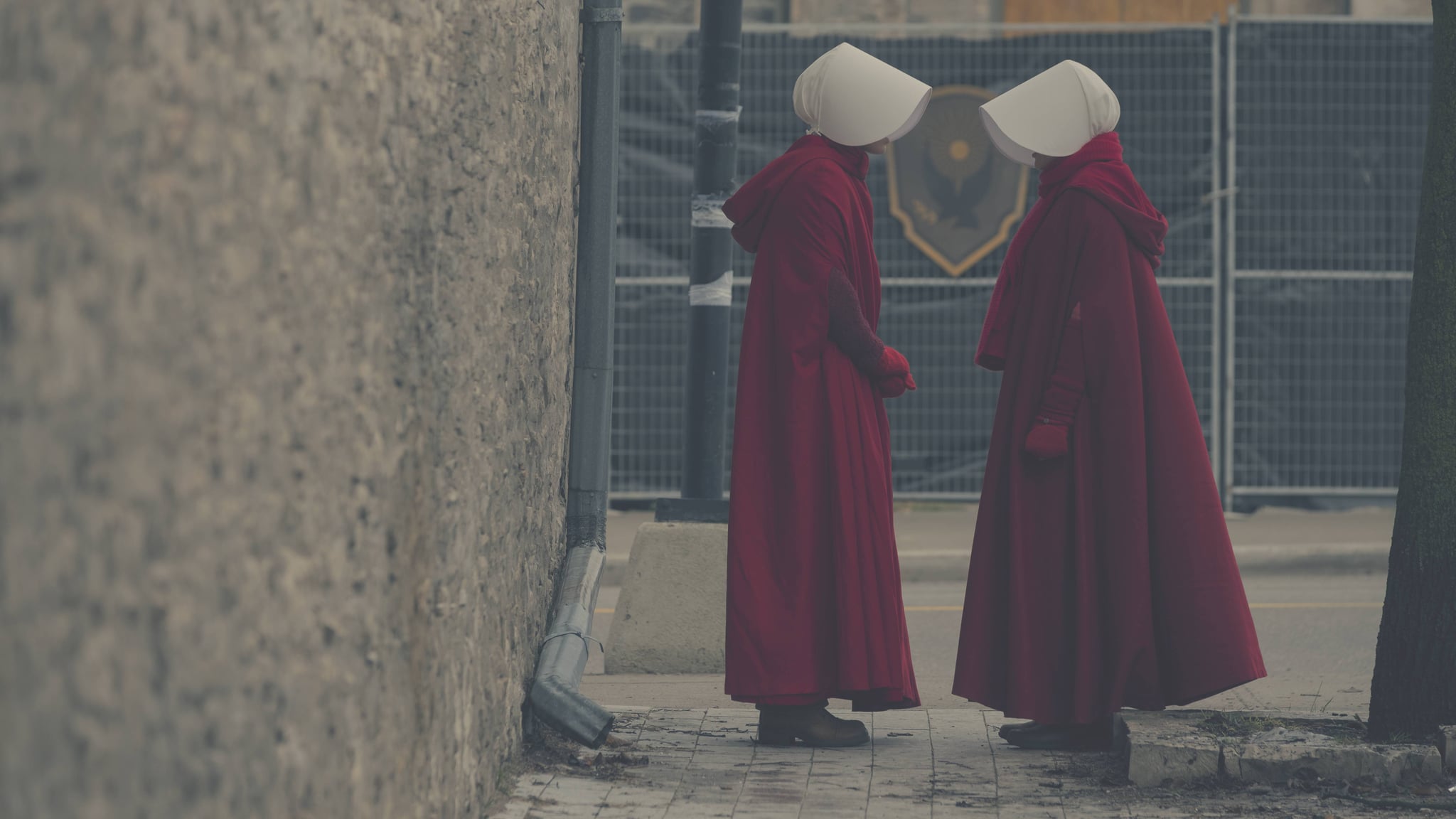 Justice for Moira (Samira Wiley)! The character's story in the book is pretty tragic (she ends up at Jezebel's, where she lives out the rest of her days in misery), but fortunately the TV show blessed us with an alternate ending for Offred's best friend. After escaping Jezebel's and dropping off the Mayday package, Moira drives her stolen SUV as far North as she can toward the Canadian border.

We don't see all of her journey, but she ends up abandoning the car and stumbling through some snowy wilderness before she finally comes across a rural farm. She collapses in a garage on the property, exhausted and terrified, and wipes some dust off of a truck's license plate to reveal a word she's been praying for: Ontario. She made it! Later on in the episode, Moira makes her way to a refugee center that accepts her with open arms. Her case worker supplies her with money, clothes, food, and identification cards. As if that isn't relief enough, she also reunites with Offred's husband, Luke (O-T Fagbenle), who greets her with a tearful embrace.

Commander Putnam Gets a Grisly Punishment

Following the events in episode nine, "The Bridge," Commander Putnam (Stephen Kunken) goes on trial in front of a group of other Commanders for his forbidden sexual relationship with his family's former Handmaid, Janine (Madeline Brewer). Although Waterford defends him, it turns out Putnam's wife actually requested her husband receive "the harshest punishment possible." He doesn't lose his life, but the next (extremely graphic) scene reveals his punishment; while under anesthesia, surgeons remove his left hand, which is likely a reference to the Bible verse Matthew 18:8: "And if your hand or your foot causes you to sin, cut it off and throw it away. It is better for you to enter life crippled or lame than with two hands or two feet to be thrown into the eternal fire."

Offred Pleads With the Commander to Protect Hannah

After her trip with Serena Joy, Offred is left rattled by the threat and fearing for her daughter's safety. She goes to Waterford's study and begs him to protect Hannah from his wife. He doesn't give her an answer exactly ("Mrs. Waterford would never harm a child"), but he does ask whether or not Offred's baby is his. She lies and says "of course," but he doesn't buy it.

The Handmaids are called upon to the same grassy area where Aunt Lydia forces them to kick an accused rapist to death in an earlier episode of season one, only this time she wants the blood of one of their own. It turns out Janine survived her jump from the bridge in episode nine, and now Lydia wants her to pay by getting stoned to death by her fellow Handmaids. They're clearly not down with the idea, and the new Ofglen (Tattiawna Jones) says she refuses, before getting knocked out and dragged away by a guard. Offred, in her most badass moment to date, steps forward and does the same, dropping her stone at her former tormentor's feet before mocking what she was forced to say on her first day at the Red Center: "I'm sorry, Aunt Lydia." The other women follow suit, and they triumphantly walk home together. 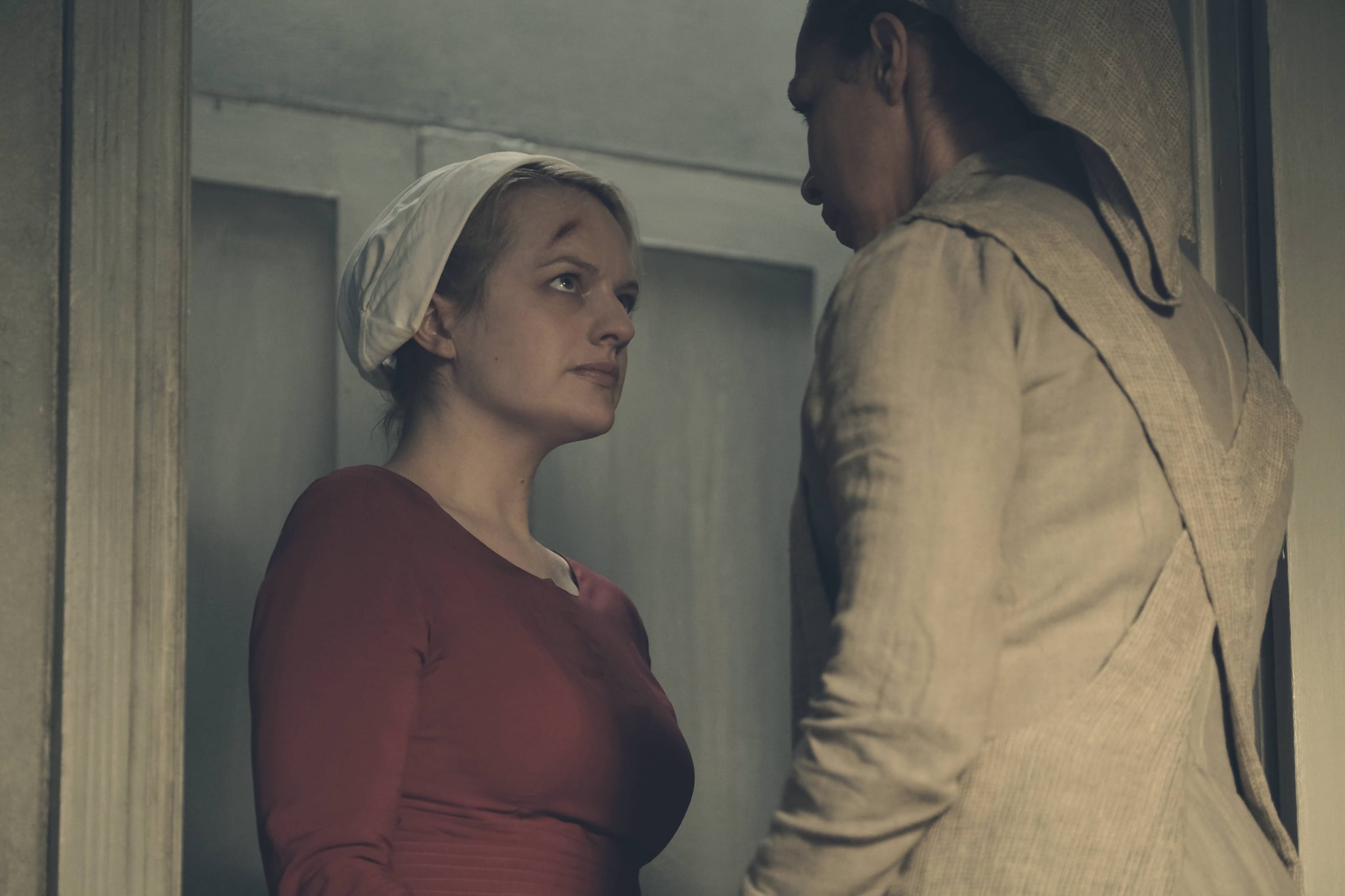 Offred Is Taken Away

If you read the book, then you'll be happy (and probably frustrated) to know that the season one finale ends in pretty much the same way. After returning home from the stoning-that-wasn't, Offred watches one of the Eye's infamous black vans pull up outside the Waterfords' home from the window. Nick comes into her room and whispers, "Just go with them, trust me," before a pair of intimidating men walk up the stairs. She manages to hug Rita goodbye and discreetly tell her about the package of letters, which she's hidden underneath the bathtub (Rita grabs it before anyone else can find it), and the men calmly escort her outside. Not even Serena Joy or Commander Waterford, who both demand to know what's happening since they weren't informed, can stop them from taking Offred away.

As she's loaded into the van, her internal monologue is pulled straight from the last page of Atwood's novel. "Whether this is my end or a new beginning I have no way of knowing," she says. "I have given myself over into the hands of strangers, because it can't be helped. And so I step up, into the darkness within; or else the light." Did Nick arrange for her and their unborn baby to be transported to safety across the border? Or has he been playing her all along and sent her to her death? Like a lot of other things in The Handmaid's Tale, it's left vague. Fortunately season two will be here on April 25.

Carey Mulligan
Carey Mulligan Wore This Hot-Pink Suit on SNL, and It's Malibu Barbie Worthy
by Nikita Charuza 10 hours ago