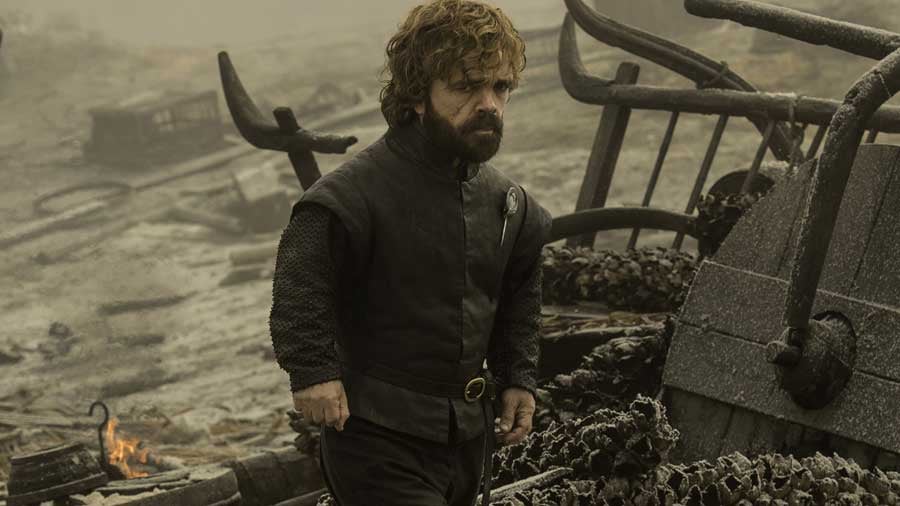 On Game of Thrones season seven, episode five, "Eastwatch," Ser Davos takes Tyrion on a mission to King's Landing to convince Cersei she needs to lay down her arms and come together with Daenerys to fight the coming Night's King and his army of White Walkers. The only problem is the Gold Cloaks have been looking for Tyrion since he left King's Landing in season four because of that pesky little thing he does after Jaime sets him free while awaiting execution for allegedly killing Joffrey:

"Last time I was here, I killed my father with a crossbow," Tyrion says dryly as he and Ser Davos land on a beach near the Red Keep.

Cersei has had the Gold Cloaks out for Tyrion's head ever since, though for her it's more about the fact that she thinks he killed her son Joffrey than the fact that Tyrion killed their father. Cersei liked her father, but she loved her children, and Tyrion loses any shred of affection she might have for him when Joffrey dies, even though it turns out he has nothing to do with it.

Related:
Game of Thrones: Tyrion Didn't Kill Joffrey, So Why Does Jaime Still Hate Him?

So sneaking into King's Landing is a dangerous proposition, but Tyrion manages to parlay with his brother Jaime, who is "the only person [Cersei] listens to," without being detected by the guards. While Tyrion meets with Jaime to appeal to his older brother about the imminent White Walker threat, Davos also manages to sneak into Flea Bottom. It's nearly as dangerous for him to be skulking around King's Landing as it is for Tyrion, because the guards wouldn't mind catching Stannis's former ally, the Onion Knight, either. But Ser Davos also pulls off his own mission without detection, recruiting Gendry, the last of Robert Baratheon's bastards, to come join Jon Snow and help forge dragonglass weapons.

Related:
17 of the Most Satisfying Deaths That Ever Happened on Game of Thrones

As Davos and Gendry prepare to leave King's Landing, they manage to convince two Gold Cloaks that they're merely fishermen and merchants . . . until the guards see Tyrion arrive to join in the escape. They know Cersei "was looking for a dwarf with a scar like that a while back," but before they can turn Tyrion in to their queen for a handsome sum, Gendry bashes both of their heads in with his war hammer, a weapon that is an ode to his father (Robert used his war hammer to kill Prince Rhaegar Targaryen so many years ago).

So Tyrion has once again escaped his family's clutches. Will he be so lucky the next time, when presumably they will all convene as Jon Snow tries to prove the existence of White Walkers? Our money is on Jaime having to choose between his siblings — and we think Jaime is going to end up saving his younger brother at the expense of his pregnant sister-lover.