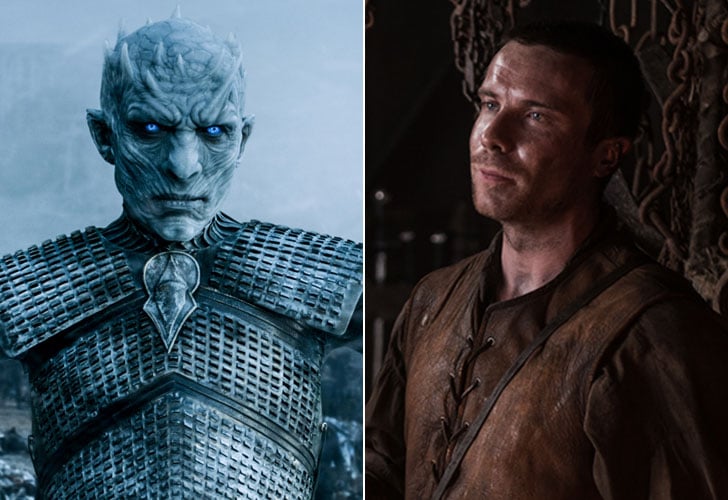 There are a ton of Game of Thrones theories that aren't always believable (looking at you, Catelyn Stark's ghost), but one of the biggest ones coming out of season seven's fifth episode, "Eastwatch," is refreshingly simple. It appears that Gendry (Joe Dempsie), who has returned in all of his glowed-up glory, could be the key to winning the war against the Night King and his army of wights.

Of all the bombshells Sunday night's episode repeatedly drops, Gendry's arrival is one of the most satisfying. While strolling through Flea Bottom, Ser Davos seeks out Robert Baratheon's bastard, who has been making his way as a talented blacksmith ever since rowing away into the night in season three. Davos easily convinces Gendry to return to Dragonstone with him and join Jon Snow's cause, which not only gives us a budding bromance but also provides an answer as to how Jon is going to forge weapons from all of that dragonglass.

Related:
Is It Possible to Kill a Dragon on Game of Thrones? Yes, but It's Not Easy

Jon might be getting the dragonglass out of Dragonstone's caves on his own at the moment, but he's going to need a lot of help to turn it into something useful. Given Gendry's skill in the art of making weapons (did you see that giant hammer?!), it looks like he's the obvious choice to help arm the Northern forces with swords that can actually kill White Walkers. While speaking with The Hollywood Reporter, Dempsie revealed his own hopes for Gendry's role in defeating the Night King.

"Hopefully! You never know. What that would mean is I really need to brush up on my smithing skills," he joked. "You'll notice on the show that any time you ever see me do any of that stuff, I'm either just finishing or I'm just about to whack something when somebody comes in and interrupts me. It's very convenient for me, as a non-blacksmithing actor . . . He's a useful guy. He's been getting himself ready and getting himself in shape for some kind of reckoning. And let's not forget, he does have his father's blood coursing through his veins, and he was a pretty formidable warrior by all accounts. He's a useful guy to have around."

So, is Gendry's help the key to saving Westeros from a repeat of the Long Night? It's a bad idea to ever call things too early on in Game of Thrones, but it's hard to imagine Jon wouldn't take advantage of Gendry's skills as a blacksmith. Here's hoping the two of them survive their mission to capture a wight in episode six (which looks terrifying), because if they don't, we're in for a very chilly season finale.

Saturday Night Live
Bowen Yang Is, Once Again, the Highlight of SNL as He Embodies the Titanic-Sinking Iceberg
by Karenna Meredith 5 hours ago