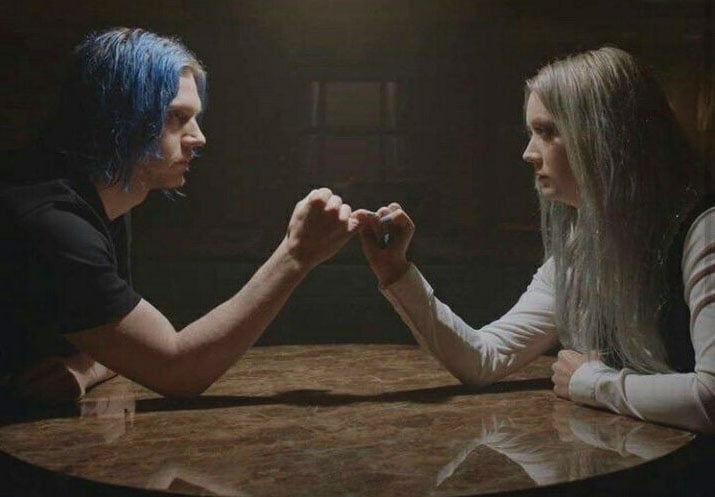 American Horror Story's seventh season, Cult, revolves around the charismatic, blue-haired Kai Anderson (Evan Peters) and his dangerously loyal, bloodthirsty group of acolytes. We've known from the start that their masked reign of terror on the town, and specifically on the phobia-prone Ally Mayfair-Richards (Sarah Paulson), was going to reach a boiling point eventually. After five episodes, it seems like it's finally getting close.

In episode five, "Holes," Kai and the rest of his killer clowns embark on a mission to kill local newscaster Bob (Dermot Mulroney) and then his gimp, whom they find hanging from hooks upstairs. Although they kill both men, a few members of the cult seem shaken up over it: Ivy (who immediately rips off her elephant mask to puke in the bathroom), seemingly innocent cameraman R.J., and Winter (who leaves her brother to calm down Ivy in the bathroom). Because R.J. shows hesitation to kill Bob and the gimp, Kai later ties him to a chair and has the rest of the cult members shoot him in the head with a nail gun until he dies. This appears to leave Ivy and Winter even more disillusioned with the cult's mission.

While we don't think Ivy has the backbone to put an end to Kai's murderous streak, we do think Winter has the potential. As Kai's sister, she knows him on a level that no one else does. Yes, that probably makes her more unwilling to hurt him, but it could also be the catalyst for her choice to try to stop him for good or maybe take over the cult herself. Redditor Cupcakeann pointed out that we have "yet to see what Winter is really capable of" and that she likely "has more tricks up her sleeve." Not only has she been underestimated by Kai thus far but also by their oldest brother, Dr. Rudy Vincent (Cheyenne Jackson).

At one point, Dr. Vincent describes her as a selfish, spoiled brat who wouldn't even care their parents died. But what if Winter is playing the long game? The Reddit theory further posits that she's like a "champion runner, staying in second place for most of the race, just to blow past the person in first in the final seconds of the race." Dr. Vincent's assertion that Winter is vapid and shallow might have been enough to convince her to eliminate him and Kai so that she can take all the power of the cult for herself.

Still not buying it? Check out the theory in full:

Winter is coming from AmericanHorrorStory