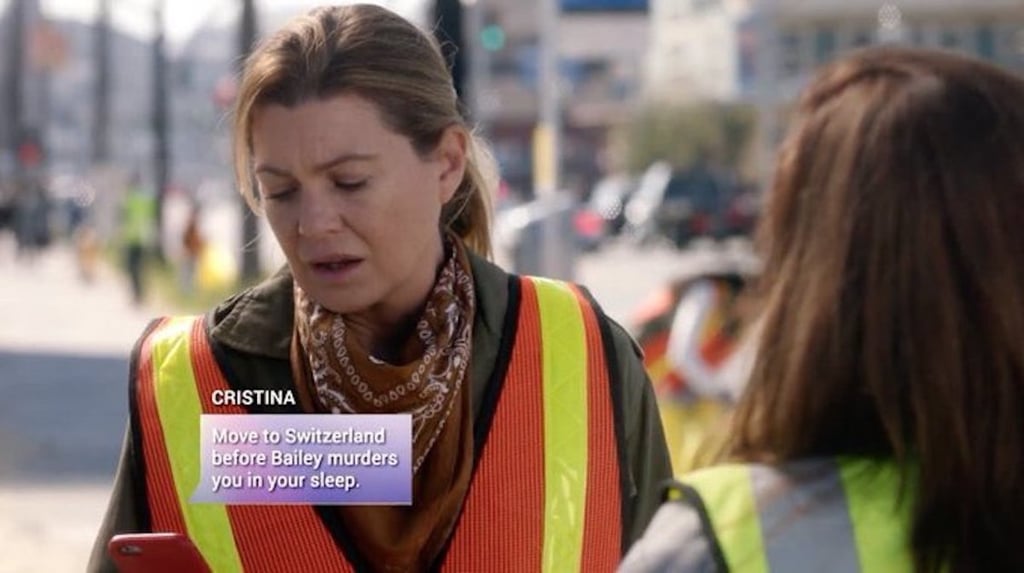 It's been four score and several years since Sandra Oh's Cristina Yang graced the hallowed halls of Grey Sloan Memorial, but during the Oct. 17 episode of Grey's Anatomy, the character reminds fans of her presence with a cheeky offscreen cameo.

As a reminder, Cristina leaves Grey Sloan Memorial in season 10 when she moves away from Seattle to lead a cardio-thoracic department at a hospital in Switzerland — but that doesn't mean she isn't still in the know when it comes to the hospital's drama. In Thursday's episode, Meredith suffers from an intense case of foot-in-mouth disease (not the actual disease, mind you) when she accidentally publishes a list of problems she has with the medical field and, more specifically, with Grey Sloan Memorial Hospital. Since Meredith is already on superthin ice after committing insurance fraud, defiantly refusing to apologize for her actions, and attempting to practice medicine while her medical license is under review, it's definitely not a smart idea to disrespect her former place of work where her mentor Miranda Bailey (Chandra Wilson) is still the chief.

When Meredith's list goes live, all hell breaks loose, and it's the perfect time for her "person" to step in and make sure she's OK. The disgraced doctor receives a text message from her friend that simply reads, "Move to Switzerland before Bailey murders you in your sleep." It's short, and it's a spot-on prediction of the magnitude of Miranda's anger. When Meredith seeks out her former mentor, the older woman is rightfully hurt by Meredith's list and exasperated with her bullsh*t. "I was your friend, your mentor, and every time you needed me, I was there," Bailey tells her, refusing to accept Meredith's apologies.

The episode ends without any reconciliation, and it doesn't seem like there will be a solution to the rift between Miranda and Meredith anytime soon. Maybe Cristina has a point? At least that way the fans can get a proper appearance from their favorite! Still, any mention of Cristina is enough to send Grey's Anatomy viewers into a tizzy. Check out their reactions ahead!