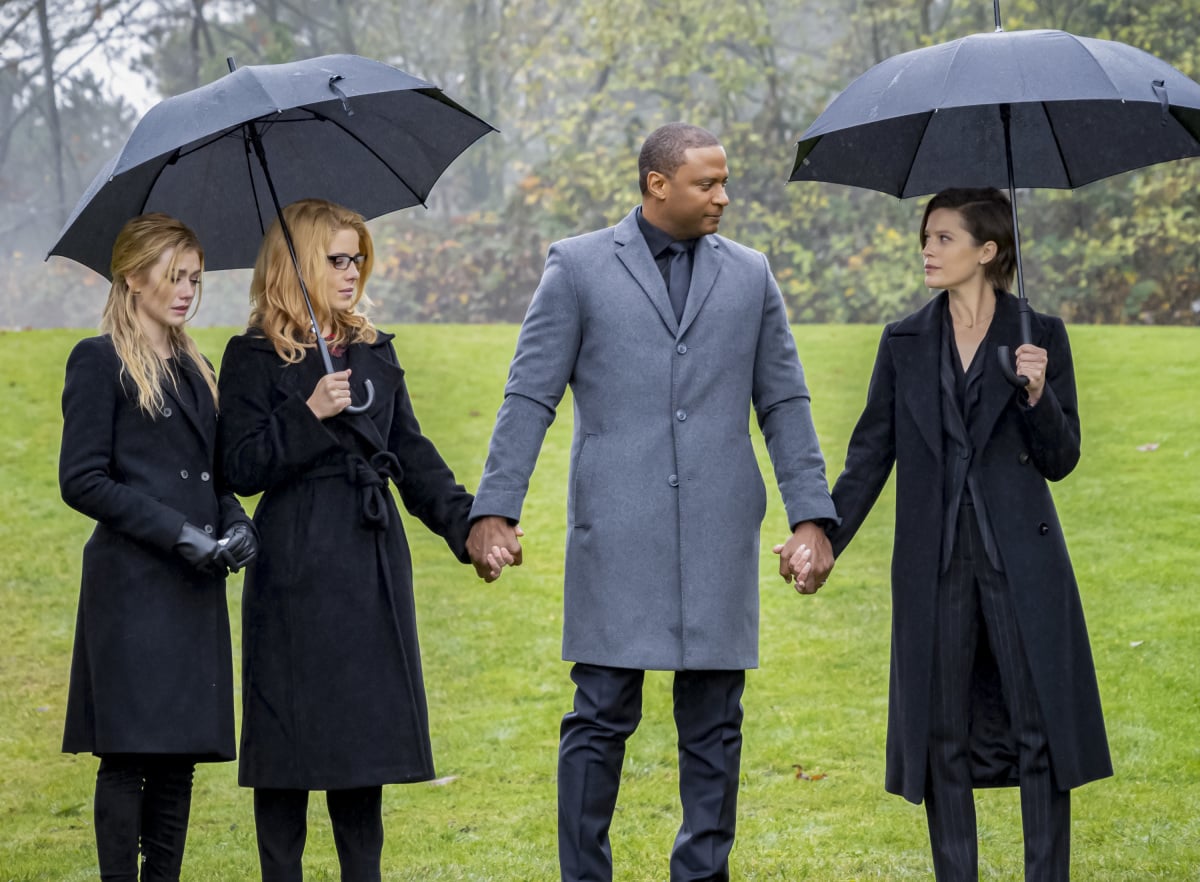 It's official: The CW's Arrow has ended after eight seasons of crime-fighting. On Jan. 28, the series finale premiered and tied up various loose ends following the death of Oliver Queen (Stephen Amell) in the Crisis on Infinite Earths crossover event. It shows how Oliver's sacrifice brought back loved ones who initially died throughout the course of Arrow, including Oliver's mom, Moira (Susanna Thompson), and his best friend, Tommy Merlyn (Colin Donnell). We also get a tear-jerking appearance from Felicity (Emily Bett Rickards), who returns to attend Oliver's funeral and see her grown-up daughter from the future.

But there's one particular scene that has fans very excited. John Diggle (David Ramsey), who is preparing to move to Metropolis with wife Lyla (Audrey Marie Anderson), is sent flying into the air when a meteor-like object crashes in front of his house. He approaches the rubble only to find a small box, and when he opens it, a glowing green light illuminates his face. Yes, my fellow comic book fans, this is the major Green Lantern allusion we've all been waiting for.

Arrow has teased Diggle becoming the Green Lantern here and there. In 2018's Arrowverse crossover, John Wesley Shipp's version of the Flash reveals that on Earth-90, Diggle usually sports a special accessory. "Hello, John. You're not wearing your ring . . . Things must be different here," he says. That was the most overt reference to John's destiny of becoming the Emerald Knight — until the series finale, of course.

We never get to see what's inside the gleaming box, and it's left up to the viewers how exactly to decipher what it means for Diggle's future. But it's hard to deny that it offers the perfect setup for the Green Lantern series currently in the works at HBO Max. And since Arrow producer Greg Berlanti is spearheading the upcoming anthology, we might get to see the Diggle we know and love cross networks.

So far, Ramsey and the Arrow creative team have remained hush-hush about who will don the green ensemble in the new series. But in an interview with TVLine, Ramsey expressed his excitement over the project, whether he ends up being cast as the Green Lantern or not. "I've talked to Greg about it, and they have a great plan," he said. "It sounds fantastic. People are champing at the bit to see this universe, to see this military corp come to live-action, and I'm among the people who are so excited. It's great for for television . . . People are going to be really stoked about this show." It sure sounds like he'd be on board with assuming the lead role, but we'll just have to wait and see. For now, a little radiating box will suffice, especially since Ramsey already gave us nearly eight years of being one of Star City's best heroes.