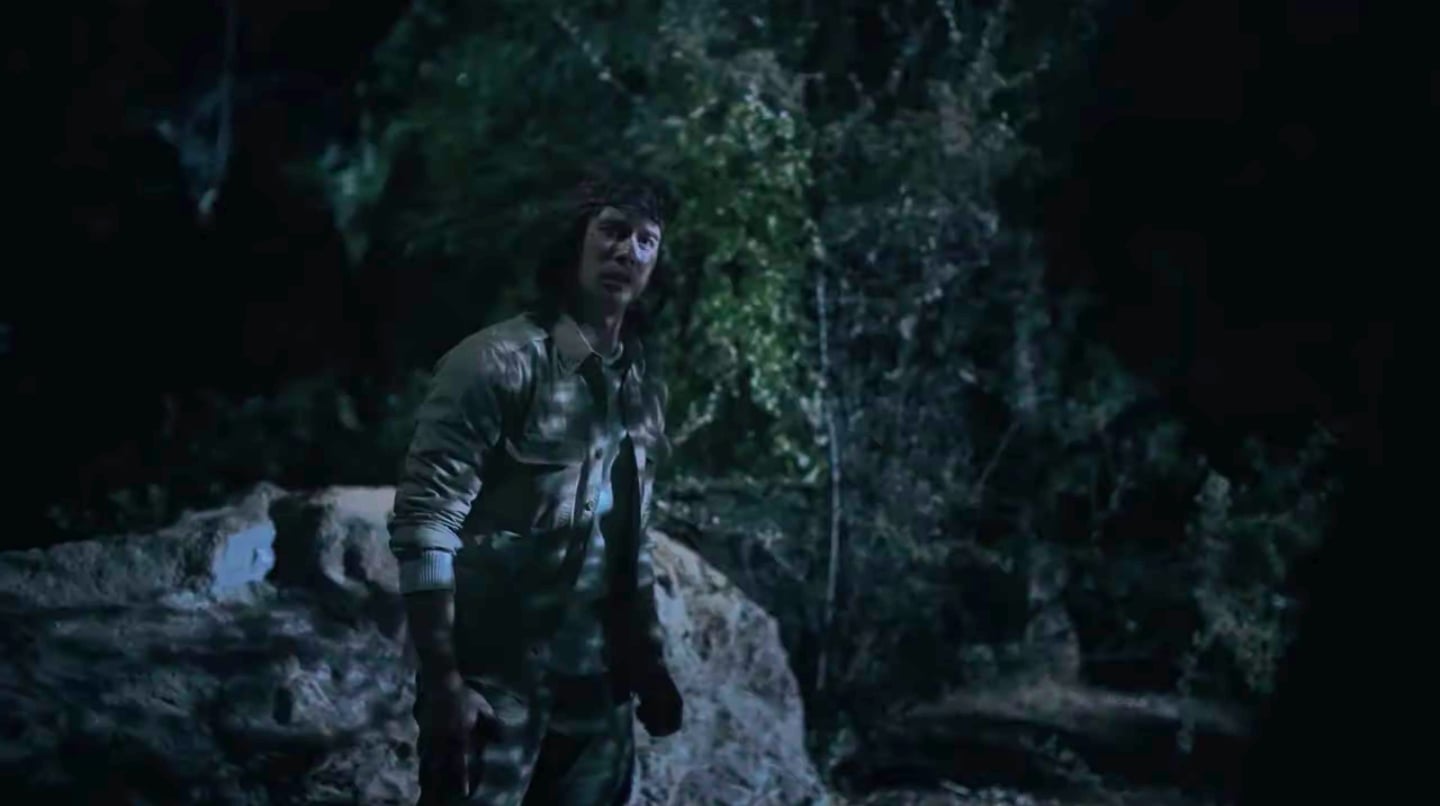 Just when we thought American Horror Story: 1984 was becoming merely a gorefest with a lot of camp and witty callbacks to classic films, we meet Jonas. Before we knew his name, Jonas (Lou Taylor Pucci) was simply known as the mysterious hiker that the LA crew hit as he was wandering out the woods surrounding Camp Redwood. Sadly, we don't get much out of him, because Mr. Jingles kills him and leaves him hanging on the back of a door for Brooke to discover. That is, until we see him pop up again in episode two, just in time to get murked by Richard, the Night Stalker . . . twice!

Richard is just as shocked as viewers were when he has to kill his victim a second time — usually people don't just shake off being gutted. The hiker looks confused at Richard's presence and tells him, "You're not supposed to be here." And even more alarming, he cries out, "Wait, I don't die here!"

He's obviously wrong, because Richard stabs him again, but it's also just a really weird thing to say. Curiosity piqued, Richard takes the man's discarded badge and learns he's a former Redwood camp counselor named Jonas Shevoore who worked there in 1970. Yes, that's right: Jonas was a camp counselor when Mr. Jingles allegedly massacred a cabin of counselors. As Margaret confirms for Richard, he's definitely dead. But since he's obviously having a problem staying dead, that means that Jonas is, in fact, a very confused ghost. And with that, 1984 officially passes the threshold into AHS's brand of spooky, weird sh*t. 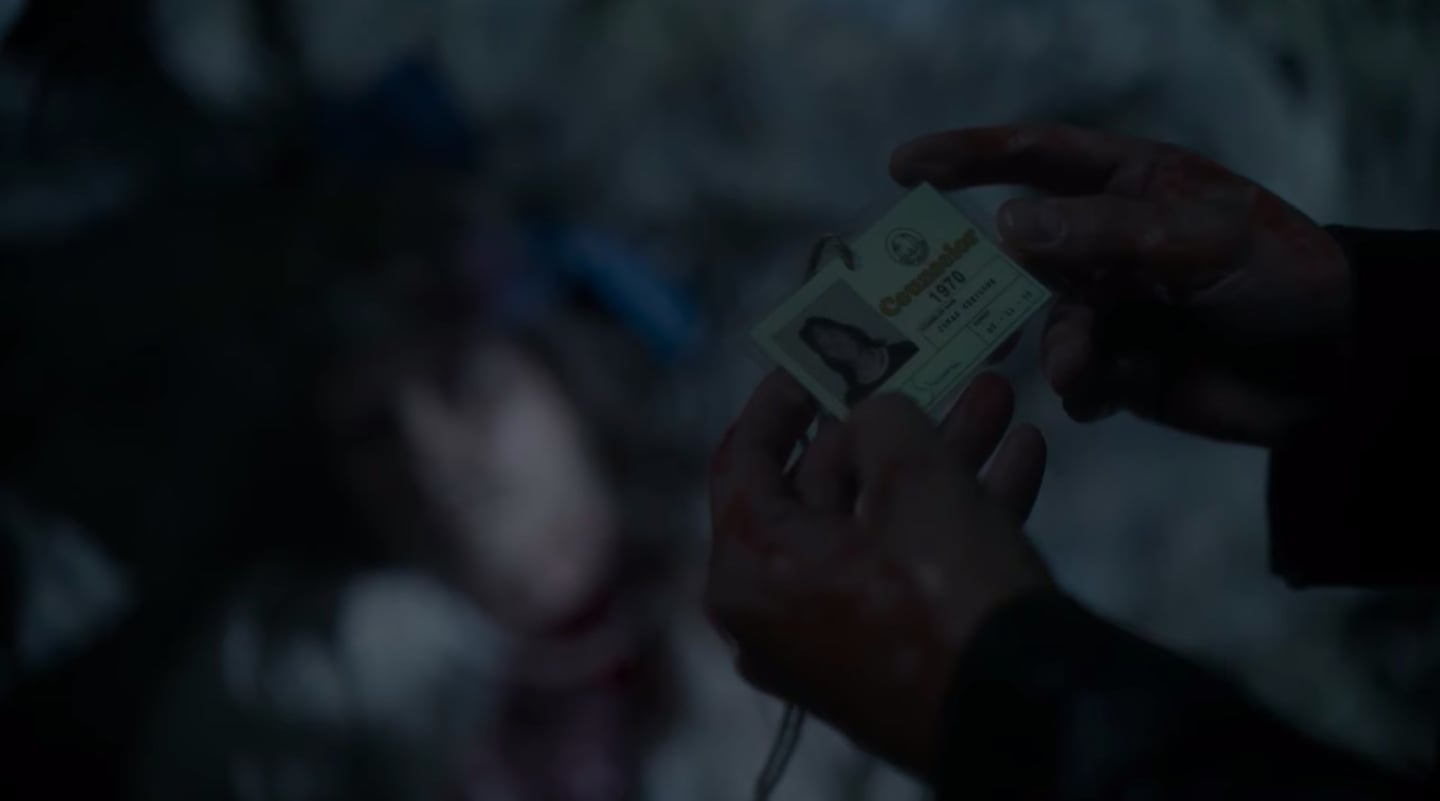 The reveal that Jonas is a ghost from 1970 juices up the story for one huge reason: we now have another witness to the counselor massacre that has raised a few questions. When Richard goes to Margaret to discover the secrets behind the hiker's mysterious immortality, he clues the camp owner into his existence. Richard goes off to deal with Mr. Jingles at Margaret's behest (which is a Michael vs. Jason-esque showdown that I would love to see), while Margaret looks for Jonas. When the two are reunited, the ghost reveals that he remembers seeing the other camp counselor drenched in blood inside the cabin, but bearing no wounds. He tells her that he ran away toward civilization, but was hit by Mr. Jingles's car and died.

But as Margaret pushes Jonas into telling her what he saw, we get a flash of the scene he came upon back in 1970. It's notably different from the one Margaret painted for the crew in episode one; Jonas remembers seeing Margaret standing among all the bodies of Mr. Jingles's victims and soaked with blood. She's even got a bit of a smile on her face as she stares into the distance. But in Margaret's recollection, she had been among the bodies on the floor, pretending to be dead, and most importantly, missing an ear. Why would she have gotten up when Jonas could have easily been Mr. Jingles coming back to finish her off?

Related:
That Attack on American Horror Story Was Inspired by a Real Night Stalker Encounter

It doesn't help that when Margaret hears Jonas tell his version of the story, she only asks, "So Jingles was in the truck?" You reunite with a coworker you thought was dead and that's what you ask him? It almost sounds as if she was checking up on an alibi or a loose end, doesn't it?

Jonas may be a ghost, and thus unable to be killed, but damn if we aren't a little worried about him being in the clutches of Ms. Margaret Booth right now.