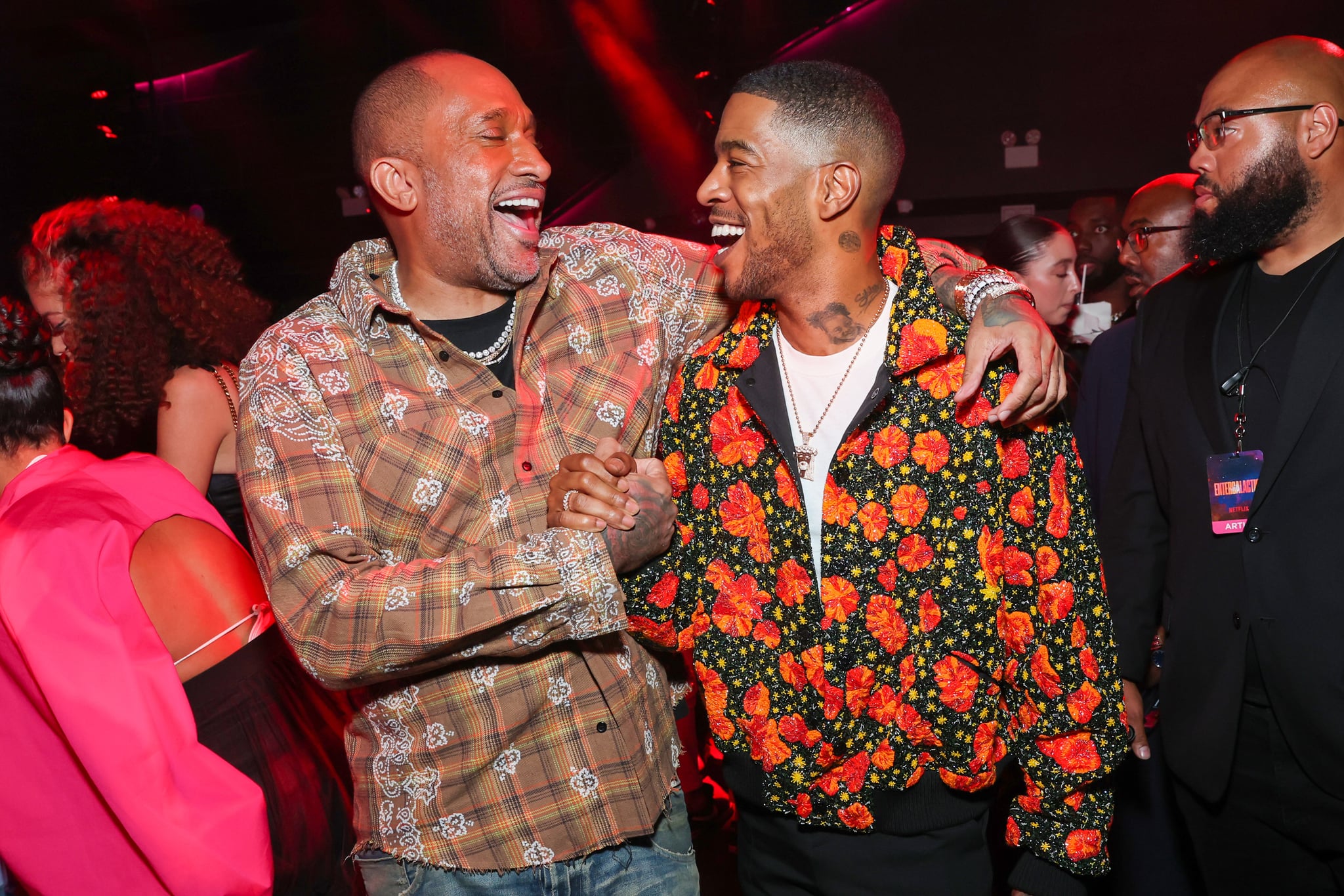 Scott "Kid Cudi" Mescudi and Kenya Barris are changing the world of animation with their new Netflix series.

Unlike any animated special you've ever seen before, "Entergalatic" brings Mescudi's eighth studio album of the same name to life with an imaginative musical love story — which follows neighbors-turned-lovers Jabari (Mescudi) and Meadow (Jessica Williams) as they navigate the twists and turns of their budding romance in New York City. It features an A-list lineup of animated famous faces, including Timothée Chalamet, Vanessa Hudgens, Teyana Taylor, Jaden Smith, and Ty Dolla $ign, as well as songs from Mescudi's album, all of which he recorded before enlisting the help of his cocreator, Barris, to mold his latest vision.

"Scott did me an amazing favor for my daughter that was just so sweet and who Scott is."

Barris tells POPSUGAR that his joint venture with Mescudi began with an act of good faith from the "Day 'n' Nite" rapper. "Scott did me an amazing favor for my daughter that was just so sweet and who Scott is," he says. "With [no strings attached], he came and spoke to my daughter's Black Student Union. She never asks me for anything, and she was like, 'Can you ask Scott [to come speak]?' So he came, and those meetings usually have 15 people in them — [that one] had 1,500. Just watching it, it hit me like, I was familiar with Scott's music, but not with the effect on the youth that he has."

Related:
Kid Cudi May "Take a Step Back" From Music to Focus on Screen Projects

"People think he's 20 years old, but he just keeps reinventing himself, and and he's so specific and in his own lane."

Barris says the years-long process it took to make "Entergalactic" made him admire his "cutting-edge" collaborator even more. "He's become my brother," the "Black-ish" creator shares. "We're working on other things together, and I've learned so much . . . Scott's a perfectionist. He listens to things, he hears things, and he talks about how to make things full . . . People think he's 20 years old, but he just keeps reinventing himself, and he's so specific and in his own lane. And I've learned a lot from that, too. You stay in your lane and figure that out, and it becomes ageless because that becomes what you do."

Compared to his previous albums, Mescudi took an entirely different approach with his dual "Entergalactic" project. The rapper initially envisioned his new album as an anthology of some sort set in a different universe until Barris convinced him to turn it into an animated special. From there, the inspiration behind the lover boy music in "Entergalactic" set the tone for what would soon become Mescudi's ambitious take on a visual album.

Williams shares that she was "really excited" to work with Mescudi on "Entergalactic." Already a fan of his music, the actor says signing on for the project was a "no-brainer." "This is the first long-term animated project that I've done, so it took like 1,000 years to make it," she jokes. ". . . We were all in separate rooms at different times — [Cudi] was in New Zealand, I was in London. But it was really exciting because nothing was really made when I first started recording Meadow, and I think she just developed over time."

"Entergalactic" pulls viewers in with its stylized animation that literally brings its cast to life, but the infectious music is the real main event. According to Barris, the television special has enough layers to it that viewers will need to watch it at least "five or six times" because there are "hidden Easter eggs," "songs," and other "things that you might see differently." He adds, "Just like you go to the museum and you'll look at a piece of art and the first time you walk by it you see something different, that's what we want this to be."

"Entergalactic" is now streaming on Netflix.