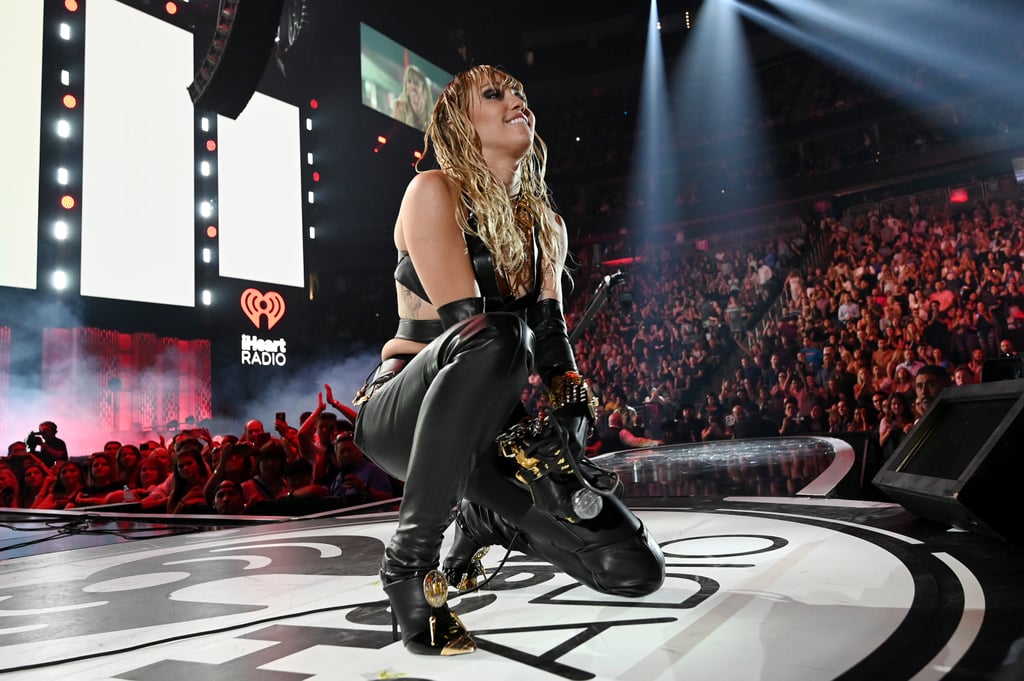 Miley Cyrus isn't letting a breakup stop her from rocking out! At Saturday's iHeartRadio Music Festival in Las Vegas, the 26-year-old singer delivered a power-packed performance that included the live debut of her single "Don't Call Me Angel." Although the track's other vocalists, Ariana Grande and Lana Del Rey, weren't able to join, Miley boldly commanded the stage. Clad in a black leather ensemble, she also sang her songs "Nothing Breaks Like a Heart" and "Slide Away." She then switched things up, paying homage to classic rock hits, such as Pink Floyd's "Comfortably Numb" and Led Zeppelin's "Black Dog."

Backstage, Miley even snapped a few pictures with legendary rock band Def Leppard, who also performed at the festival. "Stoked to have shared the same stage with the legends themselves!" she captioned a clip of her enjoying their set. "We talked about doing some shows together! F*ck yes! Let's do it!"

Miley's high-energy concert comes shortly after news of her and Kaitlynn Carter's breakup made headlines. The two first developed a romance in August, following their respective splits from husbands Liam Hemsworth and Brody Jenner. But in September, they amicably ended their relationship. "They're still friends," a source told People. "They've been friends forever and were there for each other when they were both getting separated, but they're just not in a romantic relationship anymore." Keep scrolling to see more photos and videos from Miley's iHeartRadio appearance!

Olivia Rodrigo
"Drivers License" Is Spotify's Most-Streamed Song of 2021, and, Uh, Everybody Doing OK?
by Kelsey Garcia 1 hour ago

Shawn Mendes
Shawn Mendes Teases a New Breakup Ballad, and We're Wondering If It's About Camila Cabello
by Monica Sisavat 15 hours ago

Billie Eilish
Is This a Holiday Tradition? Billie Eilish Does the Same Vanity Fair Interview For the Fifth Year in a Row
by Naledi Ushe 17 hours ago

Cardi B
Cardi B Celebrates Reaching Diamond Status Yet Again: "Diamonds Are a Girl's Best Friend"
by Njera Perkins 17 hours ago