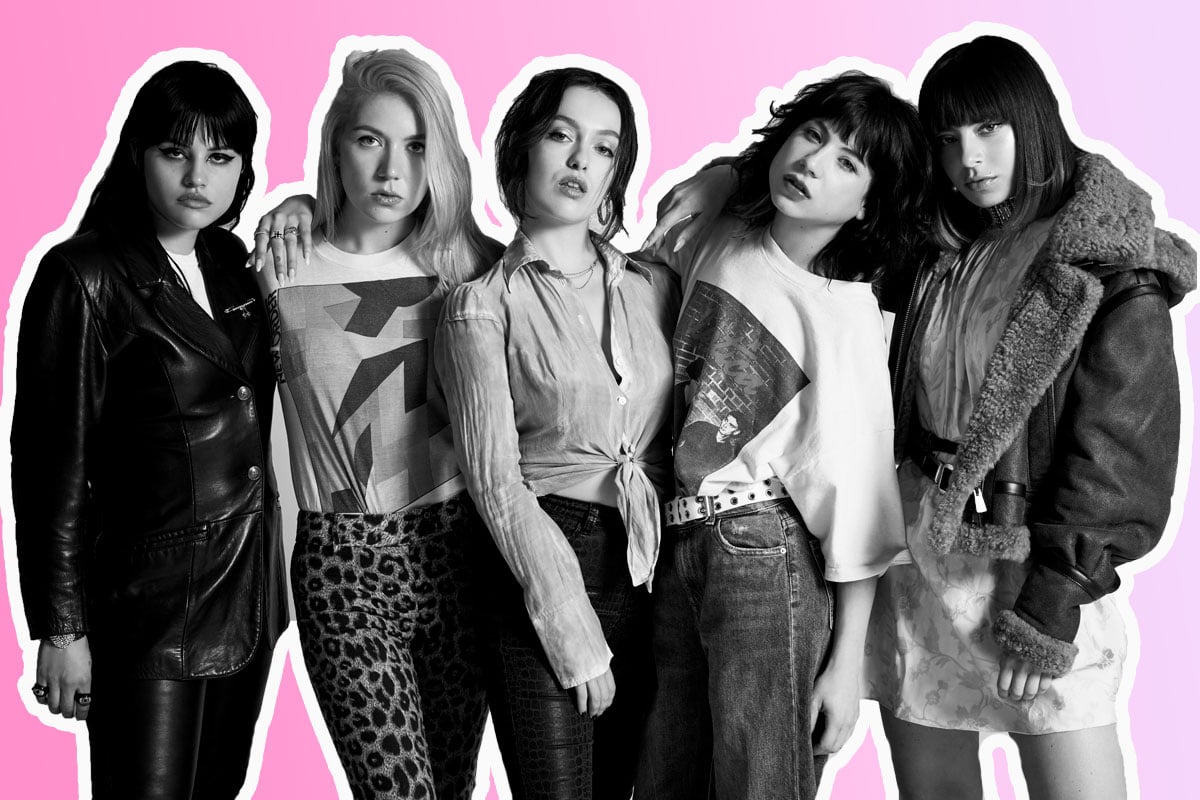 One part Real World, one part Making the Band, Netflix's new reality series documenting the exciting rise of all-female rock 'n roll band Nasty Cherry — aptly titled I'm With the Band: Nasty Cherry, which begins streaming on Nov. 15 — is an unflinching glimpse into the ambition, drama, personality clashes, and most importantly, magic, that goes hand in hand with trying to make it in the music industry.

The six-episode show is worth a watch, to be sure, but what's key is just how much Nasty Cherry's music is worth a listen. The four-piece outfit — which consists of lead singer Gabbriette Bechtel, guitarist Chloe Chaidez, bassist Georgia Somary, and drummer Debbie Knox-Hewson — clearly has talent, which is evident in the four songs the band has released so far. That's a part of what makes the Netflix series so compelling — you want them to succeed almost as much as they do. Luckily, they have an ace in their pocket: Charli XCX.

The British pop star is essentially the brains and the heart behind the whole operation, having handpicked each of the members of Nasty Cherry as well as the band's resourceful manager, Emmie Lichtenberg, a close personal friend of hers. Ahead of I'm With the Band's premiere, Bechtel and Knox-Hewson shed a little light on what the entire process has been like for them, especially having a megasuccessful pop sensation supporting them.

"[Charli XCX's involvement] is so invaluable because she's had this stage of her career before, and she can look at things and remember what she wishes were done a bit different," Knox-Hewson, who met Charli playing drums in her band, tells me over the phone. "We can very easily call her and she'll say, 'This is really important that this decision comes from you.' Or, 'You don't want to regret the kind of music you put out here. Make sure you loved it.' She's just got so much experience. It's like a wealth of knowledge , but it's also really supporting us and trusting us to work things out ourselves."

Bechtel agrees, saying that Charli's support was "all you could ever ask for going into something as daunting as we were, having to get together in such a short period of time and sort out how we felt about everything, and then come together and be one voice."

And that transition isn't easy, as I'm With the Band shows over the course of the season. Being in such close quarters, tensions and misunderstandings run rampant, including a potentially disastrous falling out. But in the end, they all find their way back to each other.

"We watched it on the edge of our seats, sitting on our hands, screaming and crying," Knox-Hewson explains of seeing themselves onscreen for the first time. "It really shows how female friendships aren't always very simple. In normal life, you can have an argument with someone and say, 'I'm just going to let this cool off,' or you even just think, 'I'm not even going to bother explaining why that has upset me because you're my mate that I see once a week, whatever.' Whereas we went straight into this intense sisterhood where you really do talk about why something's upset you or how you're feeling."

For Bechtel, the idea of both joining a band and allowing Netflix to record her every waking moment for a few months was especially daunting. She'd modeled before, sure, but this was her first gig singing lead.

"One thing I've been thinking a lot about recently, because the show's coming up and I've just been reflecting on the entire thing, is that I'm really happy I put myself in a bit of an uncomfortable position for myself," she says. "I know everyone else did as well, just going into the unknown and exploring that fear and every possible chance that could have happened. So, I mean, my thing is kind of just say yes to everything as long as you're not hurting yourself creatively that way. You know?"

Nasty Cherry has dropped four songs so far, most notably "Win," the catchy single that we see the development of in the show. If you haven't listened yet, their sound could be described as the edgier, moodier younger sister of Haim, with a dash of The Donnas thrown in. And, of course, Charli XCX's fingerprints are all over it. But don't get me wrong — in the end, Nasty Cherry carves out a niche all their own, which we'll get a better taste of when the band's EP comes out on Nov. 22. In the meantime, they're hoping they can inspire a few more young women to follow in their footsteps.

"This is such a cliché, but you can really do whatever you want if you believe in it. Gabs hadn't really sang much, I hadn't written music with people before," says Knox-Hewson. "Georgia picked up a bass for this project. Chloe had never played guitar in a band. We definitely had the luxury of having this superstar, pop star going 'I believe in you, so give it a go.' But I think even if you don't have Charli XCX in your phone book, still probably just f*cking start a band, and give it a go. You might surprise yourself."