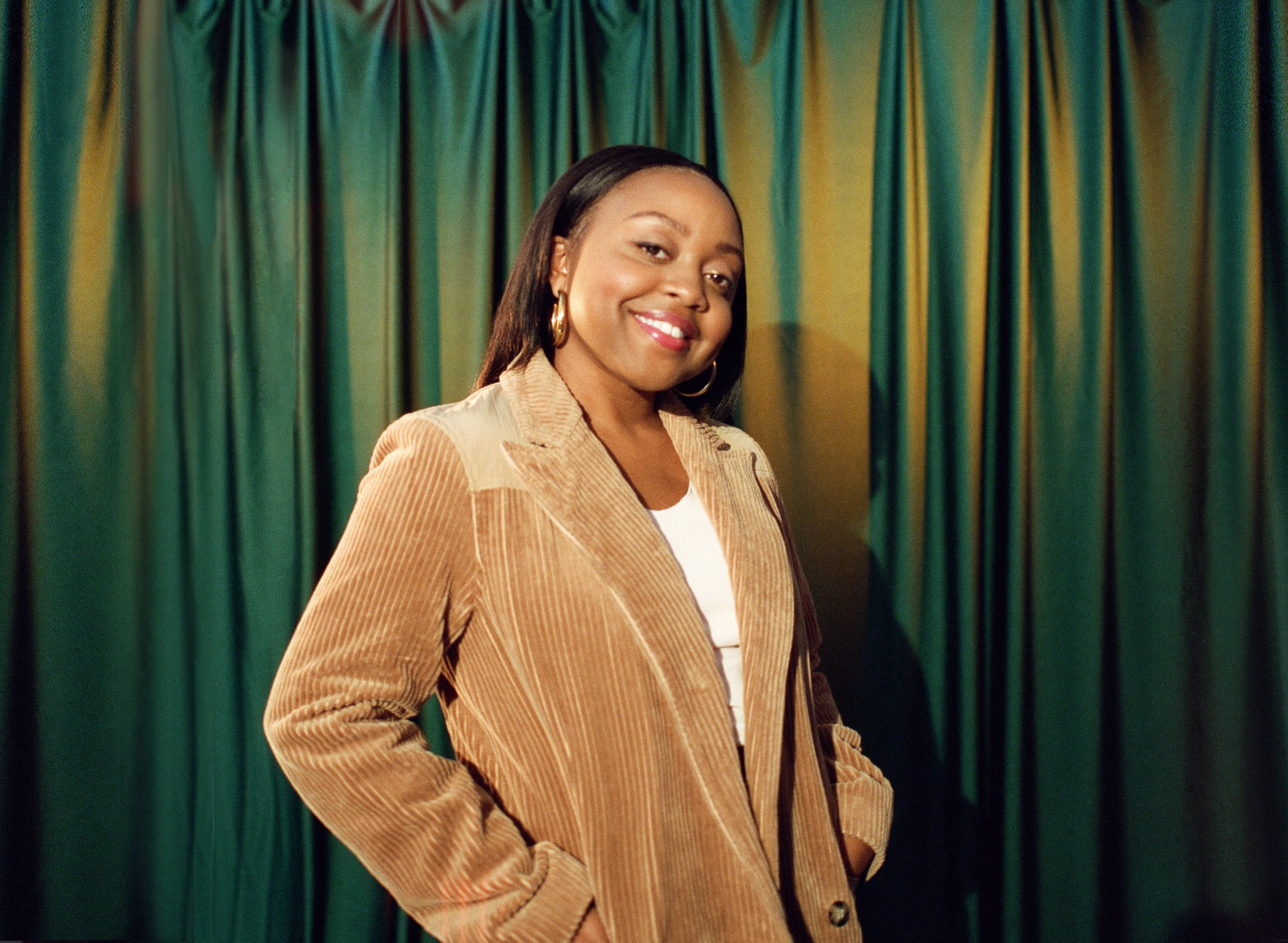 Before Quinta Brunson became an internet sensation, she was a young woman from West Philadelphia plotting her ambitious future in comedy and television. Now, the multihyphenate creator has found a remarkable way to merge the two passions together.

"I put a lot of my mom's real-life experiences into this show and modified them a little bit."

"Abbott Elementary," a popular brainchild of Brunson's, is the culmination of her experiences within the Philadelphia public school system. The new ABC series brings the stories of its eccentric characters to life with mockumentary-style workplace comedy. Named after one of Brunson's favorite teachers growing up, the show is largely inspired by Brunson's mother — who was an elementary school teacher for 40 years — and uses some of her firsthand accounts to highlight the challenges teachers face in public schools. "I put a lot of my mom's real-life experiences into this show and modified them a little bit," Brunson tells POPSUGAR exclusively. "I think a lot of it is based on what I've seen in my mom's years of teaching, and then we incorporated a lot of the more modern stuff."

"Abbott Elementary" stars Brunson, Tyler James Williams, Janelle James, Sheryl Lee Ralph, Lisa Ann Walter, Chris Perfetti, and William Stanford Davis. The series, which has only aired four episodes to date, has quickly become one of the most talked-about shows of the year, trending week to week on Twitter and holding a perfect rating on Rotten Tomatoes.

The charm of "Abbott Elementary" is hands-down its masterful adoption of the mockumentary format, which many viewers fell in love with thanks to "The Office." Fans haven't been shy about comparing Brunson's show to the Emmy-winning staple, either; the most common synopsis that Brunson has seen so far of "Abbott Elementary" is viewers saying, "Oh my god, this is like 'The Office' but with Black people." From the ridiculously humorous Principal Ava Coleman (played by James), who resembles Steve Carell's Michael Scott, to the slow-burn workplace romance brewing between Janine Teagues (Brunson) and Gregory Eddie (Williams) that almost exactly replicates Jim and Pam's, "Abbott Elementary" has clear traces of its predecessor in its DNA. And Brunson welcomes the comparisons with open arms. 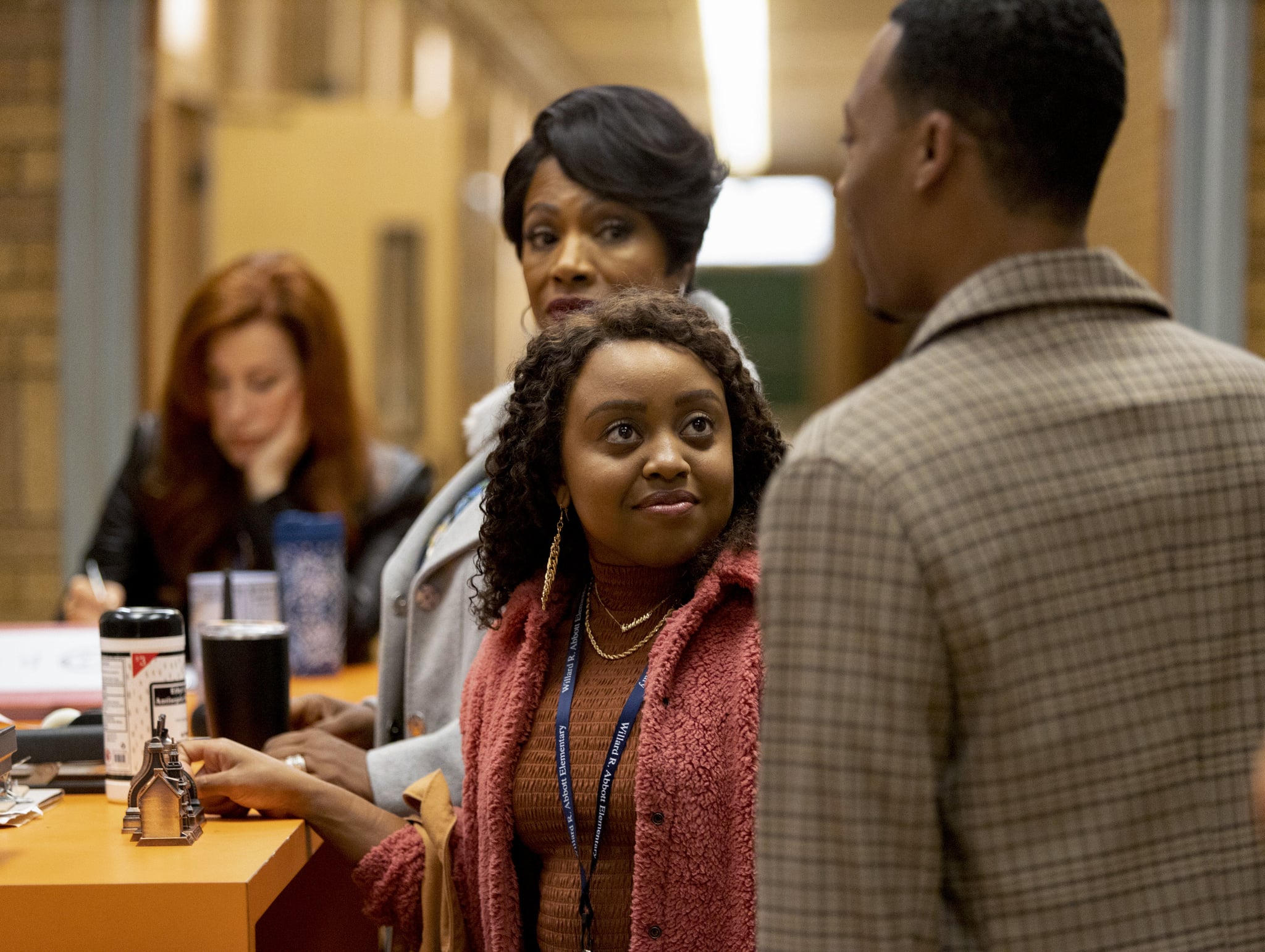 "I feel like those comparisons are, for the most part, out of love," she says. "They're good-faith comparisons. 'The Office' . . . first of all, it was one of the biggest shows on television, and so it makes sense to be compared to it. I think that mockumentary shows, there haven't been that many of them. In America, we've had 'The Office,' 'Parks and Recreation,' 'Modern Family,' 'What We Do in the Shadows,' and that's kind of it." As Brunson points out, "The Office" indeed perfected the mockumentary genre for sitcoms but did not originate the format. Now, "Abbott Elementary" has come along and brought a fresh perspective to the unique comedy style with a story we rarely see on screen.

"The comparisons make total sense, but I believe by the end of the season, it'll be determined that what you're seeing on 'Abbott,' you can't get anywhere else."

Brunson is confident that, in due time, viewers will be able to recognize the show on its own. "The comparisons make total sense, but I believe by the end of the season, it'll be determined that what you're seeing on 'Abbott,' you can't get anywhere else," she says.

Brunson revealed to POPSUGAR that her series was originally pitched as an animated series. "It was because I wasn't available to be in anything live action, or even dedicate time to creating something live action, because I was on another project," she explains. "The idea as a cartoon would take some time to develop and animate, and it'd be awhile before it would come out. But then, as time went on and 'Abbott Elementary' came back to the forefront, it made sense to do it as live action, and I'm so happy we did it that way."

The live-action series certainly paid off for Brunson and its ensemble cast. It's another genius factor for the show: the cast has a chemistry that feels meant to be. According to Brunson, who calls them all "outstanding actors," every single person rightfully earned their role. 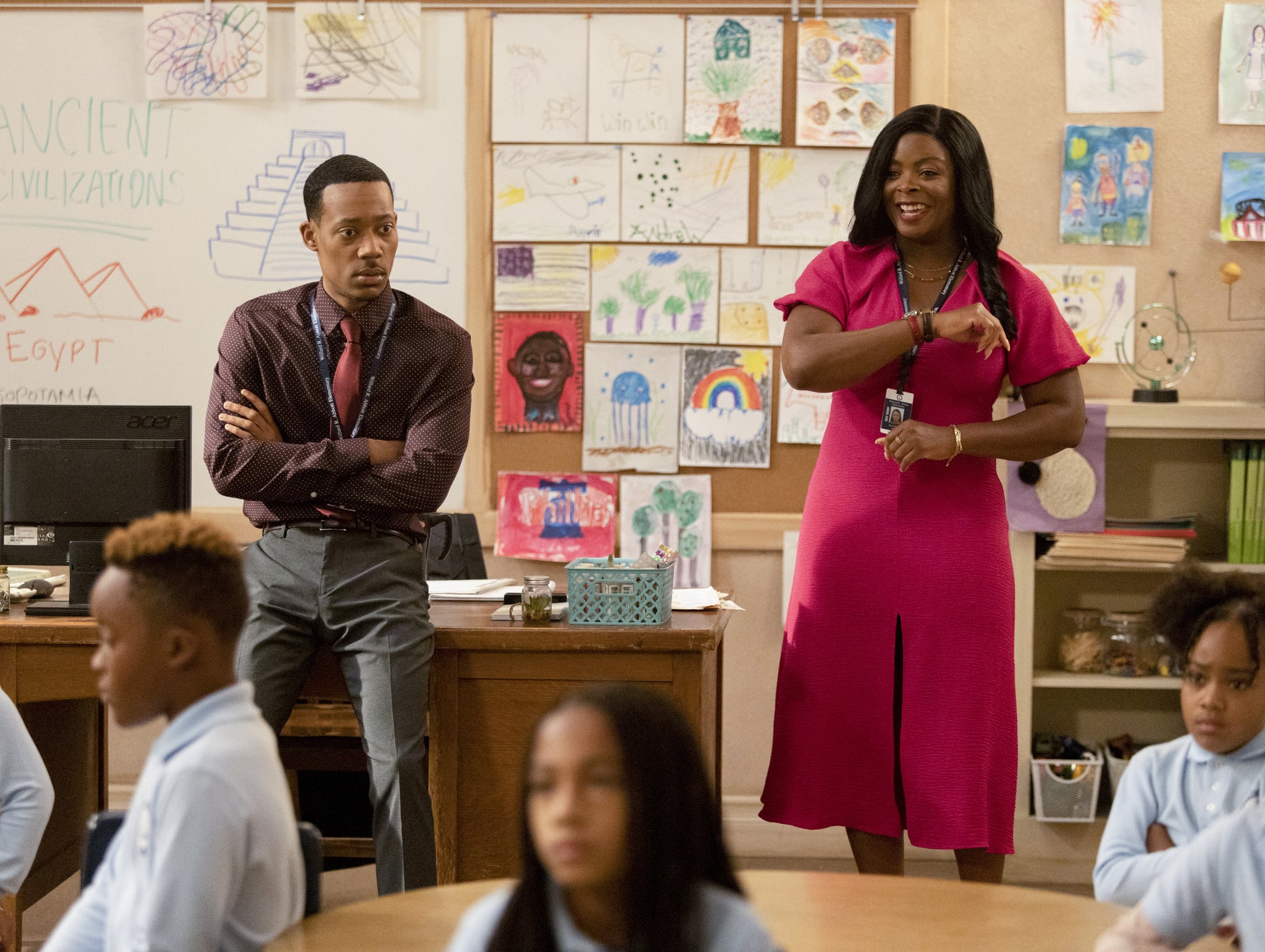 Williams was the first to be cast in the series. Playing Gregory — the substitute teacher gunning for a principal position — was nearly guaranteed. "I was like, 'Wow, Tyler would be perfect for this.' And I realized I was writing with Tyler in mind anyway," Brunson reveals. "So I hit him up and told him, 'Hey, I have this show that I'm making, and I really think you'd be good for this role.' I explained it to him a little bit, and he was basically like, 'I'm down.'"

From there, casting for the series came quite easily because "everyone else just knocked it out of the park." Brunson says Walter and Perfetti were no-brainers, calls Davis a "fantastic actor," and notes that James just had that It factor her character almost requires. She also had faith that Lee Ralph — who she worked with on "A Black Lady Sketch Show" — could bring that superior essence to her character, Barbara Howard, the consummate "Abbott" veteran. So, by the end of the casting process, she had everyone she needed to make her show a success.

"For me, I just could not think of many workplace sitcoms with Black leads."

Some could argue that part of "Abbott Elementary"'s early success can be attributed to the end of "Insecure"'s five-season run, as well as the new wave of Black-led TV shows ("Grand Crew," "Naomi," "Kings of Napa," etc.) that have arrived since. In the short time the show has been on the air, viewers have embraced "Abbott Elementary" as another series that offers a refreshing look at everyday life from the perspectives of Black people.

"It's absolutely part of what I was setting out to do," Brunson says. "I was like, 'I really enjoy all these sitcoms where characters just get to live day to day, specifically workplace sitcoms' . . . and for me, I just could not think of many workplace sitcoms with Black leads. Most of the recent ones, there is one Black person, or a Black person and another person of color in the workplace, but not predominantly. Whereas where I've come from, most of the workplaces were composed of predominantly Black people, and I wanted to reflect that . . . I just thought it would be unique to do that. So I'm happy that people feel that, feel seen, and are enjoying watching this different version of a workplace sitcom."

Outside of providing some much-needed representation, Brunson set out to ensure "Abbott Elementary" could have universal appeal with hints of niche, regional elements to add another layer of depth. As seen in episode four, "New Tech," sneaking in Philly slang is just one of a few clever nods the series makes to its locale. "There are a lot of real-life Philadelphia mentions and references," Brunson says. "Some of them are so deep, in fact, that you just will not get them unless you are from Philadelphia. And I thought that was OK because I think that gave our show even more soul and even more heart." 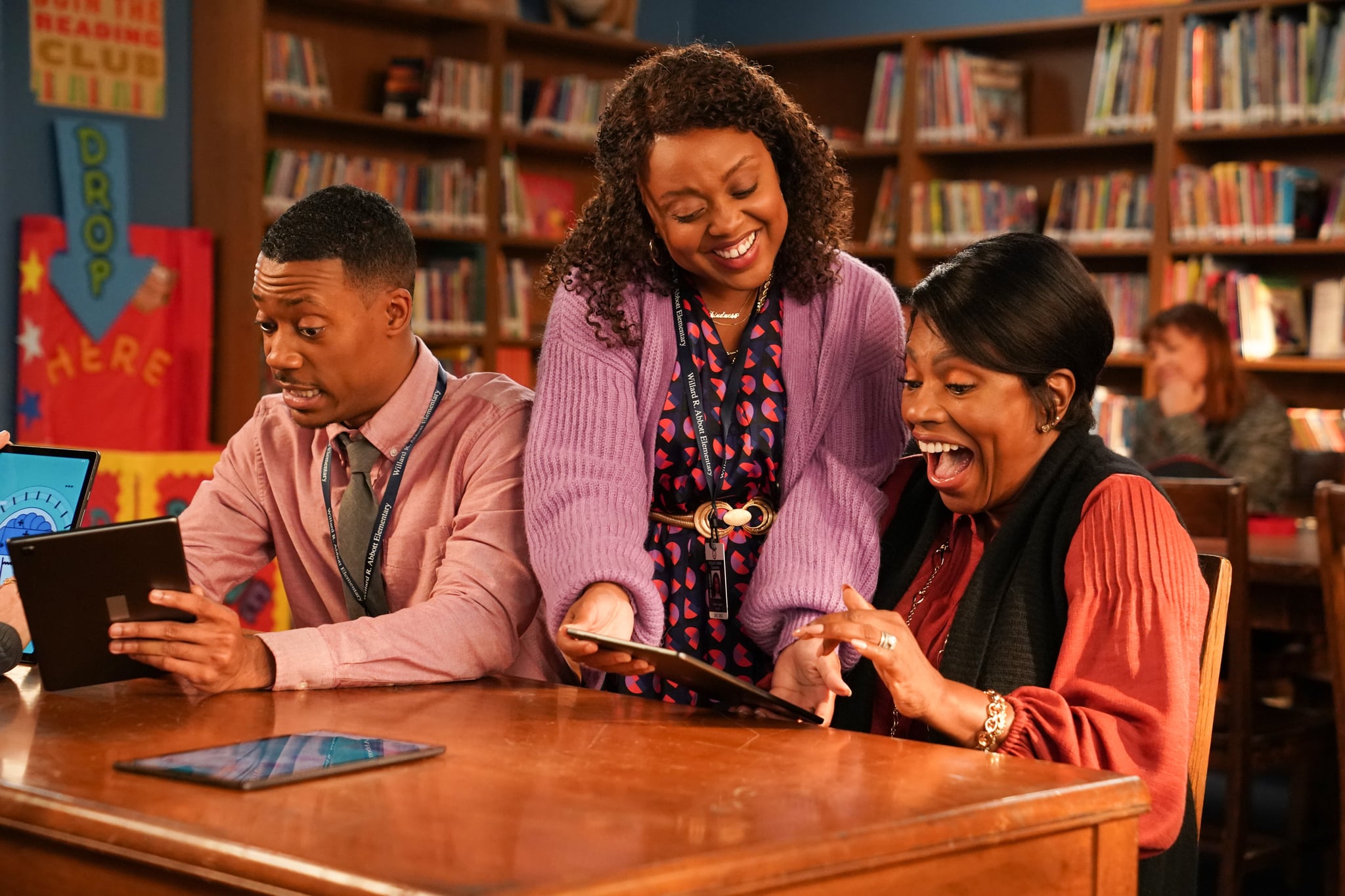 Both Philadelphia and public schools have reputations of being tough places to survive. But Brunson is on a mission to challenge those notions. "We know how tough the places we live are, but we still laugh," she points out. "We still have friends. We still have joy. We still kiki with our friends at work, school, and have fun. And I think that's what I wanted to be special about 'Abbott.' Here you have this school, and people might say, 'Hey, this is sad. These people should be sad.' But they're not. People are so resilient. People find joy. It's a human thing to do. In this country, Black people are specifically good at finding joy despite the hardships of our living situations, and I thought it was important to be able to show that."

"In this country, Black people are specifically good at finding joy despite the hardships of our living situations, and I thought it was important to be able to show that."

To Brunson, the most rewarding part about "Abbott Elementary"'s buzz is seeing so many different audiences interacting with the show — including those who have known her work for years and others who are just getting familiar with it. Although she has other projects currently in the works — including a movie with Sony and another show she'll soon star in — "Abbott Elementary" is Brunson's primary focus. She's determined to "make the best possible version of the show we can" for seasons to come.

The future is certainly bright for the situational comedy, and based on the huge response it's received, Brunson is positive it has the ability to go on for as long as possible. "I would love to be able to make this show for a very long time because I enjoy making it and I enjoy being with these people," she says. "I enjoy our crew, our writers room, [and] honestly, the partnership we have with WB and ABC. It's really respectful and strong. And for all those reasons, I would like to continue to make this show and tell these stories with these teachers, for sure. So hopefully it can just keep going."

"Abbott Elementary" airs on ABC on Tuesdays at 9 p.m. ET.

Movies
KiKi Layne Is Everywhere
by Monica Sisavat 20 hours ago