Like many others right now, Selena Gomez is occupying her time with a little help from friends like Michelle Obama, Oprah Winfrey, and the complete cast of Saturday Night Live — virtually, that is. The singer recently shared her list of entertainment recommendations in an earnest Instagram post featuring candid photos of herself cooking. "I shared a few lists in my stories of things I'm watching, listening to and reading to keep me positive and help pass the time," Gomez wrote. "Hope it helps you."

"Hope it helps you."

Gomez's extensive list of movie recommendations includes recent releases like Invisible Man and Uncut Gems, in addition to cult classics like Clueless and Election. Gomez also appears to be filling her feed with hilarious content, as her list of Instagram accounts to follow includes a nostalgic basement-based video store and one that is a near-perfect re-creation of Gomez's own account, except starring a doll in her place. Perhaps the most intriguing recommendation, however, is on the music list, which includes "Snowchild" by The Weeknd, whom Gomez dated for nearly a year in 2017. Hey, maybe she's just relieved to not have been the entire subject of his recently released heartbreak album, After Hours. (That's for a different ex to worry about.) Later, she shared a playlist with even more tunes for Spotify's Listening Together collection, including songs by Taylor Swift, Kacey Musgraves, and Dolly Parton. Browse all of Gomez's suggestions ahead. 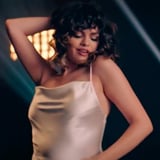