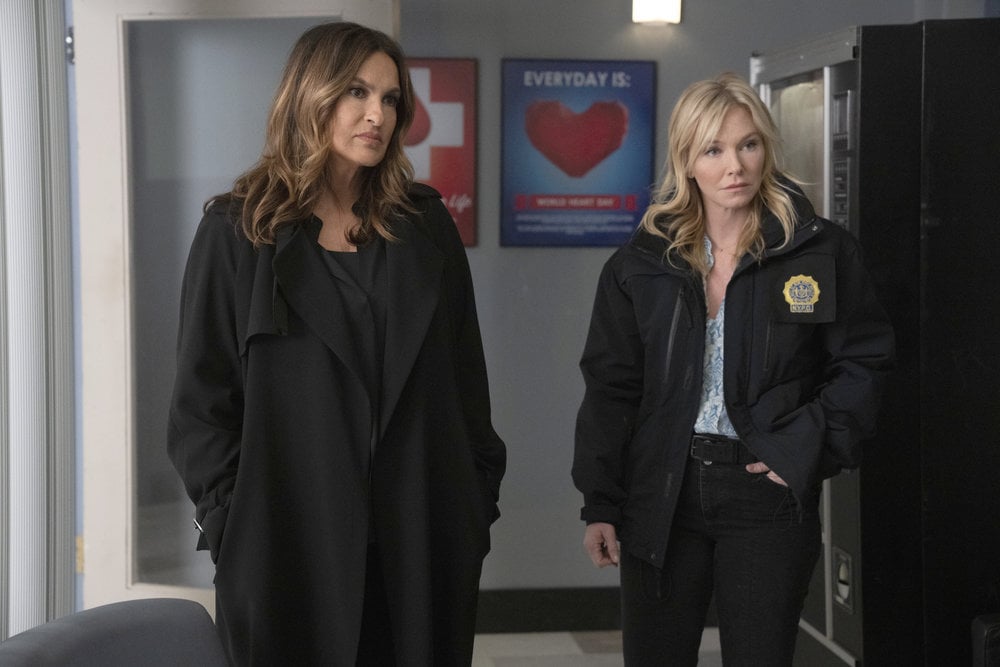 After more than a decade and 12 seasons, Kelli Giddish, aka Detective Amanda Rollins, is making her exit from "Law & Order: SVU," the actor confirmed in an Aug. 24 Instagram post.

"I started on this show when I was in my late 20s and I'm grateful I got to spend so many of my adult years with Rollins in my life."

"I wanted to address the chatter I've seen online and let everyone know that this will, indeed, be my last season on 'Law & Order: SVU,'" Giddish wrote. "Playing Rollins has been one of the greatest joys and privileges of my life. I've been so fortunate to be a part of the 'Law & Order' family for the last 12 years. There is simply no other character on TV like Rollins. She's grown and changed, and I have as well. I started on this show when I was in my late 20s and I'm grateful I got to spend so many of my adult years with Rollins in my life."

Giddish concluded her statement by saying, "I want to thank Dick Wolf, Mariska Hargitay, Warren Leight, Peter Jankowski, NBC, Universal Television, all of my co-stars, every single member on the crew and all the writers here for our incredible work together these last 12 years. I'm so excited to take all the things I have learned in my time on SVU and put them toward everything that's next to come...."

At this time, it's unclear when and how Giddish will be written off "SVU," but TVLine previously reported that an insider said her character will "experience a traumatic event early into season 24." Giddish's exit will likely impact Rollins's romantic relationship with Peter Scanavino's Carisi, as well as the dynamic of the ever-changing SVU team. Viewers will get a chance to see Giddish's final farewell when "SVU" returns for season 24 on Sept. 22, kicking off with a historic three-show crossover with the revived "Law & Order" flagship and "Law & Order: Organized Crime."

Read ahead to learn more about Giddish's "SVU" departure.

Giddish's shocking Instagram statement of her exit prompted angry responses from some "SVU" fans. The actor didn't say exactly why she's leaving the series after season 24, but new showrunner David Graziano wrote a brief explanation in the comments section of her post to calm passionate viewers. "You might take a moment to entertain the idea that things are more complex than they appear in a world of emojis and tweets," he wrote. "All I'll say is Kelli has handled this with the most incredibly classy comportment. She is, without a doubt, one of the finest industry professionals I've come across in my 24 years of writing television. I'm saddened by her looming exit. It'll be my lucky day if I ever get to write for her again."

According to Variety, multiple sources told the outlet Giddish's decision to exit "SVU" wasn't her choice nor Graziano's. The call to have Giddish leave the show was reportedly "made from above," with one insider also pointing out that NBC is "always looking to keep the show as up to date and current as possible."

Reps for NBC did not immediately respond to POPSUGAR's request for comment, but Variety reported that Hargitay, who serves as an executive producer on the series, and at least one other producer pushed to keep Giddish on the show, however, her fate had already been decided. The outlet also noted that salary negotiations and Giddish's future on the show contributed to her departure.

Sources told TVLine that Giddish's final "SVU" episode will air during the first half of season 24, so fans will get more clarity about Rollins's departure soon enough.

What Has the "Law & Order: SVU" Cast Said About Kelli Giddish's Exit??

Following news of Giddish's exit, the "SVU" actor's costars spoke out with bittersweet goodbyes to their longtime castmate. "Oh god, Kelli. I love Kelli, she's my girl," Hargitay told Entertainment Tonight at the "Law & Order" premiere on Sept. 19. "She is one of my favorite actors that I've ever worked with and we got to build something really beautiful together and really earned together because our characters had quite a journey. . . . I will miss that because she was my go-to, my right hand, the woman that I could talk to. . . . I'm gonna miss her a lot, but she's a lifelong friend and I'm just glad that our paths crossed, and I know they'll continue to cross."

Ice-T also shared similar sentiments after he told People that Giddish's shocking exit was the result of calls "from higher up." "It's a sad thing," he said. "Me and Kelli were friends — dog friends and all that. We became close. Kelli's been here 10 years. . . . When I heard about [her exit], I called to check on my pulse, like, 'What's going on?' But this is the business we're in, and they shuffle the deck occasionally." The original "SVU" star also said that, as of the show's red carpet premiere, Giddish's final episode still has not been filmed. "I'm not even sure she's gone until they shoot that episode," he added, "because you never know. . . . Kelli will be missed."

"SVU" newcomer Octavio Pisano added to the cast's farewells and told People, "When I came to the show last season, Kelli was the first one to kind of take me under her wing . . . Obviously I'm really sad, but I'm truly excited about the next chapter in her life because she's an amazing talent. I've learned so much from her in terms of acting and all kinds of things. So more than anything I'm excited, but obviously it's bittersweet."

Stranger Things
Caleb McLaughlin on Racism From "Stranger Things" Fans: "It Definitely Took a Toll on Me"
by Chanel Vargas 21 hours ago