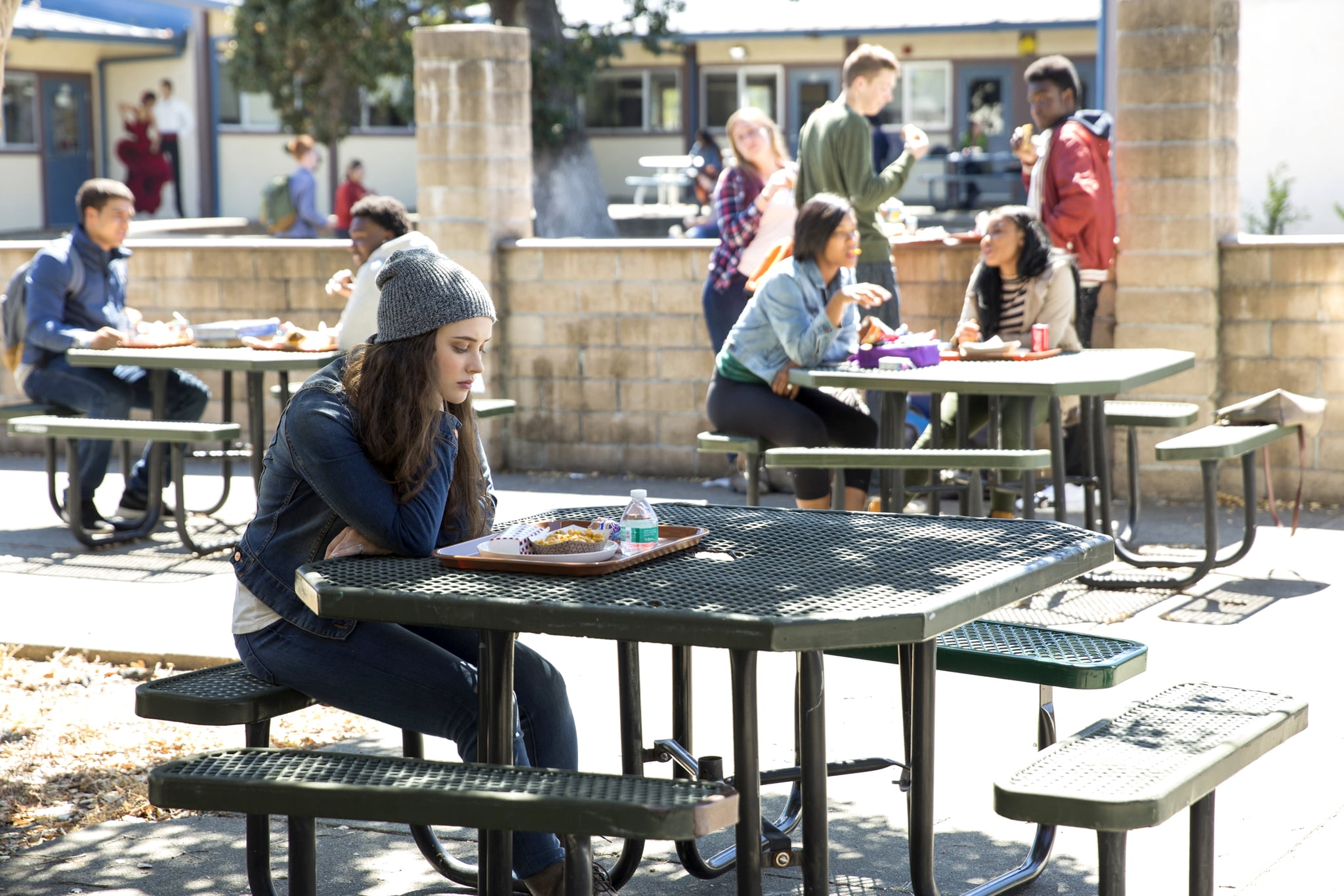 A debate has erupted in the wake of 13 Reasons Why's remarkable success. Netflix's series, based on the book by Jay Asher, shows the events leading up to the suicide of a teenager named Hannah. More notably, though, it shows the devastating aftermath. While parents should be aware of all the disturbing events within the series before they chose to let their kids see it, there's a rising faction of viewers who have been so struck by the way the series portrays bullying and suicide who think it should be mandatory viewing for students.

It's a controversial stance, given how much backlash Netflix is getting for the graphic suicide scene. (If you haven't seen the series, Hannah slices her wrists in a bathtub.) Australian mental heath group Headspace is speaking out against the series, warning that it "exposes viewers to risky suicide content." Netflix has responded by agreeing to update its trigger warnings, but Headspace's biggest point is that even showing kids a series like this will make them think of suicide more.

Michelle Mousa, a sixth grade CORE teacher at Sequoia Middle School in Pleasant Hill, CA, echoed the sentiment. Mousa said the show has ripped through her campus "like a tornado," and when asked whether kids would benefit from seeing the show in school, she said, "My first reaction is why would we give it more energy? It's snowballed. But again, this point of view is powerful because it's not really about one particular bully. It's about the broken society that allows this kind of mean-spirited world to continue."

Mousa mentioned that her school is considering other ways to address 13 Reasons Why with the students (via an assembly or a note in the school bulletin warning parents to watch it with their children), but is concerned about the bigger picture: "We have a televised bulletin that is put on every day by the students, and they do PSAs on antibullying all the time. Oftentimes the educators feel that we're inundated with antibullying campaigns, but yet why aren't we talking about random acts of kindness, or being positive?" 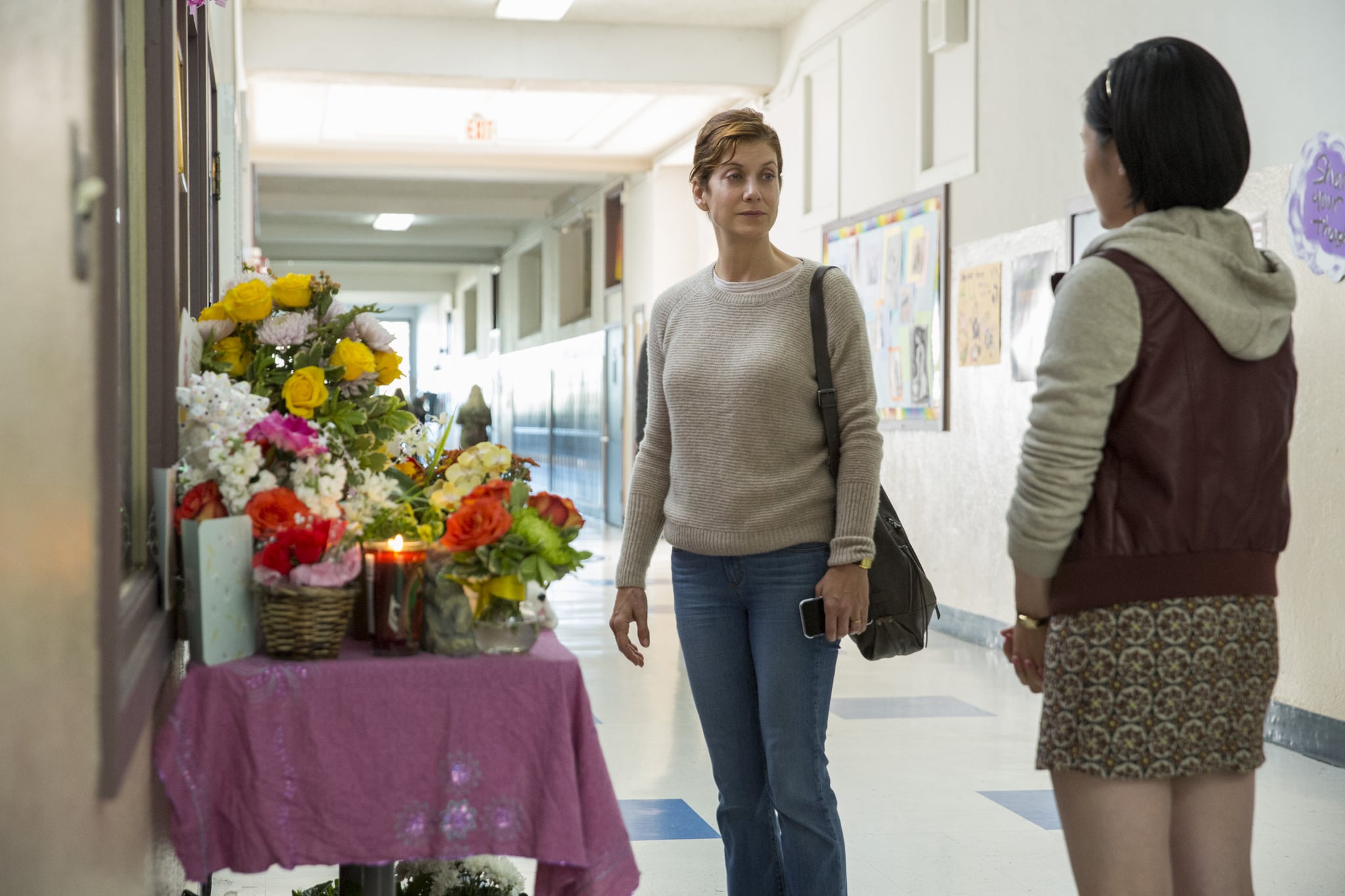 Star Kate Walsh recently put her two cents in, telling The Huffington Post, "I really do think it should be mandatory in schools to watch this and talk about it and have education around it. Unfortunately, a lot of kids' lives were lost before schools started having conversations and awareness, and communities started having dialogue about it. As long as anything is shrouded in shame or secrecy, nothing good can come from it."

Whether it's the graphic suicide or the realistic depictions of rape within the show, something seems to have hit a chord with younger viewers — but just what are they taking away from it? Are freshman drawing parallels to their own lives and reaching out to peers who may be in need? Or are youths who are struggling with depression seeing this as a glamorous way to end their lives? Even if the answer is "both," is it worth attempting to get through to bullies and potential rapists at the risk of pushing suicidal teens over the edge?

We spoke with ProtectHer founder Alexis Jones, who goes into high school locker rooms to educate teen athletes about sexual assault, and she thinks that because the show is so well written and acted it has a better chance to get through to kids than any presentation ever could. "Because it's fiction, it allows us to talk about the issues through these characters," she said. "It's exponentially more powerful than coming in with a PowerPoint. That is not nearly as effective as watching a show, getting invested in characters, and then talking about the different aspects. It gives us these individuals to point to and to say, 'If you're ever feeling like Hannah felt, let's make sure you get help because look at how many people cared about Hannah.' It gives us the context to talk about suicide and sexual assault."

Related:
How Not to Be Obsolete Like the Parents In 13 Reasons Why

That last part? It's the most vital takeaway from this whole debate. Whether parents choose to show the series to their kids or teachers gain permission to show it to students, it needs to be more than a screening. "The most important part of showing this in school would be the discussion," said Haley Roberts, a licensed baccalaureate social worker. "There needs to be a discussion about what is going on in each episode, because each episode has so many major themes." Roberts went on to say possible discussion topics should be signs and symptoms of depression or suicidal thoughts, bullying (and its cowardly cousin, cyberbullying), and effective communication between teens and parents — all of which are themes woven into the show itself. As Mousa put it, "It's the kind of thing that needs to be paused, and talked about, because there are a lot of scenes that are disturbing."

The teacher, the activist, and the social worker all said the same thing: this isn't a show kids (particularly young ones) should watch on their own. This is a show to be watched and talked about in an educational way. It's a show that parents can use as a tool to talk to their kids. It's emotional, it's disturbing, and it may be flat-out necessary for kids to realize how their actions affect others — as long as an adult is helping them come to that conclusion.

Halston
Halston: If You Were Wondering, Here's Why the Designer Loved Orchids So Much
by Stacey Nguyen 19 hours ago

TV
Who the Eff Is Annabelle? 7 Theories About Cruel Summer's Latest Mystery
by Divya Meena 20 hours ago

Tweens and Teens
35 Book Series For Tweens, From Stories About Greek Gods to Kids on a Track Team
by Alessia Santoro 20 hours ago