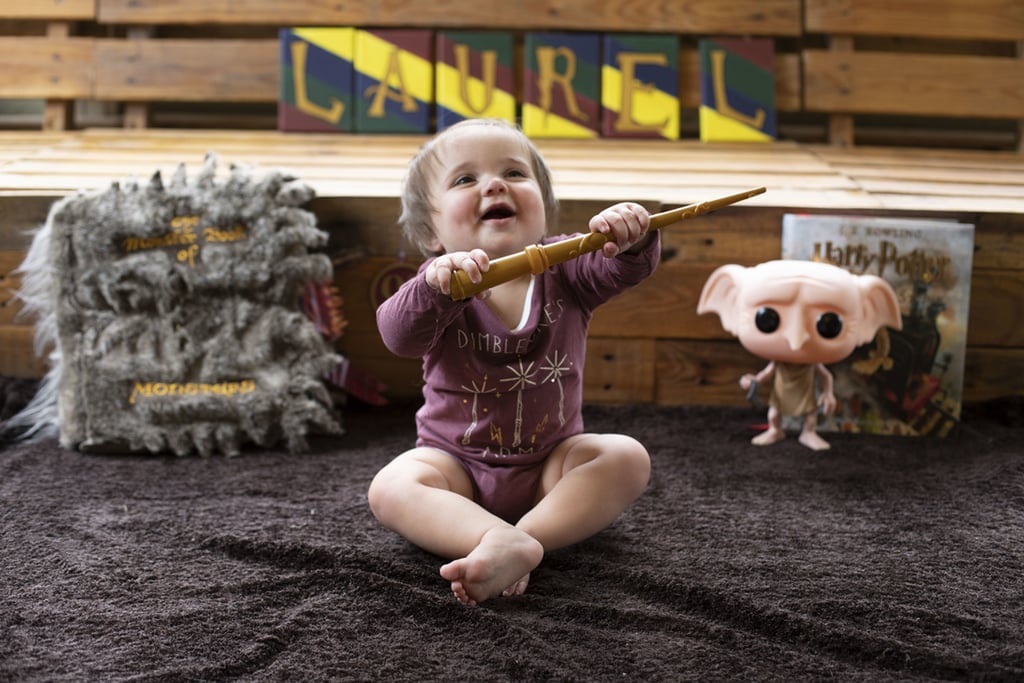 Someone call Madam Pomfrey because this baby's Harry Potter photo shoot is too cute for my heart to handle. Proud Ravenclaws Kim and Nick Peterson were excited to pass on their love of Harry Potter to their daughter, Laurel, starting with a series of photo shoots featuring her in all of the cutest wizarding gear — and she's absolutely working that Sorting Hat!

Baby Laurel was only a newborn for her very first photo shoot — which was done by Chris and Christina from A Focused Life Photography in Loganville, GA — but her parents' love for Harry Potter isn't the only thing that makes her so magical. "The fact that we struggled with infertility for years and then suddenly found out we were unexpectedly pregnant was pretty magical," the couple told POPSUGAR via email. "Harry Potter reminds us that, even when things seem impossible, faith, persistence, and sometimes a little luck can make amazing things happen."

Kim and Nick decided to document baby Laurel's first year of life at different stages (newborn, six months, 9 3/4 months, and one year). "We wanted to capture how much she had grown!" Kim said. "Who doesn't want a ton of pictures of their baby growing up? The 9 3/4 months pictures were, of course, a nod to Platform 9 3/4 . . . Babies change so much in their first year, we wanted to have a multitude of pictures to commemorate her first year."

"Newborn pictures were pretty straightforward, but since she has become mobile – she has her own ideas."

While the proud wizarding parents were happy to dress Laurel up in Gryffindor-themed outfits from family and friends and surround her with a variety of wizard-friendly props to pose with, Laurel herself wasn't too happy about it. "Laurel absolutely hates getting her picture taken and posing," her parents said. "Newborn pictures were pretty straightforward, but since she has become mobile, she has her own ideas. She spends a lot of time fighting us while getting her picture taken now that she is getting older."

Even though she can't sit still long enough to listen to any of the Harry Potter books for more than a few sentences, there were a few props that baby Laurel found to be pretty fun to hold — and nibble on. "She really enjoyed playing with the snitch – maybe she will grow up to be a seeker!" Kim and Nick said. "She also really liked to chew on Dobby's nose and ears, as well as the various wands we have." With that kind of wizarding spirit, she sure sounds like a Gryffindor to us!

While Laurel was dressed like a Gryffindor for most of her photo shoots, Ravenclaws Kim and Nick said they will love her no matter which house she grows up to be in. "I've noticed with my other children that their houses have changed several times over the course of their lives so far," Kim said. "Right now my older two children are Hufflepuffs, so if Laurel turns out to be a Hufflepuff, she will fit right in . . . If I had to guess her house now, I would definitely place her in Slytherin — though, aren't all toddlers ambitious and cunning?"

Regardless of Laurel's future Hogwarts house, Kim and Nick hope that their daughter can look back at the photos when she's older and appreciate that she was the most magical part of every single one. "We hope that she will be able to look at the pictures and smile and appreciate the fandom," the couple added. "Whether she grows up to love the Harry Potter universe or not, we would love for her to understand the meaning that is behind the photographs and why they are special to us."

Books
Jennette McCurdy Details Abuse by Her Mother, Her Difficult Nickelodeon Experience in Memoir
by Lindsay Kimble 8 hours ago