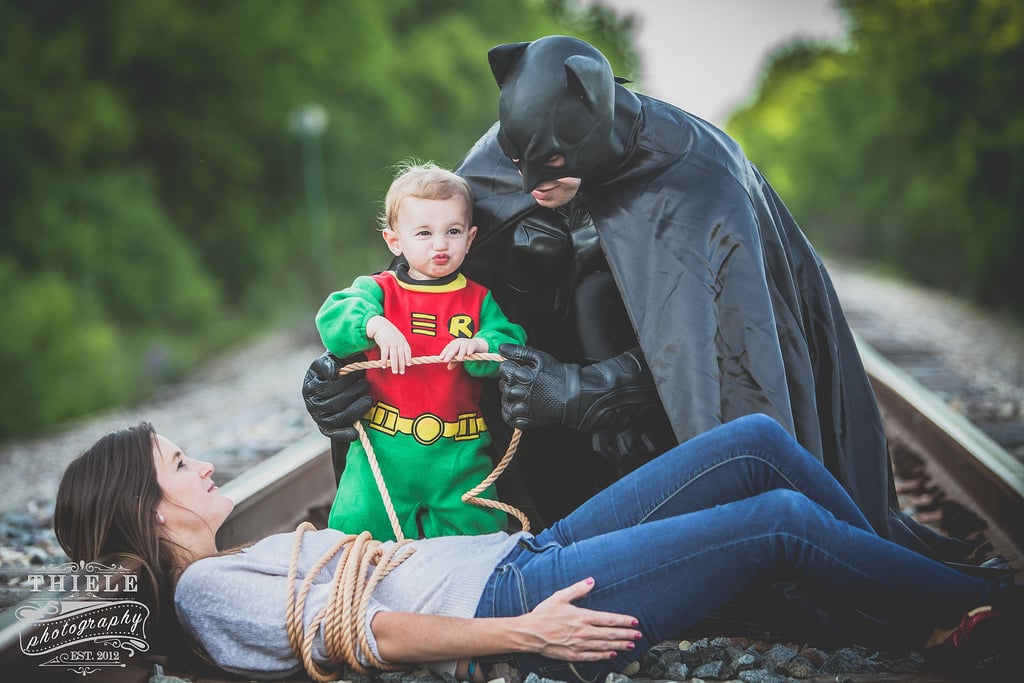 We see a lot of family photos on any given day, so it's rare that one will stop us in our tracks. But with one KAPOW-worthy look, this Batman-themed photo shoot stole our hearts.

Shot by photographer Eric Thiele, the idea for such an elaborate comic-book-inspired photo session came from the wife, not the Batman-obsessed husband.

"I have done a lot of shoots over the years, and most of them have been your typical family shoots — trees and nature, 'look this way, smile . . . ,'" Thiele told us. "When Roxanne came to me with the idea of doing a surprise Batman and Robin photo shoot for her husband for Father's Day, I knew I hit the jackpot of customer awesome-ness. I brought up this idea of having her being saved by her superhero husband and son."

Roxanne's husband Mike had no idea until they arrived on location what was going on – the suit was an old Halloween costume. Like any good action sequence, however, the shoot, which took place in Wisconsin on an unseasonably warm day, was met with some curveballs.

"I knew we needed to shoot quickly since Mike, who played Batman, and Finn, who was Robin, were suited up in what looked like rather warm costumes," Thiele said. "We got a lot of smiling and waving people driving by, which actually worked out nicely to keep Finn looking straight forward towards my camera."

And as for how he and the family have handled the overwhelming response to the finished photos?

"The family and I have been geeking out over the response that the shoot has gotten and are already planning our next themed shoot," he told us, adding that Roxanne found him after he posted a deal for a 45-minute session for only $50. "I guess everyone will have to wait and see what we come up with next. We promise to not disappoint!"