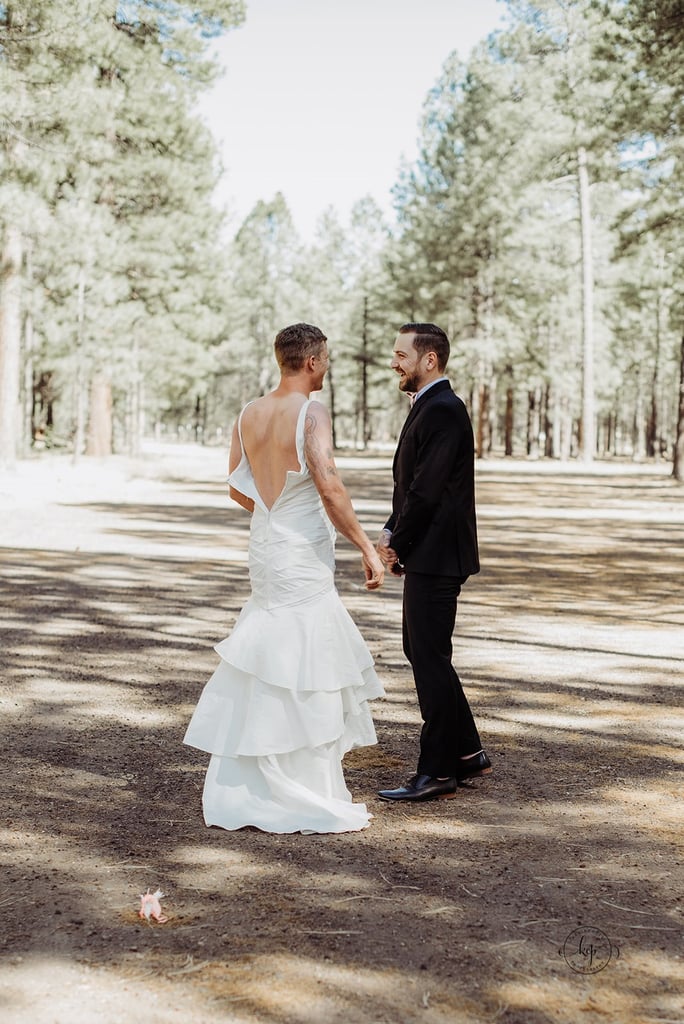 After taking pictures at numerous weddings over the years, Nichole Cline, a photographer from Vail, AZ, has her fair share of sweet stories about couples tying the knot. But nothing in her career had prepared her for her friend Heidi's decision to prank her husband, Val, during their vow renewal by sending her brother Eric out to the first look in her friend's wedding dress.

"About two hours before the ceremony, Heidi called me and said that we needed to send Eric out to the first look in a wedding dress," Nichole told POPSUGAR. "She asked me what I thought about that, and I was like, 'Yeah, that's so cool!' They ended up sending him outside to meet Val at that moment. He asked her for her deodorant and her perfume and sprayed it all over himself to make sure he smelled like her."

Related:
Wedding Photographer on Prioritizing a Photo of the Bride's Son Over Her: "This Was THE Moment"

As you can imagine, pulling off the epic prank took a little bit of finesse on Nichole's part.

"We positioned Eric just right to make sure that Heidi could see him behind the door but that Val couldn't see her," explained Nichole. "She was at the top of the bridal suite in the barn so she was able to watch without Val seeing her or Eric walking up."

"At one point, it looked like Val was going to kiss Eric and Val was like, 'Wow! This is brotherly love!'"

"He just died laughing," said Nichole. "He thought it was hysterical. At one point, it looked like Val was going to kiss Eric, and Val was like 'Wow! This is brotherly love!' He was just so ecstatic about it all and pleasantly surprised by the whole situation."

After a few minutes of laughter, Heidi went back downstairs for her real first look, and Val was taken by surprise for a different reason.

"When Heidi came down for the actual first look, Val was like, 'This isn't her! She's going to send her other brother Carson down next!' Then Heidi went and grabbed his hand — he was just in awe of her, so it was absolutely incredible," said Nichole.

Read through to see the photos from the memorable day, and try your very best not to giggle.

Wedding
I Have to Store My Wedding Dress For a Year, So I’m Using These Expert Tips to Keep It Safe
by Alessia Santoro 2 days ago

Disney
This Couple Celebrated Their Love With an Enchanting Mermaid Shoot, and It Got Steamy
by Zara Patel 3 days ago