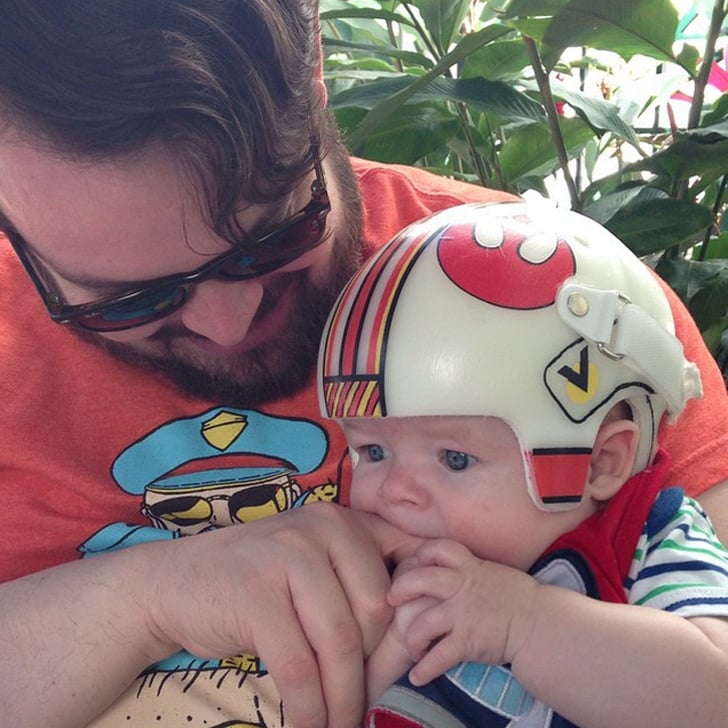 When His Newborn Son Needed to Wear a Helmet Every Day For a Year, This Dad Got Creative

When 2-month-old Jack Moxey was at his pediatrician's office, the doctor noticed something strange about the shape of his head.

"Up to that point, we had talked a bit about his head size, but we chalked that mostly up to genetics as he is the fourth generation of big heads," Lauren Moxey, Jack's mom, joked to us. Unfortunately, after an X-ray, they learned their baby had craniosynostosis — a birth defect in which one or more of the joints between the bones of a baby's skull close prematurely, before the brain is fully formed.

After learning their options, they decided on a minimally invasive surgery as opposed to a more extreme procedure, but it required a then-12-week-old Jack to wear a protective helmet at least 22 hours a day, every day until his first birthday.

After the shock passed, Jack's dad, Jonathan, decided the plain white helmet issued by the St. Louis-area hospital wasn't going to cut it.

"If we were going to be doing this anyway, we might as well have fun, right?" Jonathan told us. "We thought they'd look fun, and it changes the comments from strangers to, 'What happened to your kid?' to 'Oh, cool helmet!'"

A lifelong Star Wars fan, Jonathan thought the helmet shape was similar to those worn by X-wing starfighter pilots. Jack's first helmet, R2-D2, was a kit given to the family as a surprise, but his next three helmets were hand painted by Jonathan after Jack went to bed at night.

Thanks to the parents' Instagram feeds, the creations have been a hit among family and friends, but Jack was "pretty indifferent to the helmet most of the time," Jonathan said. "They didn't breathe very well, so sometimes he'd get mad because he was hot, and then hot because he was mad, and so on."

Today is Jack's first birthday, and as cool as the helmets looked, he thankfully no longer needs to wear them. Other than the fact that his parents "just need to keep a better eye on him as he moves from cruising to walking" – a hidden benefit, Jonathan said, of a newly mobile baby wearing headgear! – it's great news. Especially considering that boy's gorgeous head of hair.

Read on to see photos of Jonathan crafting each helmet, the amazing finished products, and, of course, a picture of Jack celebrating his birthday helmet-free.