Dad and blogger Ken Harbaugh talks about having to tell his daughter what the other "s" word meant where this article originally appeared on Fatherly. 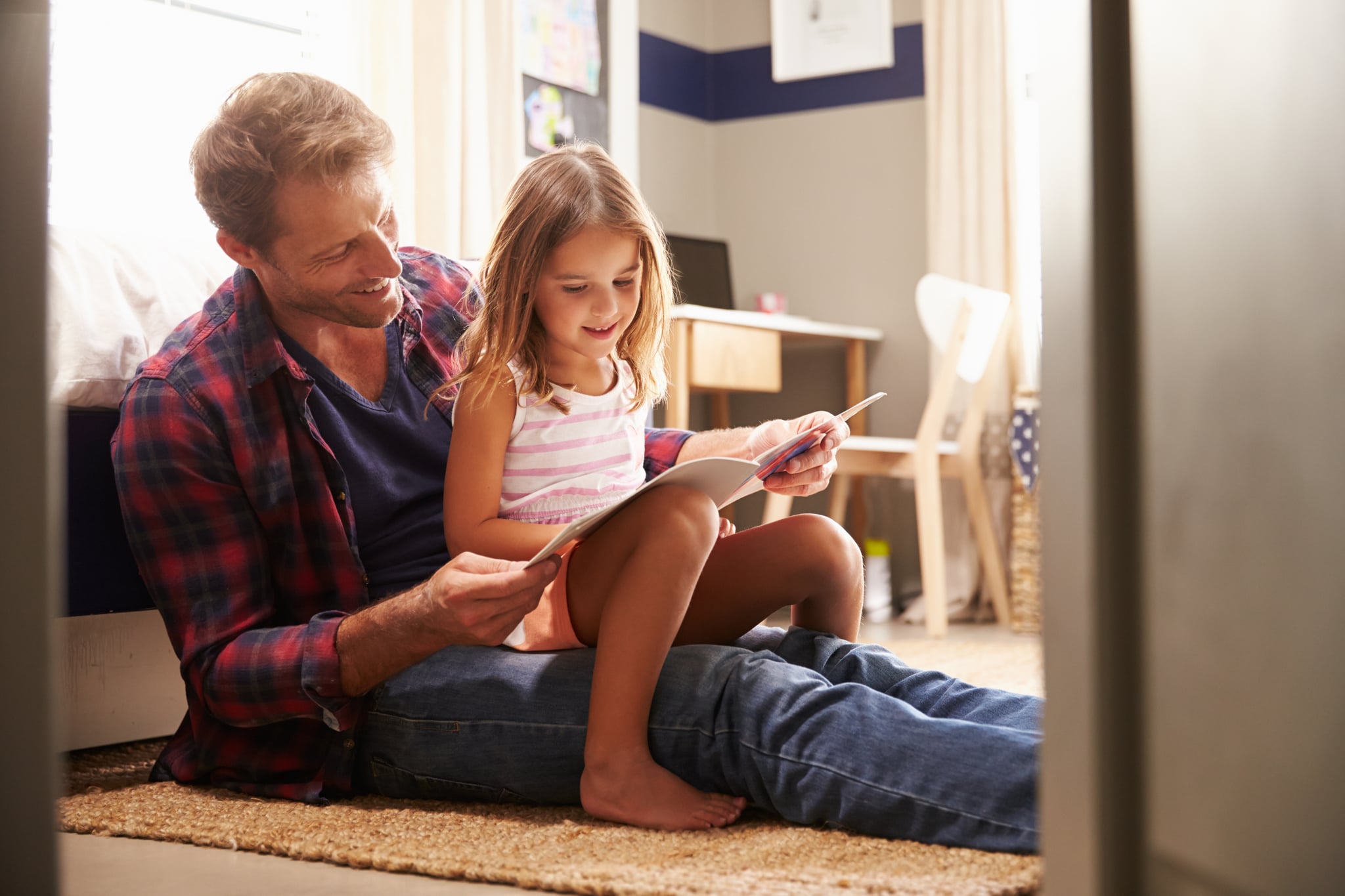 A fundamental truth of parenting is that you will come to despise the movies your children love most. This has little to do with the movie itself, but with the fact that you will be forced to watch it ten thousand times. It may be a perfectly lovable film, like Finding Nemo or The Little Mermaid, but even lovable gets old after a while.

It is actually validating to hate your kid's favorite movie right away. Such was the case with a certain musical from 2008. It featured terrible acting, even worse singing, and the most inane plot I had ever been forced to sit through. Katie adored it. The movie was Mamma Mia!, a film which ruined Abba for dads everywhere.

My wife took Katie to see it at the theatre, and they both fell in love. My brother, upon learning it was his niece's favorite, ordered the DVD for her. It arrived a week early, just in time for our road trip from Connecticut to my parents' farm in Texas. Any way you approach it, that is a long drive. Measured in 98-minute Mamma Mia! increments, the drive is interminable.

Even Annmarie, who saw some redeeming value in the movie (Colin Firth), grew sick of it. But it passed the time for Katie, and that seemed the least we could do for a child trapped in a minivan for 10 hours a day. We played 'I Spy' and the license plate game, but Katie grew tired of everything. Except Mamma Mia! We allowed it, since the road trip felt like the first time my wife and I had to talk, and with her six weeks pregnant (we just found out), we had lots to talk about.

The real trouble with Katie and the movie started a few weeks later. After we returned from Texas, my angel asked me what a "slut" was. I was taken aback, but I put on my serious face, looked her in the eye, and said, "Go ask your mother."

I don't quite recall the conversation I had with my wife later that evening, except that my plea of "cowardice" carried me through. I do remember saying, more than once, "No, I was not implying that you have special insider knowledge about sluttiness. I just thought it was your job to explain those kinds of things."

After a lengthy argument, which I lost, and a lecture about how feminism means men can be sluts too, we established that the job of explaining charged language is, in fact, a shared responsibility. But I wondered why Katie had asked such a question in the first place. A friend from school seemed the most likely source. Then Annmarie remembered a throwaway line in Mamma Mia!, in which the talentless protagonist calls herself a "stupid reckless little slut."

At last we had our culprit. One word, buried in a bad musical, that neither of us had really noticed. But Katie sure did. So we had a talk. "A slut," we explained to her, "is a girl who makes . . . bad choices." Katie bought it. That, it seemed, was the end of it.

The next day, I got a call from school. I saw the number listed on the caller ID and experienced that brief moment of panic every parent knows all too well. "Is my kid hurt?" Good teachers anticipate this. The first thing I heard when I picked up the phone was "Katie is fine." I breathed a sigh of relief. "But I think we should schedule a conference."

When I walked through the door of the school, I noticed every teacher doing their best to avoid eye contact. This is a bad, I thought. In the director's office, I learned that Katie had called Caroline a 'slut.' This was clearly a serious matter, made all the worse by my inability to keep from laughing. I apologized, and explained our conversation the night before about Mamma Mia!

Katie had been coloring with her best friend. At some point, Caroline chose to color a horse green. A disagreement ensued over the best color for horses. Katie maintained that green was a bad choice. The argument ended with Katie asserting, loud enough for every teacher to hear: "Caroline, you can't color a horse green, you slut."

From Katie's standpoint, it made perfect sense. So when Mom and I had another conversation with her, it must have been confusing. "You will never, ever," we told her, "call people that word."

For a child, language is power. The average 3-year-old acquires something like 10 new words every week. Most of those simply help the child communicate needs and desires. But some words are weapons. The second we told Katie that this particular one was off limits, she knew she owned something powerful. And she was smart enough to save it for just the right moment.

Lucky for me, that moment happened on my wife's watch. Katie wanted something she couldn't have, probably a cookie or a bag of sugar, and when Mom said "No," Katie pulled out the big gun. She stared her mother straight in the face, and said, "Slut." It was the first time Katie had been intentionally hurtful with her words. Annmarie reacted exactly as I would have. She carried Katie to her "timeout spot" at the bottom of the stairs. She said, again, "We do NOT use that word."

Normally, timeouts go this way: Annmarie or I count slowly to 10 (15 for the really bad choices), Katie calms down, then we say, "What can you say about that choice?" Katie apologizes, and we move on. This time, Katie sat through the entire 15 seconds with her arms crossed in defiance. When Annmarie asked if there was anything she wanted to say, Katie looked her in the eye and said, "Slut, slut, slut . . . slut!"

In our home, discipline had never gone past the timeout. Clearly, something more impactful was required, but hell if we knew what it was. Our initial strategy was to take away something Katie loved — dessert. But we knew we needed help figuring out what to do next.

Katie's teacher, Nicole, was kind enough to sit down with us again the next day. We explained we were having difficulty reigning in Katie's use of her new favorite word.

"Are there any major changes in your life that Katie might be picking up on?" the teacher asked. She went on to explain that Katie had been spirited again at school today, refusing to put on her coat for recess.

What does that have to with slut? I wondered. Annmarie and I looked at each other. "Nothing that I can think of," she said. Then the realization hit us both at once. "Well, I am pregnant," Annmarie confessed. "But it is early, so we haven't told Katie yet," I added.

"Congratulations," said Nicole. "But I think you need to tell her. Because I think deep down, she already knows. That could be the source of these power struggles we have seen over the past week."

We were dumbstruck. Our whole approach to welcoming the new addition to our family was to keep it from Katie for as long as possible. We knew the next 7-and-a-half months would seem interminable to her — like the drive to Texas was for us — and we did not want her to worry about her place in our hearts. So we had decided to keep her in the dark. It was the ultimate bad choice.

Katie had perceived something was changing with Mom, and with the whole family. She may have even registered our minivan talk about the new baby. Kids have a funny way of noticing things that pass right by their parents, and the fact that we were hiding it made things worse. Katie felt even less a part of the family, and her acting out was merely a symptom. Her new word gave her power she felt she was losing, and she exercised it whenever it was certain to garner the most attention.

We felt like terrible parents. Had we messed up our child for good? But it turns out kids are about as resilient as they are perceptive. Nicole's advice was perfect. "Take Katie somewhere special for dinner, and tell her about this wonderful journey. If it's a big deal for you, imagine what it must be like for her."

That night, we went out for sushi. We told Katie she was going to be a big sister, and immediately knew it was the right call. She could not have been more excited. All through dinner, she talked about all the things she would teach the new baby.

"Daddy, I'll teach her how to swim, and how to sing, and how to use chopsticks. And I'll share all my favorite things: my bunny, my jewelry box, even Mamma Mia!"

"How about Finding Nemo instead?" I suggested. "The new baby will probably be too little to understand your big girl movie."

"Okay, Daddy." Katie smiled. It was the kind of deep, honest smile that Annmarie and I both realized we had not seen in days. Then she put on her question face, brow furrowed and eyes squinted. "Daddy, can I teach her how to spell words?"

"Of course, sweetheart, you can teach her how to spell anything you want," I said. "You are going to make a fantastic big sister."

Ken Harbaugh holds a Juris Doctor from Yale Law School and used to be a US Navy Pilot. He has been features in the Huffington Post, NY Times, and NPR. You can check out more of his writing here.

Toddlers
I Treat My Child's Schedule Like I Did My Job's Calendar and, Hear Me Out, It Works
by Lauren Manaker 1 day ago

Pregnancy
I Didn't Know If I Would Ever Have a Baby, So I Consulted a Psychic
by Rachel Spalding 2 days ago