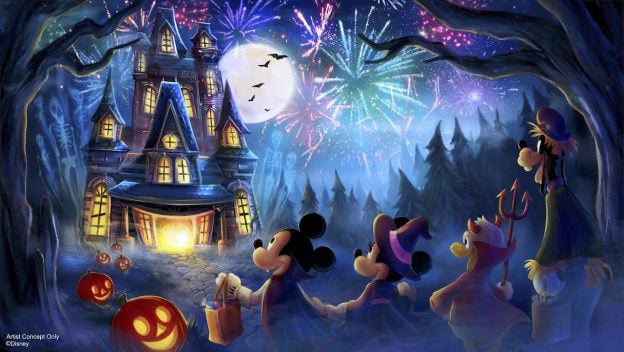 It's time to start thinking up your Halloween costume, because Mickey's Not-So-Scary Halloween Party will be back at Walt Disney World's Magic Kingdom this year, and it's going to be bigger and brighter than ever with a dazzling new fireworks show.

This is the first time in 14 years that the Halloween Party has introduced fireworks, and in true Disney fashion, there's a story that will go along with the show. With the help of a few projection effects, lasers, lighting, and some seriously cool fireworks, the display will tell the story of Mickey Mouse, Minnie Mouse, Donald Duck, and Goofy as they make their way through a haunted house to do some good old-fashioned trick-or-treating. In exploring the different rooms of the not-so-haunted house, Mickey and his friends encounter waltzing ghosts, dancing skeletons, and a whole slew of Disney villains partying it up.

Related:
Hang Out With Some of Disney's Most Chilling Villains at Disney World's After-Hours Spectacular

Fireworks aside, longtime fans of Mickey's Not-So-Scary Halloween Party can also expect to experience some old favorites — including trick-or-treating around the park and watching Mickey's Boo-to-You Halloween Parade, featuring a few infamous Disney villains. Tickets start at $79, and the fireworks show will be on display during select nights from Aug. 16 to Nov. 1. So make sure your phone is charged, because you're going to want to capture every moment of this fireworks spectacular!