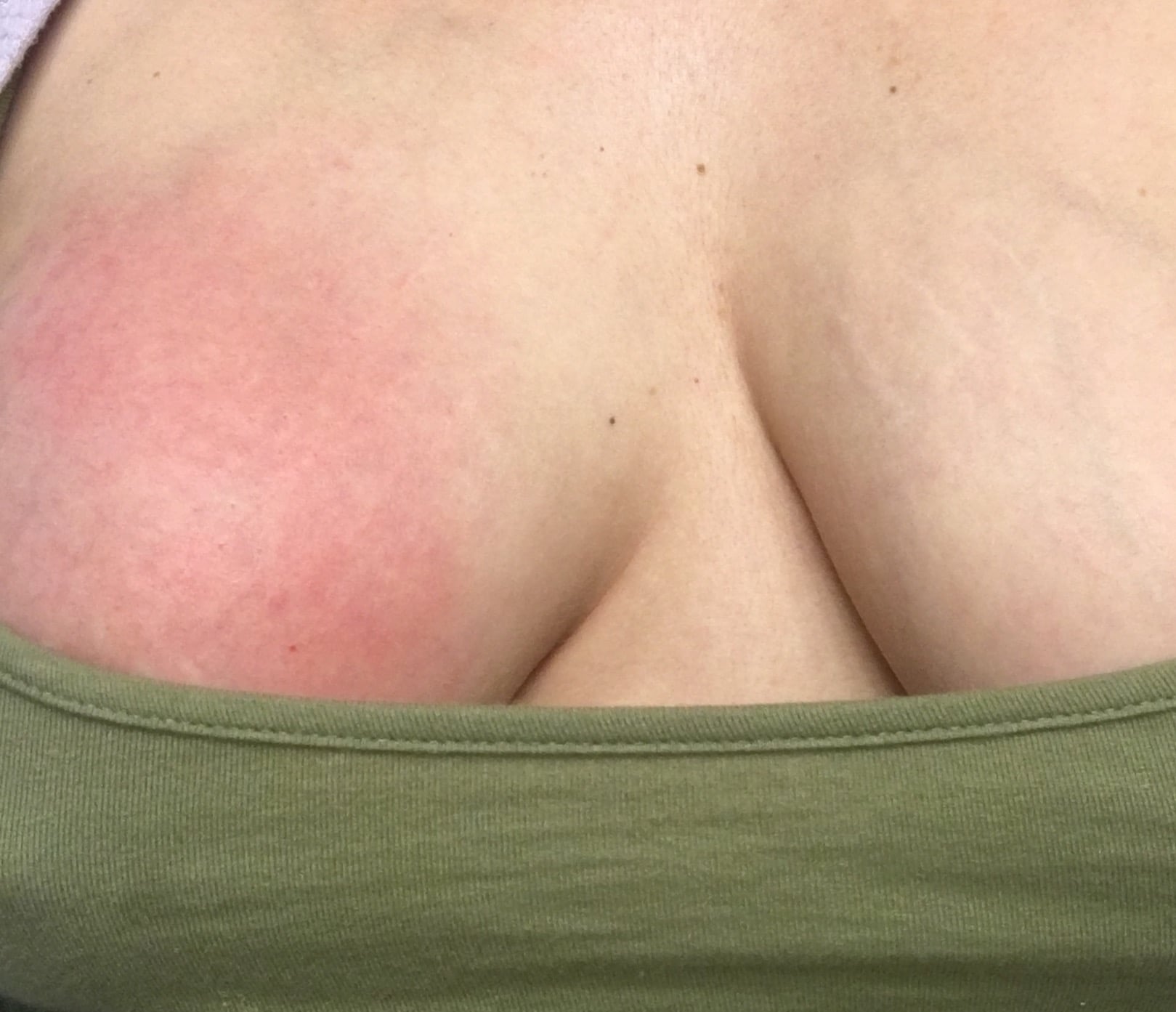 Ah, breastfeeding. Few other topics will divide or unite a group of mothers quite like this one. Almost everything you will hear or read about breastfeeding is positive, except of course for the whole breastfeeding in public nonsense (yes, please feed your babies whenever and wherever you want to!). As wonderful as breastfeeding can be, it's not always as easy as you may think.

After having my first baby, it took three whole days for my milk to come in. There is nothing like having a screaming, starving newborn to make you feel inadequate. I cried because I was stressed out. I cried because I was tired. I cried because I felt like a failure that I couldn't even feed my own child. And I cried because my nipples hurt. Oh man did they hurt. Nobody tells you how badly breastfeeding can hurt in the beginning. We didn't have any latch problems or tongue-/lip-tie problems, either. It just takes a little while to toughen those suckers up.

Related:
Dear Breastfeeding Moms, Is It Really That Hard to Cover Up?

Thankfully, though, after a couple of weeks, breastfeeding was a breeze for us. I didn't have any other issues, and I was able to breastfeed my daughter until she was 18 months old. And then I got pregnant.

When my son was born, I figured we would be able to get the hang of things pretty easily. He latched on without any problems, and the first day went OK. But then that familiar soreness came back. It hurt like hell. Every time he latched, I cried. My nipples were so cracked and sore, they were literally bleeding through my shirt. At my husband's suggestion, we started giving him formula so I could just give myself a break. I pumped for a few days and I used that amazing compounding cream you might have heard about, and that combination really helped. I was able to begin nursing again, and it wasn't as painful anymore. I figured it would be smooth sailing from then on like with my daughter, but boy was I wrong.

"I had a rock-hard, golf ball-size lump on my breast. It was hot to the touch, so it was definitely infected."

My issues began with a clogged duct. I did everything anyone suggested. Epsom-salt soaks, hot compresses, nursing in awkward positions, using a massager, massaging with my hands, sunflower lecithin, essential oils . . . nothing would unclog this duct. After a week of trying, I finally developed mastitis and had a fever and chills. I called my family doctor and went on antibiotics, but after taking the dose, the problem didn't go away. I went to my OB, and they suggested a second round of antibiotics, but the problem still didn't go away.

I was so uncomfortable. I had a rock-hard, golf ball-size lump on my breast. It was hot to the touch, so it was definitely infected. I didn't know what to do or where to go for advice. I felt like my doctors were being too casual, and I was desperate for relief. I posted on a breastfeeding Facebook group (thank God for Facebook support groups!), and a few helpful women commented that they had had this problem and they got the lump drained by a breast surgeon. I immediately called my OB and said I wanted to go see a breast surgeon. They made me an appointment, and I went the next day. 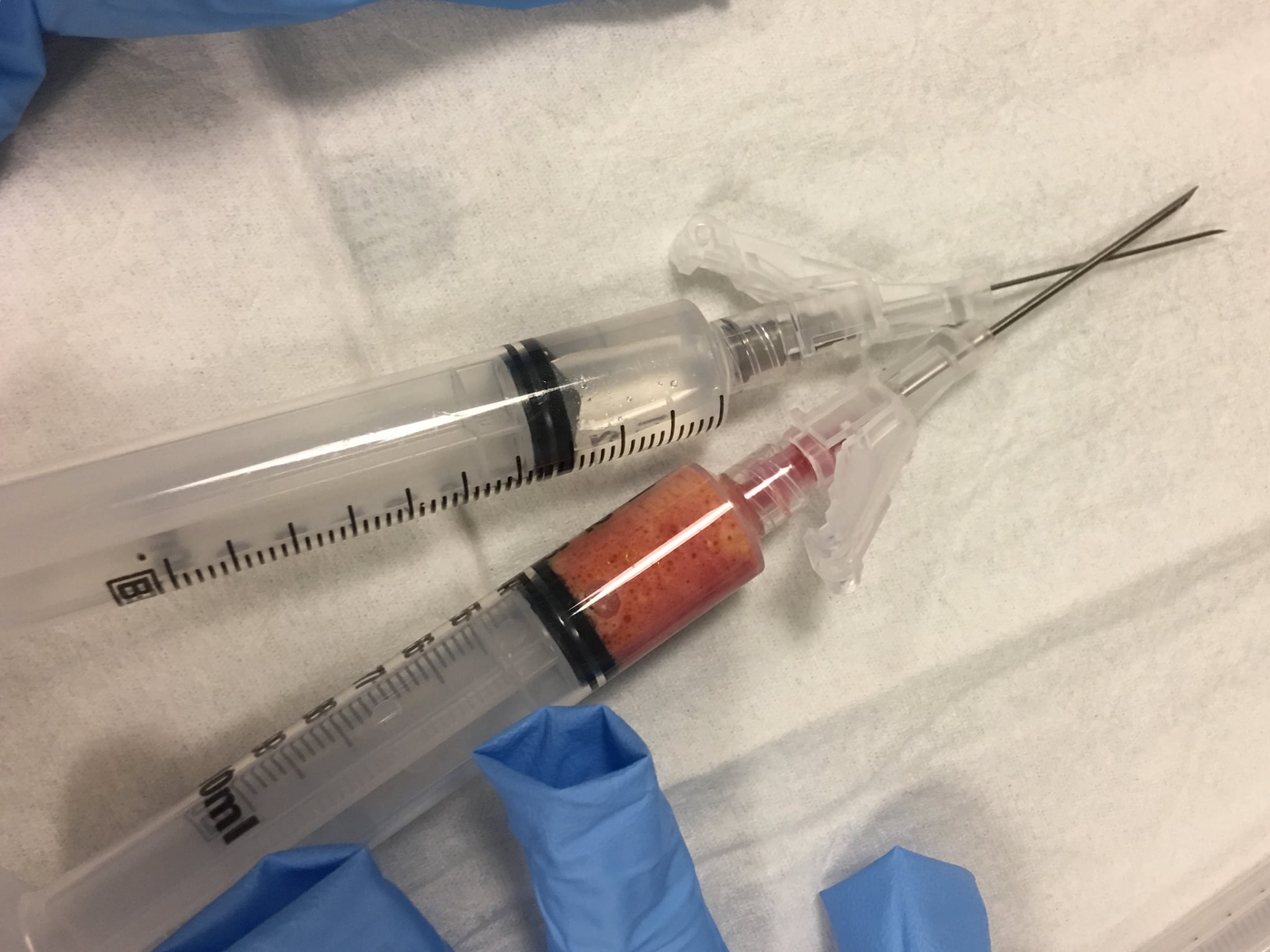 They did an ultrasound of the lump to see if it was an abscess, which would warrant getting it drained, and indeed it was. They gave me the option to have the procedure done that day, which I gladly accepted. To drain it, they inject a numbing medication directly into the lump and then use a syringe to remove as much of the fluid as they can. I watched, nauseated, as the doctor inserted a long needle into my breast and filled two whole syringes with puss. It was over quickly, but the doctor warned me that sometimes people need to have the abscess drained multiple times or, worst-case scenario, have a stint put in so that it can drain constantly, which could cause issues with my milk supply . . . if I was lucky enough to even still nurse on that side.

"I encourage you to speak up. Share your war stories with other moms. You never know who you might be helping."

After a couple of days, the lump was back. I called my OB again, and this time they sent me to a breast surgeon at a cancer center because she had more experience with these issues than the doctors at the outpatient center I had gone to before. Walking into a cancer center, even when you know you don't have cancer, gives you an immediate feeling of anxiety. They did another ultrasound, injected the numbing solution, and removed the fluid. After this trip, I had to sit in my car for a little while because I felt so lightheaded.

I had to go back to the cancer center seven more times to have my breast drained. The doctor was really wonderful. She said she could have done the more invasive stint procedure and it would have drained sooner, but by doing a third round of antibiotics and draining it weekly, it allowed me to continue nursing and had no negative effects on my supply. She also got me in touch with a breastfeeding specialist, who speculated that this all stemmed from the first couple of days when my nipples were cracked and bacteria likely entered my body.

Related:
This Mom's "Poem" About Public Breastfeeding Is Even Better Than Her Photo

My son is now 5 months old, and I somehow managed to continue nursing him throughout all of that. It was an almost 10-week battle, cost me over $600 out of pocket, and permanently discolored my breast. It is not an ordeal I wish on anyone, and I am sharing this because I think it's important for women to talk about the good and the bad ordeals that come along with breastfeeding. I had no idea what to do to help myself or what the problem even was. If it weren't for the women in the Facebook group, I wouldn't have known a breast abscess was even a thing. So I encourage you to speak up. Share your war stories with other moms. You never know who you might be helping.

by Joely Chilcott 55 minutes ago