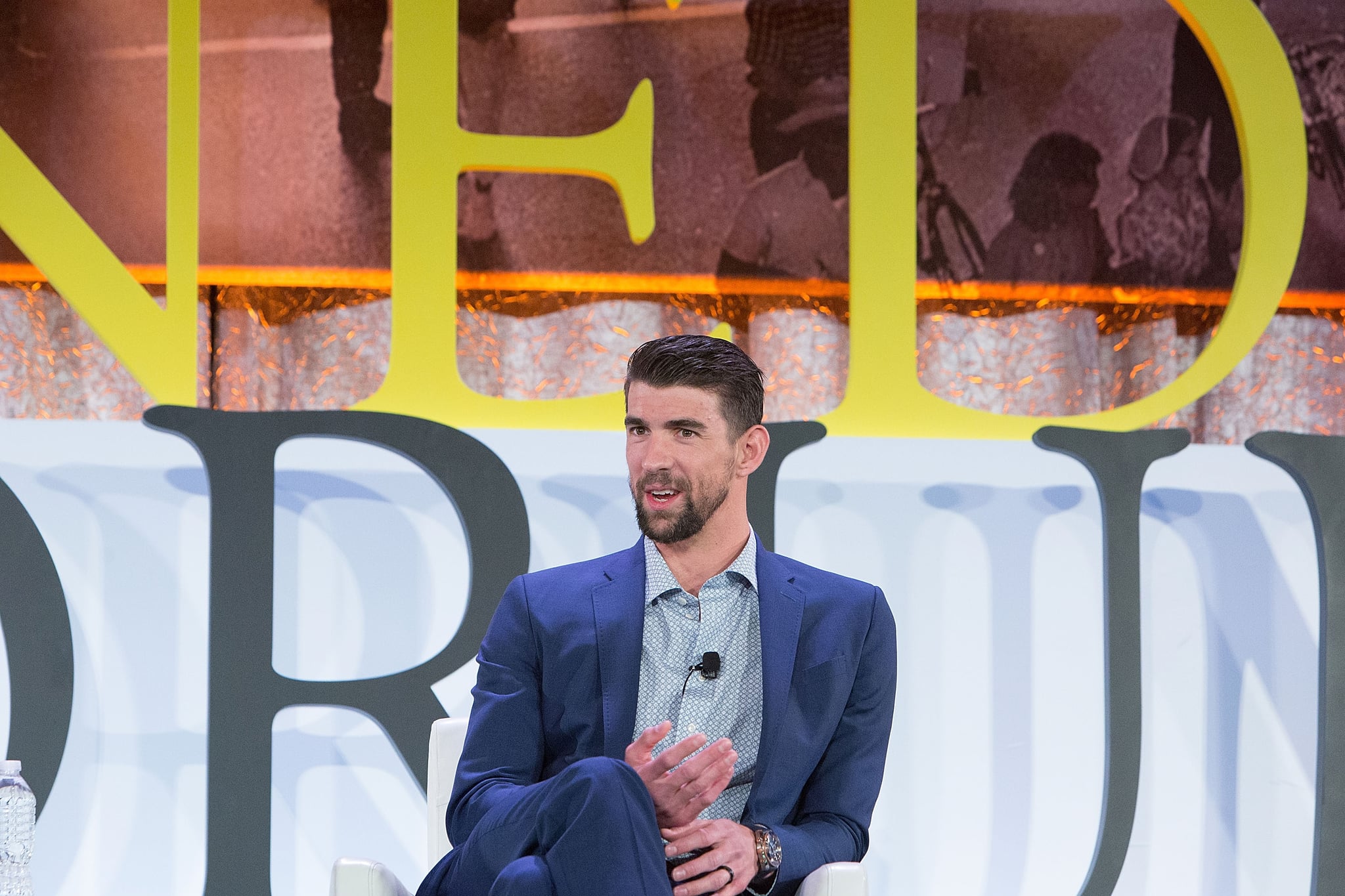 If there was any question about Michael Phelps competing in the Tokyo 2020 Summer Games, that question was put to rest on Thursday when the most decorated athlete in Olympic history told a crowd of mental health experts: "I don't see myself ever competing again in the water. I don't want to, because I love what I'm doing now."

The project he's referring to is destigmatizing mental health treatment, especially for teens. Although Phelps was seemingly at the top of the world in October 2014 with 18 gold medals to his name, he was actually spiraling into a deep mental health crisis, culminating in a DUI arrest that led to a stint in rehab and contemplation of suicide. He spent the first days of rehab seated with his back to everyone in the room, staring at a brick wall, but eventually realized that it was OK to ask for help.

"I think for so long, I had a fear of rejection because of what I went through with my father," Phelps told POPSUGAR. "I was let down a lot with things he did with me as a kid, and I didn't want to feel that anymore. So I was afraid to ask for help. And then I got to where my life was at the lowest point ever, and that's where I had to either ask for help or I wasn't going to be here."

It's that moment that led Phelps to where he is today, serving as the spokesman for Talkspace, the online therapy platform that he actually uses to work his way through his continued mental health struggles. At the conference, Phelps helped the company announce that it will now be providing its services to teens between the ages of 13 and 17 (previously the platform was only available for adults ages 18 and older). He's also working to incorporate a mental health component to his foundation, the IM Program, which has a mission to grow the sport of swimming and promote healthier lifestyles.

"I was afraid to ask for help. And then I got to where my life was at the lowest point ever, and that's where I had to either ask for help or I wasn't going to be here."

Now the father of two, Boomer, 2, and Beckett, 8 months, Phelps is already working on opening up the conversation of feelings with his young sons. When Boomer has a temper tantrum, as most toddlers do, Phelps and his wife, Nicole, coach him through it. "If he doesn't get his way and basically drops to the floor for no reason and comes running over to me, or to mom, and we get down to him, and we're like: 'If you want something, you're going to have to take a deep breath, and you're going to have to relax. You have to calm yourself down, and then we can have a discussion.'" Then they tell him to take lion's breaths, imagining he's a little lion taking big, deep breaths to calm himself down. It's a tactic Phelps uses for himself, too, noting that on the way to NYC for the conference, Nicole texted him to remind him to take lion's breaths when he grew frustrated with his seat mate.

"We're trying to get him to communicate as much as he can the message that he wants to get across or why he's frustrated," Phelps explained. "I wish I would have had that as a kid, to have a list of eight basic emotions on the wall where somebody can walk in and say, what are you feeling, and I could point and say, that's what I'm feeling, and this is why. Then I could have a better understanding of what I'm feeling, and potentially work toward not overreacting. I'm excited for him to get to the point where I can explain things that I went through and that I struggled with."

In terms of the focus on teens, it's a topic that Phelps is extremely familiar with and nervous about given the state of the world today. "For me, growing up as a kid with ADHD, I was always getting made fun of for wearing a little small suit and shaving my legs, or my big ears, or this or that. I was picked on all the time growing up," Phelps says. "I think the biggest thing now with the world that we live in [is] social media; it's so hard."

According to the National Institute of Mental Health, one in five children has or will develop a serious mental illness as a teen.

The issue of adolescence mental health is a topical one. According to the National Institute of Mental Health, one in five children has or will develop a serious mental illness as a teen. It's something that Phelps knows all too well. "The biggest thing that I went through as a kid was the stuff I went through with my dad," he explained. "Having five years, 20 years, where I can probably count on one hand that I talked to him or I saw him. For me that was hard to carry. As a dad now, I want to be able to give my sons everything possible and teach them everything I can possibly teach them. For me, I don't know what the appropriate age is, but if you need help, I don't think it matters what age you are."

But with the right tools, kids can start to tackle the issues. Phelps shared the story of a little boy named William that they work with in Knoxville. After the boy's father was murdered, he was struggling in school and joined the IM Program. Though he didn't learn to swim his first or second years in the program, the third year, he did. "Through all of that, he was able to learn and grow," Phelps shared. "Now he's helpful around the house. He's so much better in school. He's going to college. There's so many things he's been able to learn and grow from. It's cool to really see a kid make a quick 180 and understand everything. That's something I'm going to continue."

For Phelps, a lot of it has to do with removing the stigma associated with seeking help and helping teens realize that "some things that you don't want to do are good for you." That's how he felt about therapy. But after a while, he was "eager to see what emotions [he] had and where they were coming from." He believes he never really thought about these emotions because he was so busy, quite literally "immersed in water." And it took a while for him to be able to say, "I am who I am and sorry if you don't like it. I don't care! It's not my problem."

It's this comfort in his new being that is motivating the next phase of his public persona. "I want to give myself the best chance that I can to grow and to learn and to teach others," Phelps shares. "For me, I had a great career. I had a fun career. I don't know when I'll understand it, if I'll ever understand it, but just to be able to understand what I went through and to now kind of watch where things are going, this is something we have to get on top of, and we have to change."