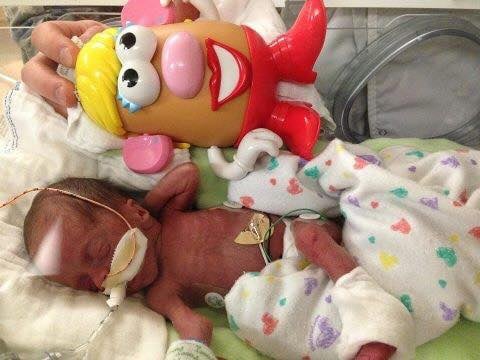 After giving birth to their twin daughters, Dylan and Hayden, at just 23 weeks gestation, Kristin Moan and her husband Eric were desperate to help their micro-preemie babies find a source of comfort during their long road to recovery in the NICU. Fortunately the couple — who were understandably racked with anxiety — found the perfect companions for their growing girls: Mr. Potato Head dolls.

"I found out after I delivered our girls that they were born because of a placental abruption," Kristin told POPSUGAR. "I had no idea I was actually in labor, I was just in a lot of pain. We ended up going to the ER around 8:15 p.m. and within two hours they were born, and each headed in their own ambulance to the nearest high-level NICU and I was told I wouldn't see them until the next day."

Related:
This Man Has Held Preemies at the NICU For 12 Years and Proves Grandparents Are the Best

For any worried parent, the NICU can be a truly scary place, especially in the first few weeks of your baby's life. And with two babies in the NICU, the Moans were no exception to the norm. "There are no perfect words to describe the NICU, but it was immediately filled with lows," explained Kristin. "Low chances of survival, little conversation on anything past that hour even as the hours went on throughout the day. I have never been so afraid in my life. There is nothing that can prepare you for a day, let alone four months in the NICU."

Thankfully, Kristin and Eric found help in one of the most unlikely places, the toy isle of a local store. "When our nurses told us some people get stuffed animals to take photos with their kiddos, Eric went out and in turn bought the Mr. Potato Heads because they can be wiped down and sanitized. It was a genius idea." The pair started including the dolls in the photos with their girls to show friends and family how much their daughters were improving everyday.

Despite having a severe brain bleed, Hayden finally came home after 109 long days and Dylan was released at the 119-day mark, which included a panicked middle-of-the-night call asking the family to come say their goodbyes just months before. Hayden and Dylan have been out of the NICU for nearly five years, but that doesn't mean the Moans have forgotten about the months they spent there. They decided to give back by starting the Potato Head Project, which brings hope to other families who have babies in the NICU by giving them their own doll.

"Any child is a miracle, but a micro-preemie is extraordinary. A true testament of a warrior. They come out and fight the minute they are born."