Six times. It happened six times that I thought I was going to lose my barely 5-month-old daughter. The first time was the very first day I went back to work, and her first day of daycare. My husband picked Sadie up at the end of the day and I immediately held her on the couch and nursed, a tear starting to form in my eye as I realized how much I missed feeling her sweet, warm self all day. Then she stopped nursing, her body arched, and she started shaking. "She's having a seizure, " I yelled, "Call 911!" The paramedics rushed inside in a matter of minutes, to see my daughter just passed out in my arms, still breathing. We had to take her to the hospital for testing. I rode in the back of the ambulance with her while she slept in her carseat, my husband following behind in the car. I was sobbing, feeling helpless, wondering if this was going to be the last time I saw her alive. 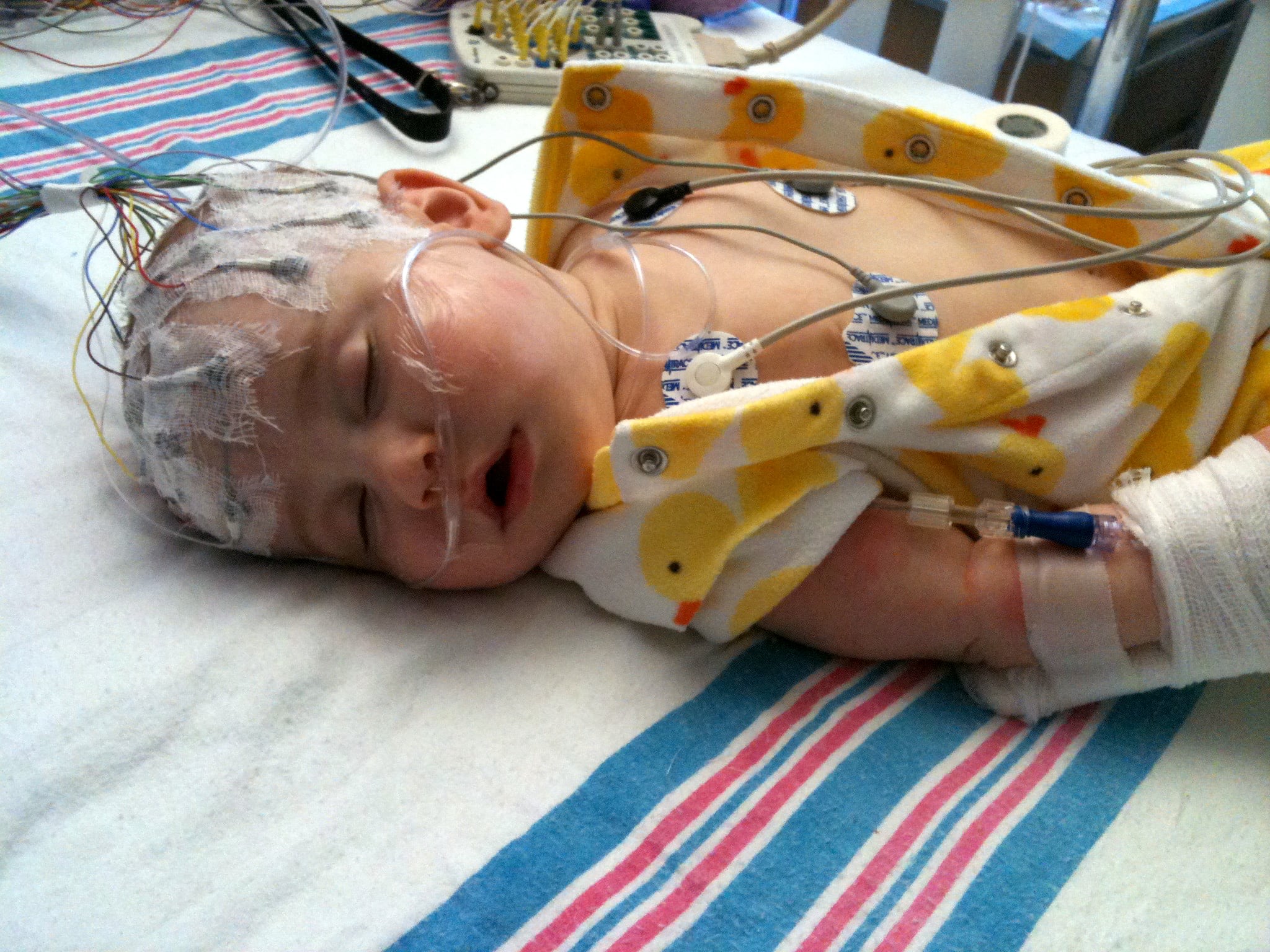 She ended up getting a bunch of tests, which all came back negative, so they sent us home. But then the next morning while holding her, I noticed she started to lose all emotion in her face, her lips turned blue, and she wasn't breathing. As quickly as life seeped out of her, it crept back in, and I heard her breathing. Crying, holding her tight, I couldn't believe how calm I was, but it hit me that this was serious. We drove straight to the ER. In the waiting room, it happened again. Blank stare, blue lips, no movements. The nurses brought us right into a room and put an oxygen mask on her tiny face. I held my face in my palms, sobbing, saying, "What's happening? Is she going to be OK?"

They immediately admitted us onto Baird 5, the children's floor at the hospital. Looking around at all the other sick kids and their families, I felt a sense of connectedness and deep sadness. You always hear about kids fighting illness, and now mine was one of them. The only time I left her side was to use the bathroom. I wanted to spend every minute possible with her, because I didn't know how many more minutes I had left. I even slept with her in that tiny hospital crib. Somehow I felt that if she knew I was there, she wouldn't let go.

In the morning, my husband got a call from our neighbor, who was watching our dog, and said he was pooping blood. Mike didn't want to, but he had to leave and take care of our first baby, Reuben. Seeing us all leave in the ambulance was definitely traumatizing to him. That's when the absolute worst moment of my life happened. I was standing by Sadie's bedside, holding her little hand, singing, "You Are My Sunshine," when the monitors started beeping. Her oxygen levels were plummeting and I pushed the emergency button. Within two seconds, eight people rushed in, pushing me aside, and I just watched as they put an oxygen mask on her face, her tiny body arching up. "Please don't die, please don't die, please don't die," I kept saying over and over again, tears streaming down my face, wondering if this was going to be my final memory of her. Miraculously, she started breathing, and one by one, everyone left except one nurse who quietly hugged me while I lost it.

I called Mike crying, and kept saying "she almost died." He left our dog with the vet, who reassured Mike, "I'll take care of him as if he were my own," and Mike shot back to the hospital, where we were transferred to the PICU (pediatric intensive care unit). She was wearing her duck fleece sleeper (which I've since saved), the arm cut in order to put in a tiny IV. They did so many tests on her, and the whole time, she was all smiles, the sweetest energy pouring out of her cute face. I watched them attach wires to her head to monitor her brain waves (EEG), and be put under anesthesia twice for an MRI and a spinal tap. Every test came back negative, but the neurologist said, "epilepsy," and they put her on a medication called Keppra.

We wanted a second opinion, thinking maybe they missed something. So we transferred to another hospital via ambulance, just in case she needed to be revived. They put more wires on her head, did tests on her heart (EKG), and also recommended we do a barium swallow test to test for reflux. That came back positive, and the doctor put her on Zantac, thinking the acid was coming up and cutting off her air supply. What a relief, we thought, that we figured out what was wrong, and to be back home after two weeks in the hospital.

Only, later, we found out that wasn't at all the case. Her "turning blue episodes" kept on happening, but this time, she started having the same shaking seizures we saw that first day. So it was back to the hospital again for another week. Another spinal tap, another EEG, and this time it showed slight abnormality, so we switched to a drug called Phenobarbital, and were sent home with our own oxygen tank and an oxygen monitor that attached to her toe (she still has a scar from it). Every time her heart rate slowed, it would beep. One time she stopped breathing and we rushed in and I had to use the oxygen, her pale blue face and lifeless eyes etched in my memory forever. We met with two other pediatric neurologists, one in Boston, and all said the same thing: keep her on meds and she'll probably outgrow this, as most babies do.

The medication worked, and I was so grateful, but I was also so angry at the same time. I looked with jealousy at other moms at the local playgroups, at the library, on the playground, wishing my biggest worry was that my kid was constantly leaking out of their diaper, or they were up all night teething. The thing is, I had to deal with all that normal baby stuff on top of the unimaginable worry of losing my baby girl, and that feeling never left me. I feared the medication was causing developmental delays. It was hard not to compare her to other babies — Sadie was just beginning to crawl when some of her peers were starting to walk, and she didn't take her first steps until she was 18 months old. I kept thinking ahead to swimming, riding a bike, reading, driving a car, being a mother — would she ever be able to do these things?

I also had such a deep connection to Sadie, and the thought of not being with her pained me. Friends and relatives were always urging me to go to a yoga class, go for a trail run, or go on a date with Mike, but no one understood that I didn't ever feel like I needed a break from her. What I needed was more time together, as much as I could get. They would say that I babied her, and I did, 100 percent. But you would too if you watched your child almost die right in front of you.

Sadie was on meds until she was 16 months old, then we slowly weaned her off. She was off meds and seizure-free for six weeks, and the day after our neurologist appointment, when the doctor said, "looks like she's already outgrown this," Sadie had another seizure, and it was back to the hospital for yet another EEG, and she was put on a new medication, Lamictal. This was about the time that I found out I was pregnant with our son, and all I kept thinking was, "Will this happen to him, too?"

After two years seizure-free on meds, right before she turned four, I had huge anxiety about weaning her off. But as of May 20, 2012, she has been completely seizure-free. And our son has been totally healthy with no signs of seizures whatsoever. Now, at five years old, I almost feel like this nightmare is behind us. And as traumatic and life-changing as it was, one good thing has come out of it. I almost feel like I've gotten a second chance, a wake-up call, or what might be a message from my elderly self, which is to appreciate and celebrate every moment together. I spend more time creating memories, doing what makes us happy, and less time worrying about what could have been. Every time I look into either of my children's bright eyes, I'm reminded that this life is meant for living. I feel grateful every day, for what we have, and know that the love I had for Sadie and our family is what gave me strength to get through, and with that love, I can tackle anything.

Healthy Living
This 1-Minute Higher-Protein Almond Milk Recipe Has No Sugar, No Straining, and No Pulp!
by Jenny Sugar 1 day ago