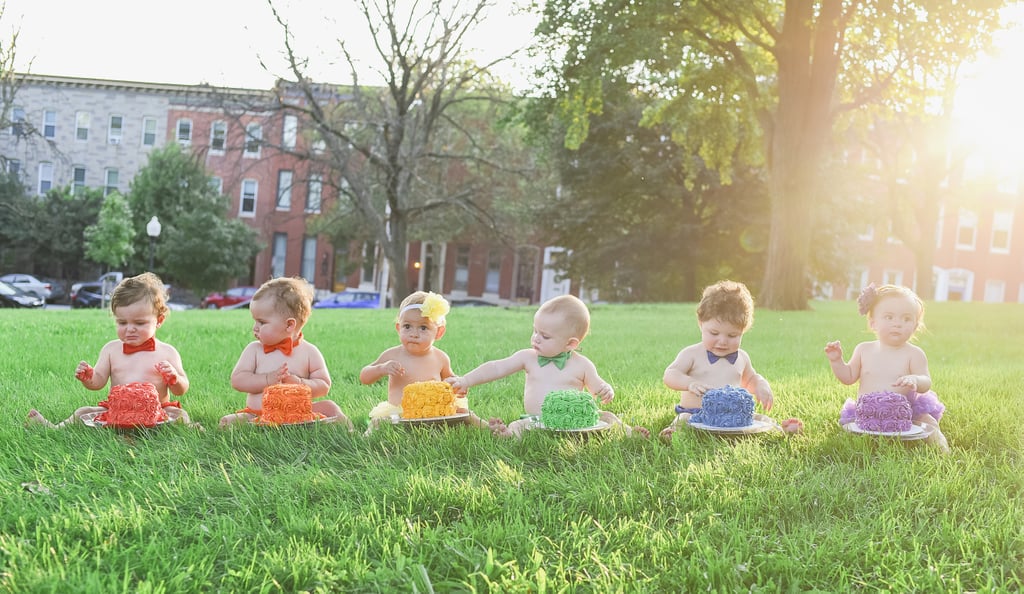 When Alicia Lewis, a mom of two from Baltimore, signed up for a prenatal fitness class, she had no idea that she would become friends with five soon-to-be moms who would help her navigate one of the most difficult things she's ever experienced: inexplicably giving birth to a stillborn son, Frankie. After getting pregnant again with her daughter, Alicia learned that some of the other women in her new friend group had also suffered the loss of a child, and the shared experience only strengthened their bond.

So as soon as Alicia gave birth to a healthy daughter named Charlie in August 2017, she knew she already had a support system — all five of her friends gave birth within the same month. To celebrate her beautiful rainbow baby, Alicia invited her friends to do a rainbow-themed cake smash with photographer Jessica Carr, and it's safe to say the pictures are amazing.

"Our second child is our rainbow baby as we had a late-term pregnancy loss in between our boys, so this was also personal and emotional for me," Jessica said. "It was so heartwarming to see all these mommas being such close friends and learning how they supported Alicia through her pregnancy with Charlie. They didn't shy away after knowing her story. That's the number one thing you worry about after an infant loss, is that you'll share with others and they'll be freaked out or uncomfortable."

Although the pictures turned out perfectly, Jessica admitted she was a little intimidated about having a shoot with six little ones.

"I was definitely a little apprehensive at first," Jess said, adding, "But the moms were great at keeping in mind we had six babies and six personalities in play, and luckily we were able to get a great amount of shots before the first meltdown."

Scroll through to see all the beautiful photos, and try not to squeal in the process.

Steph Curry
See Steph Curry's Baby "Work Out" in Their Home Gym: "Questionable Form but We Will Take It"
by Chanel Vargas 3 days ago

Celebrity Instagrams
Shawn Johnson's Husband Got a Haircut, and Their Baby Girl's Reaction Has Me Smiling So Big
by Chanel Vargas 4 days ago