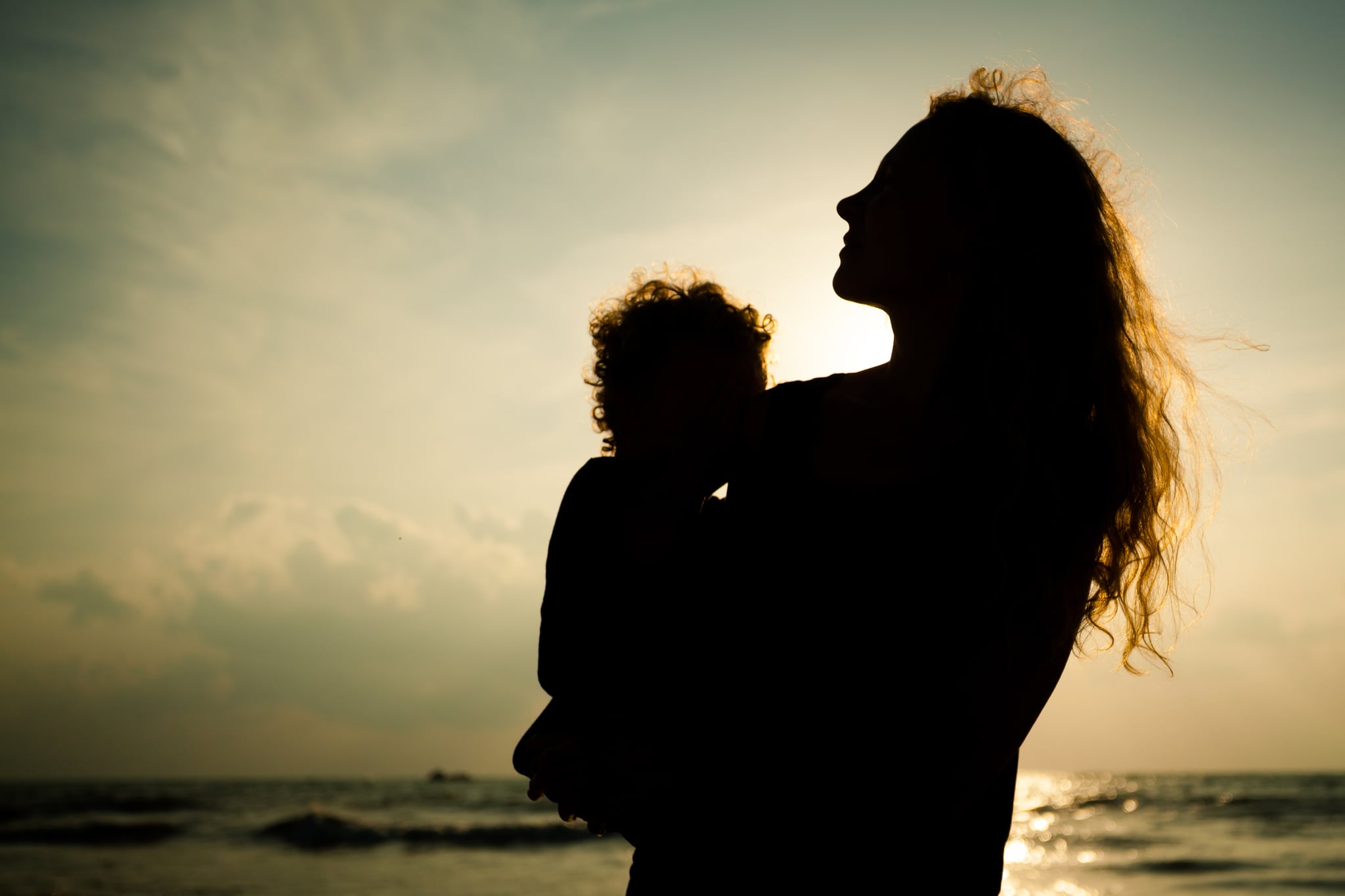 Months after leaving my daughter's father, I confessed to him that I was having a hard time adjusting to being a single mom. I was having a hard time with my four-hour daily — an hour on the bus across the Bronx to Upper Manhattan to drop her off with my grandmother, then an hour on the train to get to work, then the reverse in the evenings — five, sometimes six days a week. Then I had to feed my little girl, bathe her, read to her, and coddle her. By the time I put her down for the night, I was utterly exhausted but still had to bathe and get myself ready for the next day. I had to read, and I had to write. I am a writer, after all.

His response went something like, "Give me custody. I'll take her." As if that was what I was saying.

That was my entry into the shame imposed on us single moms. We can't say it's hard. We can't cry over the pressure. We are supposed to grin and bear it. It's no wonder so many snap, so many are depressed, so many take this pent-up rage and resentment out on their kids. I'm not saying it's right. I'm saying I understand, carajo.

When my girl was 3, I started working for a nonprofit in the South Bronx. I worked five days a week, and my commute was four hours a day. I remember once talking to my co-workers about how hard it was. One of the women in my office had also raised her now-adult children alone, and the boss, a man, had been raised by a single mother, as had the head college advisor, so I thought I was in the company of people with whom I could commiserate, who would understand why I felt so overwhelmed. I wasn't looking for pity. I wanted — needed — to hear, "Me too." I wanted to hear how they'd survived it, how they'd made do.

The older woman later said, "Don't say that in front of bossman." She said his mother had raised three kids on her own and had never complained. She'd been a strong black woman who'd held it down by herself, raising her kids in a notoriously violent housing project in the North Bronx, so if she could do it, so could I. I was expected to mother my daughter alone in silence. Not doing so proved that I was weak.

My mind goes to an essay I read earlier this year, "Writing the Wrongs of Identity" by Meri Nana-Ama Danquah, published in Unholy Ghost: Writers on Depression:

In these lies [of history] black women are strong. Strong enough to work two jobs while single-handedly raising twice as many children. Black women can cook, they can clean, they can sew, they can type, they can sweep, they can scrub, they can mop, and they can pray. . . . [B]lack women are always doing. They are always servicing everyone's needs, except their own. Their doing is what defines their being. And this is supposed to be wellness?

I imagine how many times so many of us have stuffed pillows in our mouths and screamed loud and cried hard because we're so desperate and alone and feel so broken, but we can't let anyone hear us because doing so means we are weak and incapable and self-absorbed.

Following the recent publication of my essay "I Understand Why Some Women Stay," published by xoJane, a commenter told me I wasn't a single parent. I'm a co-parent, she insisted. My daughter needs her dad, and I shouldn't use my daughter as a chess piece in my war with her dad. This person even left a link to the child support and custody bureau. (Yes, I know I should stay away from the comments. Obviously, I could not resist.)

To be clear, my baby daddy never put his hands on our daughter. He was violent with me, but he was (and still is) very tender with her. No one is all of one thing. I've never felt like my daughter is in danger with him. When we broke up, I never denied him visitation, and he's always paid child support. We came to an arrangement together without going through the courts.

So, yes, he is present, but, no, we do not co-parent. "Co-parent" is a verb. By definition, to co-parent is to share the duties of parenting a child.

I am a single mother. I am the one who takes her to her doctor's appointments. I'm the one there on the first day of school. I go to the parent-teacher conferences and back-to-school nights. I take her to dance class and get her ready for recitals. Last year, when my baby girl cut herself deep while cutting a bagel, I'm the one who held her and cried with her, wrapped up her finger, and took her to the ER. I'm the one who knows how she likes her frozen yogurt (with tons of sour gummy worms and a few chunks of mango). I know that her favorite meal is my spinach linguine with sun-ripened tomato Alfredo sauce and chicken. I taught her to ride a bike. I take her to the park to howl at the full moon and have woken her up in the middle of the night to witness a lunar eclipse. "Mommy, it looks like a ball of red clay," she said. She was 5 years old. I've done all these things alone. I am a single parent. I live this life. It is mine.

My baby girl turned 10 in August. A month ago, while I was sitting on the Low Library steps of my alma mater, Columbia University, mulling and feeling nostalgic, my phone rang. It was my daughter's school. I heard my little girl's voice, in almost a whisper, say, "Mommy, I got my period." (Note: I read this portion to my daughter and asked if I could include it in my essay. She gave me permission. Bless her heart.)

She knew what to do. I'd drawn a diagram of ovaries and the uterus on unlined paper. Shown her diagrams on the net of her reproductive system. Told her what menstruation is, why we get it, how it's part of every woman's life. She was mortified at the idea of getting it at her dad's house. Her big brown eyes got even bigger when the thought hit her: "Oh, my God, Mom, what if I get it at Papi's?"

"You go to the nurse, then you call me."

I thought I had more time.

I think back to when I got my period when I was 10. I woke up to blood on my mint-green shorts. I was the first one up. I knew what it was, though no one had really talked to me about it. I put the pad on wrong, with the adhesive side facing me and not the panty, like it's supposed to. I didn't discover this until I went to the bathroom and pulled down my underwear. I think they heard my scream on the other side of Brooklyn.

My girl's 10th birthday hit me hard. She had a huge growth spurt this Summer. She's wearing women's sizes now. She fits into my shoes. When I look at her, I don't have to look down anymore. (Yes, at 5 foot 2, I'm a shorty myself, but still, she's 10!) She's curvy like her mama. I've seen men's eyes linger on her.

Recently, an old man of at least 60 threw kisses at her and said, "Tú sí estás linda, nena." I pulled her to me and demanded, "¿A quién tú le dices eso?" His face fell when he saw me. He insisted it wasn't to her. I was going crazy, he said.

I wanted to claw him. Instead I crossed the street with my girl.

I cannot protect her from this or from so much else, and that sh*t is hard to come to grips with. I have no partner present to help me navigate this. Yes, I have a village that helps out, but in the day to day, it's just my girl and I.

I watch my girl and I think about how lost I was as a girl because of the antagonistic relationship I had with my mother. I had to become a woman alone, through trial and error. I did it. I don't know how. I'm still adding up the repercussions of that. I'm still picking up the pieces.

"You can be bold and still be broken."
— Roxane Gay during a talk at Book Forum during the Brooklyn Book Festival

I am terrified of failing my girl. This terror is like white-knuckled hands tightly gripping my neck. Some days I am more terrified than others. I don't want to be scared, but I am. It's fear that's fueling this essay.

After my girl told me the news, I hung up and cried. I fretted over how I'm going to raise this girl in this world that sometimes feels like it's so hell-bent on breaking us. I imagine a horse being broken in. The violence of it.

I walked to Broadway and compiled a care package for my nena, complete with pads, painkillers, and a little bag to carry in her book bag so that she doesn't have to put her business on display when she goes to the bathroom. I bought her chocolate and a card with a note from her mama reminding her how much I love her and how proud I am of her. I wrote, "Don't grow up too fast!"

I'm planning a red dinner for her. Women in our village will wear red, eat red velvet cake and red beans, and share stories of our first times. We will commemorate this rite of passage with my girl. We will celebrate womanhood, because such things need to be celebrated.

I will remember how hard it is to be a single mom, and though it's so very isolating sometimes, when it's most needed, the village gets together and reminds us that we have support, that we have love, that we are not alone.

Kamala Harris
As a Mom, Having Another Mom in the White House Means So Much
by Jacqueline Hernandez Lewis 3 days ago

Hilary Duff
Seeing Hilary Duff Handle Her Third Pregnancy So Well Makes Me Think I Can Do It, Too
by Sydni Ellis 5 days ago