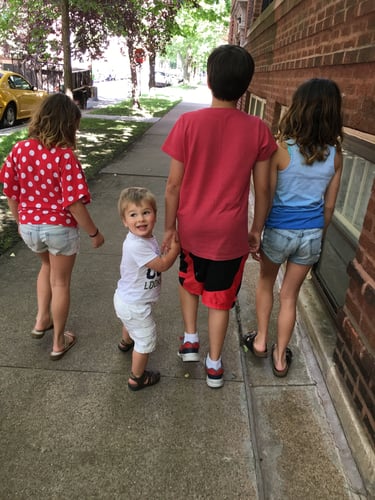 My husband and I have one child, a 2-year old son who is as kind as he is rambunctious. Despite the insistence of family members, acquaintances, and waitresses at roadside diners, we're planning on keeping our family limited to three. While part of me would love another child, it just doesn't feel right for our family unit.

Still, there's a strong desire for a large brood of kids running around. Being raised in a small family where I was an only child, part of me can see the joy of having a very full household. Sometimes I wonder if those strangers are right and I should have a larger family.

Related:
Don't Make Me Feel Bad For Having an Only Child

Recently, trying to provide a little relief for my aunts and a little entertainment for myself, my husband and I babysat his cousins. Three children, two the age of 11 and one 8-year-old — and they gave my active toddler a run for his money. My brief time as a caregiver to four children taught me more than I expected about parenting.

For the longest time I felt like it was totally reasonable for complete strangers to voice their opinion on how many children I should have. After all, I was being the weird one by only wanting one. Of course this person whose name I don't know should get to tell me to have more.

Related:
Why Saying "Just One Kid" to a Mom With an Only Child Is a Hideous Crime

For the longest time I felt like it was totally reasonable for complete strangers to voice their opinion on how many children I should have.

Suddenly, it felt like as often as I was being told to have more kids, I was being given judgmental glances as we walked around the neighborhood. I could see people's eyes dart from child to child and then to me, finishing with a disgusted eye-roll. Maybe I was just really stinky that day, but what it seemed like was when people say that, "I have to have more kids," what they really mean is no more than two, maybe three, but dear God, not four.

Even a woman whom I have interacted with on several occasions and has three kids herself saw me and with a raised eyebrow and hint of stink-eye asked, "Are these all yours?" Thankfully the children were model citizens because otherwise I would have gotten even more glares.

Related:
13 Reasons You Need to Give Your Child a Sibling

It's clear to me now that no decision is right for everyone, but it's really easy for everyone to have an opinion. To many people I'm selfish for only wanting one baby, and for a short while I was apparently even more selfish for having four. With there being such a limited correct number of children, it's impossible for any parent to do what's right for everyone.

I'm happy with my one baby and maybe someday we will decide to have another. If we do, it's not going to be because of what a stranger wants or thinks I should do.