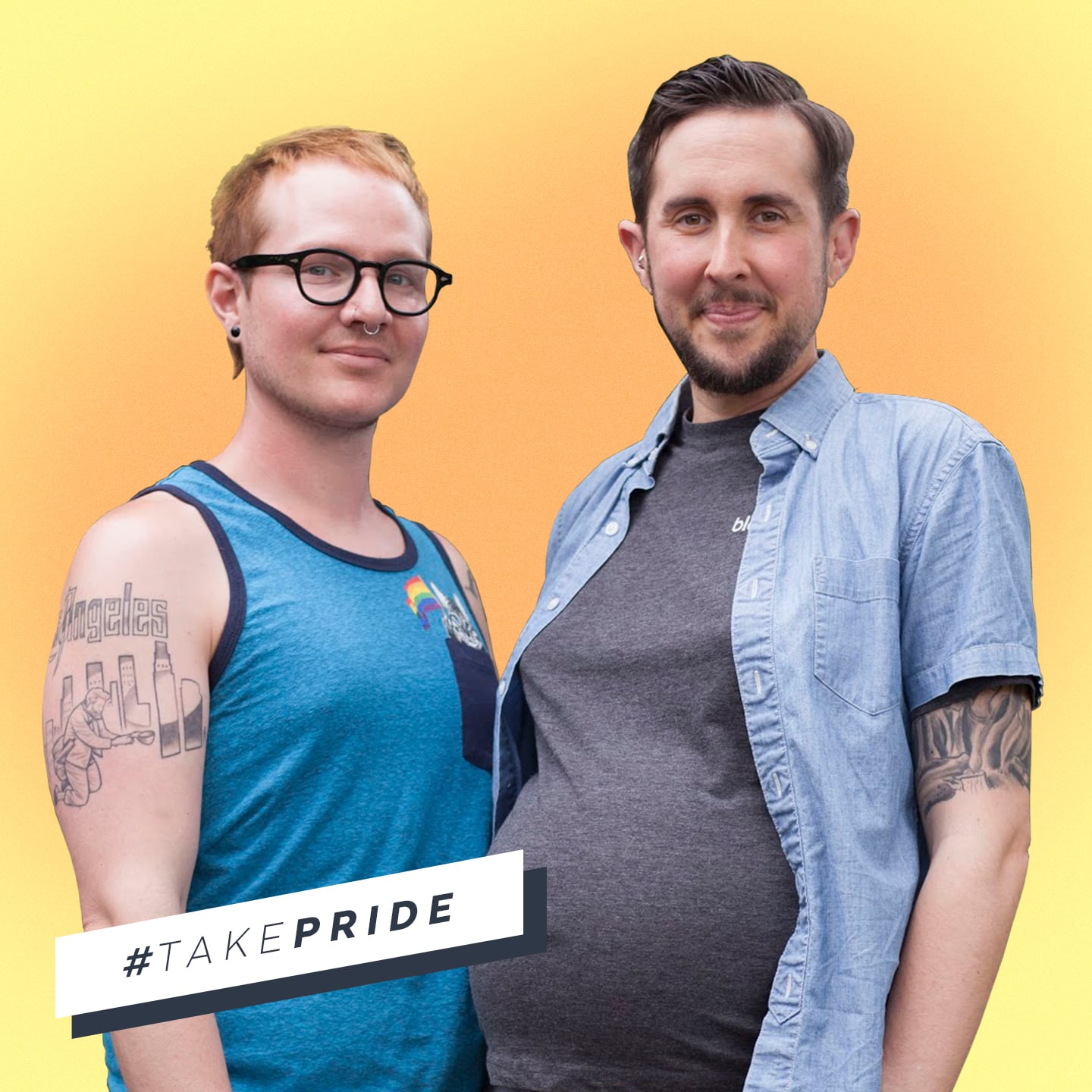 For Biff Chaplow and Trystan Reese, becoming parents was a lot like coming out.

"It's a slow process — and you kind of know it's coming," Chaplow explains to POPSUGAR. "You get to a point, usually long after it happens, where you realize, 'I am a parent.'"

Reese agrees. "It's similar in that there's a lot of self-doubt," he says. "Is this the right path for us? Am I going to be happy on this path? I kept expecting people to say, 'What? You can't be parents!' And all we got was support."

While this call to parenting may sound atypical in how unpredictable it was, that's because it truly was: Chaplow and Reese — a cisgender gay man and transgender gay man, respectively — had only been dating for a year before they adopted Chaplow's sister's children to protect them from entering the foster system. Riley was 3 years old and Hailey was 1 year old at the time — they are now 10 and 7 — and once the papers were signed, Chaplow and Reese famously became "accidental gay parents." 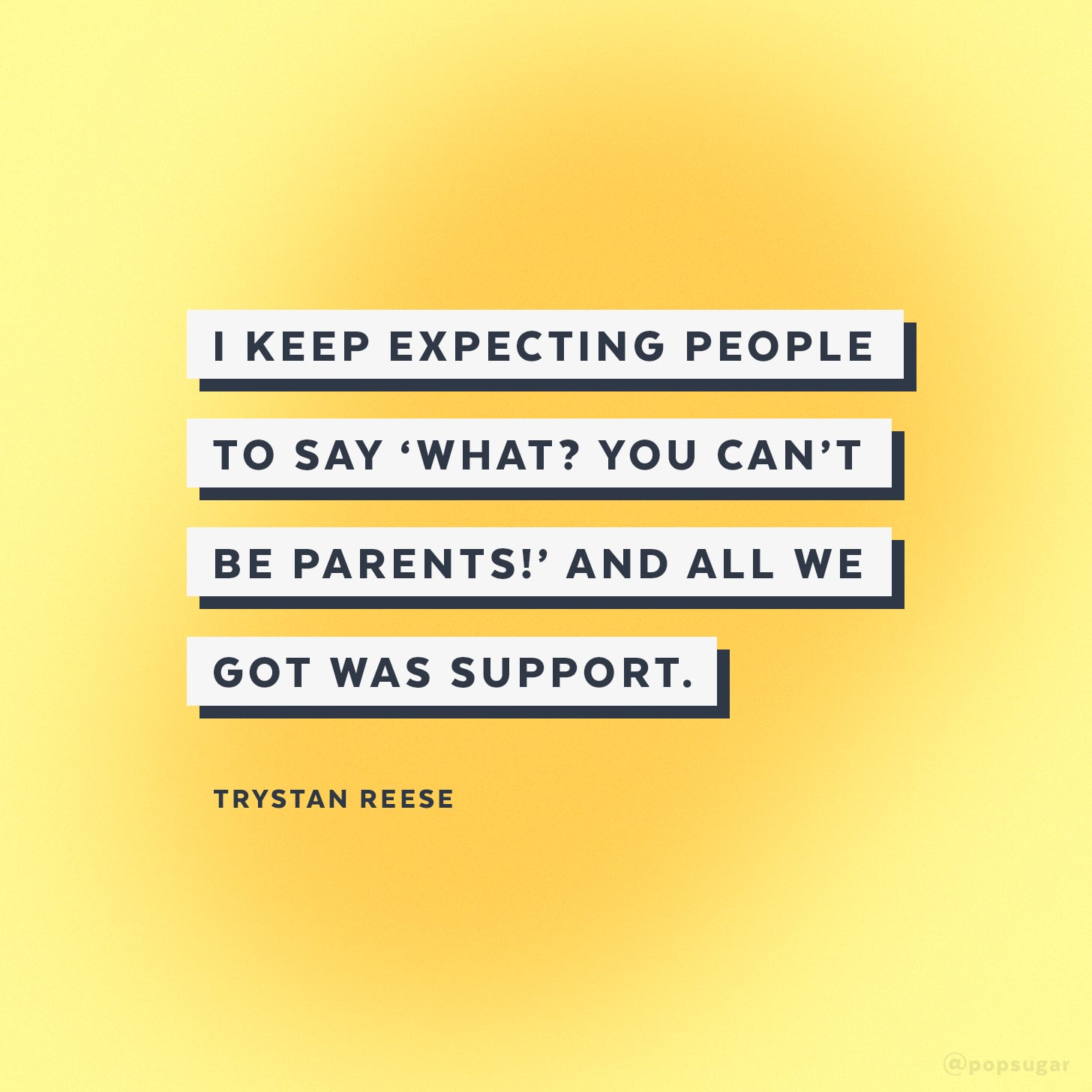 Their story rippled across the internet by way of the popular parenting podcast The Longest Shortest Time.

Their unlikely path in parenthood was just beginning, however. The duo decided to share their lives as queer parents online via their website, Biff and I, and their Instagram. In 2017, they opened a new chapter in their story when Reese became pregnant and gave birth to their son Leo, now 10 months old. The experience sparked a lot of questions from the general public, but Reese and Chaplow point out that their journey isn't unheard of.

"It's not a special story," Reese laughs, recalling how many transgender fathers he knows. "But we forgot, truly, how divided this country is and how many spheres of reality there are. For most people in this world, they don't live in the sphere of reality where transgender men have babies. That was a surprise that people were so blown away — so positively and so negatively."

Throughout these experiences, both Chaplow and Reese have realized that being queer parents isn't an easy matter since so many systems in society intend to break their autonomy. For them, this was particularly pronounced in the court system as they fought to secure both emergency and permanent guardianship of their two eldest children, a process that required several court visits in a venue where many queer parents are denied adoptive rights.

"Every time you have to go in front of a judge — which many LGBTQ+ folks have to do in order to secure their families — it's like you're rolling the dice."

"The systems are not built for us," Reese explains, citing their adoption experience and his own work as the director of family formation at the Family Equality Council. "Any time we bump up against the system, there is friction. Every time you have to go in front of a judge — which many LGBTQ+ folks have to do in order to secure their families — it's like you're rolling the dice."

Reese says that uncertainty was also reflected in his pregnancy. "Am I going to get a doctor who is up on the latest research around trans pregnancies, who will understand what we're doing is safe and medically advisable, or am I going to get someone who is going to bring their outdated bias? Any time you bump against an individual of bias or systems that are developed for straight people, there's gonna be tension." 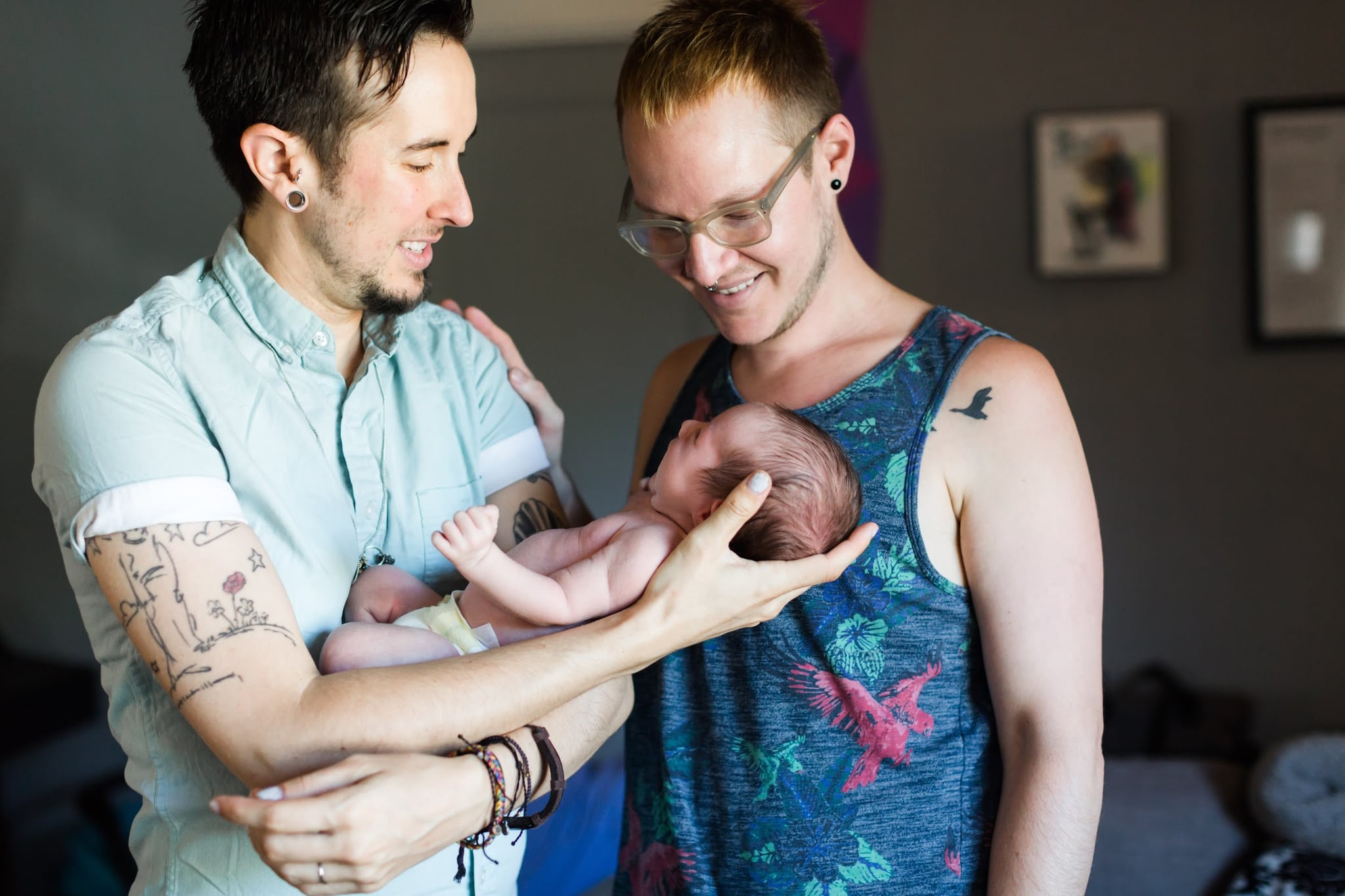 The reality is that approximately 6 million kids and adults in America have LGBTQ+ parents, and as Chaplow and Reese can affirm, the queer parenting experience is, well, normal. They do chores as a family, garden as a family, go to Little League practice — Chaplow had to take a break from our interview to do just that — and watch television together, though they favor RuPaul's Drag Race. If there's any way they see themselves as special, it's that their focus is on raising their children to be free, respectful thinkers. They hope they model an openness and fluidity by sharing roles as parents and breadwinners while educating their children on subjects like gender-neutral pronouns, feminism, racism, and more.

"They're seeing a level of egalitarianism that doesn't usually exist in straight households."

"I hope that we're modeling liberation," Reese says. "They're seeing a level of egalitarianism that doesn't usually exist in straight households."

Still, there has been a curiosity about what their family experience has been to be examples of how queer parental excellence plays out. Yet they didn't come to sharing their story on Instagram or blogging easily. "We wavered back and forth for some time," Chaplow says. "There have been times where Trystan has been like, 'This is a bad idea. We shouldn't do this anymore,' and there are times when I'm feeling this way."

"Truthfully, some of it was unintentional," Chaplow continues, pointing to the podcast as prompting them to become more public. A lot of this experience has to do with queer respectability politics, of society approving of certain styles of living as minorities, and the need to use that privilege. "The hard truth is that Trystan and I are palatable queers," Chaplow says, referencing the fact that they're both white, middle-class males. "We're not too challenging on face value. It's easier for straight people to look at us and hear our stories. . . . If we have that, we should help push the bounds of what people think of family and gender." 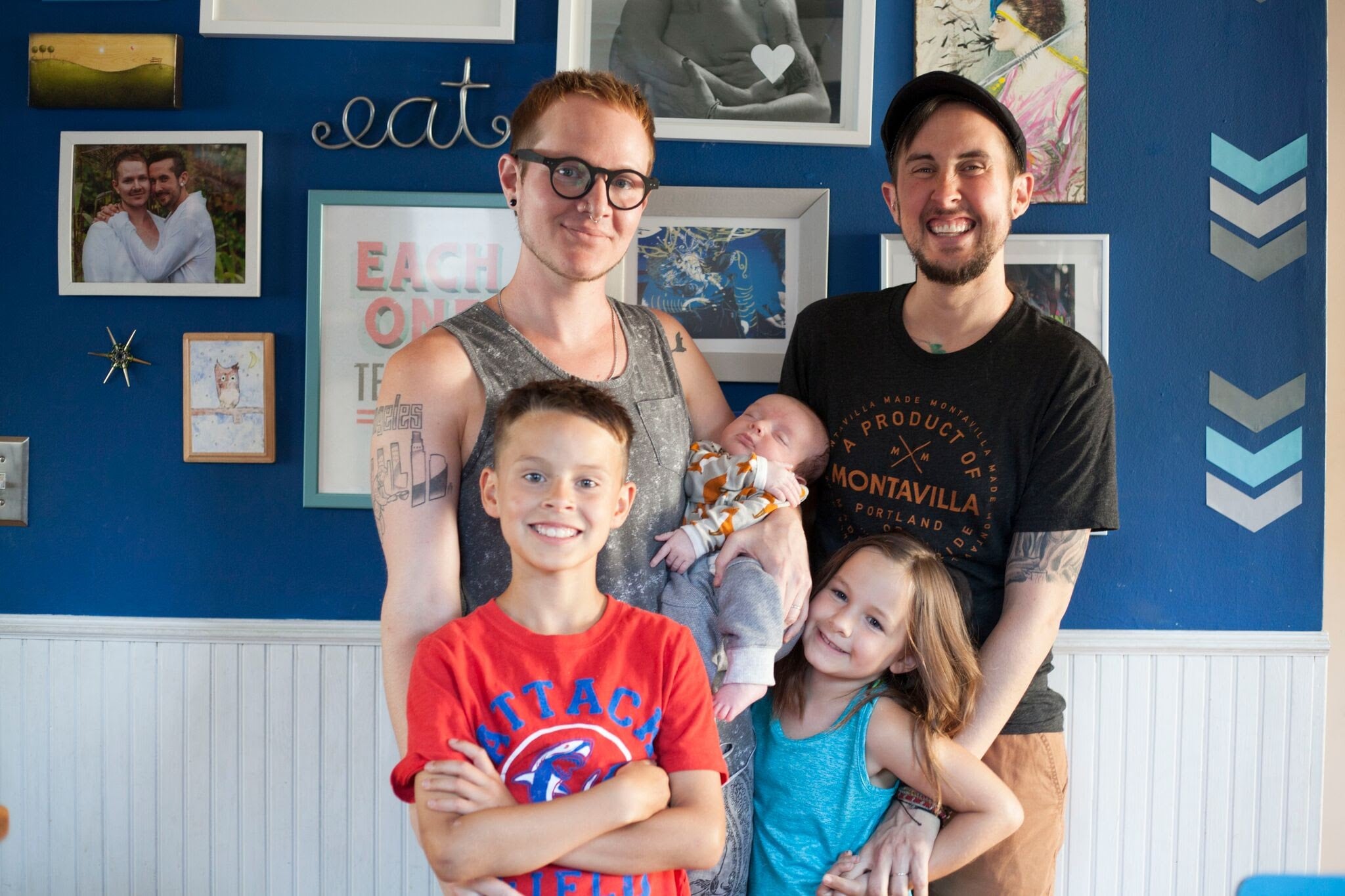 "We saw this as an opportunity to push past the old narratives," Reese adds. "It kind of feels like the acceptance of me as a man is predicated upon me never reminding anyone that I am not cisgender. For a lot of [trans men], they're like any other man, and they don't want to be seen differently. Period. But, for some of us, we are able to or excited about embracing the things that make us unique and different. We think those things make us powerful, and we want to celebrate them."

For people like Chaplow and Reese, to be parents is to redefine parenting — particularly in a society where many queer persons are still told coming out closes the door to that experience. The partners hope people keep pushing forward, to love themselves and each other more — and to spread that love outside of the home. That, they believe, is how you build a successful family. 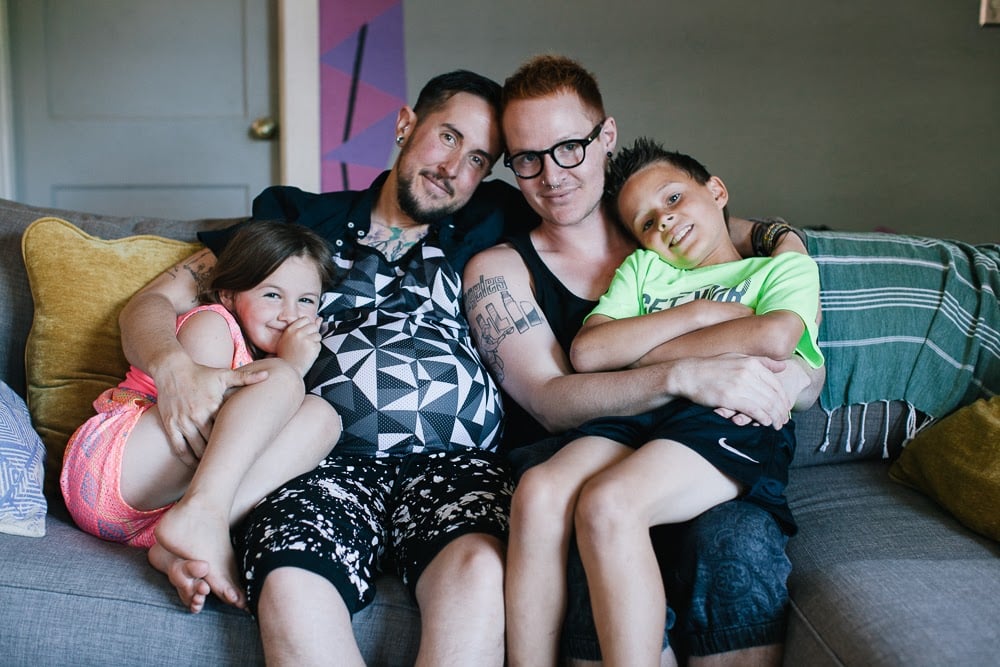 "Staying connected to your partner and staying in love with your partner is really important," Reese says. "I prioritize my relationship with him literally over everything else. . . . I make sure Biff knows how incredibly valued he is to me. He needs to know that all the time."

Ricky Gervais
Ricky Gervais Wants to Offend People — as a Trans Man, I Won't Take the Bait
by Beau Brink 3 days ago

Celebrity Instagrams
Becca Tilley Gushes Over Hayley Kiyoko: "[She] Has Really Made Me Feel Brave"
by Eden Arielle Gordon 3 days ago

Dove Cameron
Dove Cameron Opens Up About Her Dysphoria: "I've Been Struggling Lately With the Concept of Self"
by Taylor Andrews 1 week ago