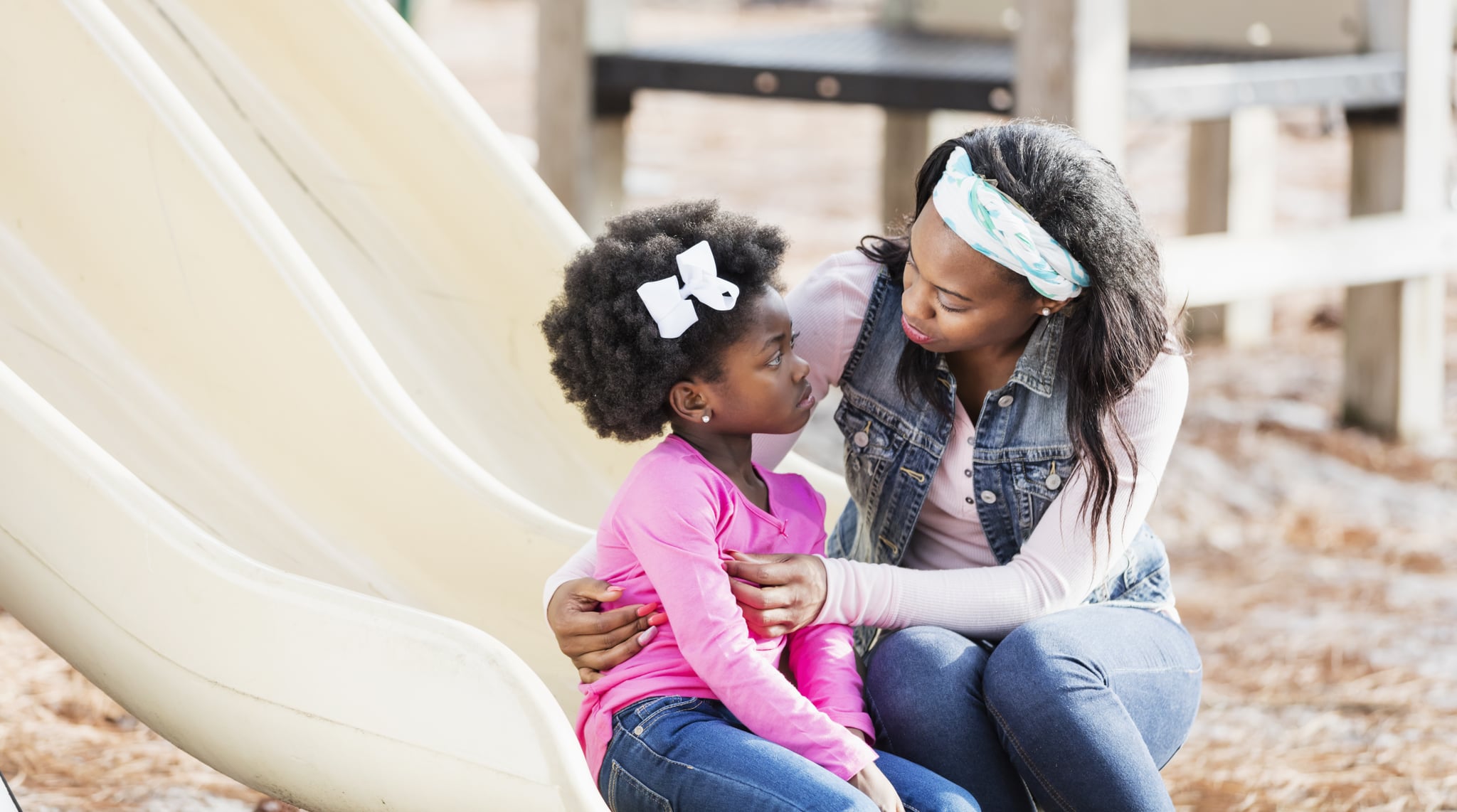 A few years ago, my kid and I experienced a new kind of stranger danger I had no idea existed: the parent who disciplines your child, except you've never seen them before in your life! We were at a playground where I'd take my little ones often. My oldest daughter wasn't quite 5 years old at time. She and her younger sister, who was 2, were going down the slide a million times in a row with a few other kids. I sat nearby feeding my newborn and chatting with a mom friend. I would say my level of supervision was somewhere between "totally engaged in what my kids are doing" and "I'm looking over periodically but I am more intent on talking to an adult for the first time in weeks." Suddenly, my oldest came running over to me with a look of sheer panic on her face that I had never seen before. "I want to go home. Now," she said.

I implored of her to tell me what had happened. But she just kept repeating, "I want to go." She was pulling at my shirt, willing me to move my body toward the parking lot. Eventually, I got the story out of her. Another mom yelled at her for allegedly kicking her child on the slide. I kneeled down so I was face-to-face with my daughter and asked, "Well, did you?" But I already knew the answer. If the mom had accused my toddler of kicking, I'm sorry to say, I might believe her. To this day, she can sometimes be a bit of an aggressor. But my oldest? She's a rule follower if there ever was one. I mean, she'll come home from school and confess, "I had a cookie at lunch, so I can't have a treat tonight."

Related:
These Are the Rules My Husband and I Follow When Disciplining Our Son

That day at the playground, I tried to help her calm down enough to tell me what happened. "I don't know. The lady just started yelling at me that I kicked her kid. But I didn't!" I felt my mama bear instinct take over and, newborn in hand, I marched over to the mom to find out what the heck was going on. It turned out her kid had told her that my daughter kicked him, but she hadn't actually seen it happen. I managed to keep my voice even and insisted my daughter would not kick another child. But this mom was pretty upset and continued to claim her son was innocently minding his own business when my daughter decided to behave badly.

At that point, my daughter was shaking and crying as this mom went on and on. I decided to leave the park so she'd feel safe, and thankfully, my little girl calmed down once we were in the car. But it took me a while to fully compose myself. Having a total stranger unleash on my daughter was very unnerving.

Given the space of some time, however, I was able to put the incident in some context. And in a weird way, I kind of understand where that other mom was coming from. As much as I had tried to protect my child, she was just doing the same. While I don't agree with her method, I do understand that she also wanted to keep her child safe. Because when it comes to our kids, it can be hard to control our emotions, and we tend to be blind to anything or anyone else.

Part of it is that it's hard to see your own child in a bad light. Case in point, I still don't think my daughter kicked her kid. Even if she had, of course I would have made her apologize, but I still would have defended her. In the end, I'm not a huge fan of the woman who yelled at my child, but I get her. What I learned that day is that hell hath no fury like a parent whose child was scorned. And that is OK, and almost kind of beautiful, because it demonstrates how much we love our kids. I hope my daughter also learned something: Her mama will always have her back. Whether she is right or wrong. If she's wrong, we're going to work on making it right and doing better next time. But no matter what, I'm her ride or die mama bear.

Incidentally, years later, my daughter swears she never kicked that kid. (I knew it.)

APIA
If You Grew Up as the Eldest Daughter in an Asian Household, I Feel You
by Caitlin Taylor So 1 hour ago

by Haley Lyndes 43 minutes ago