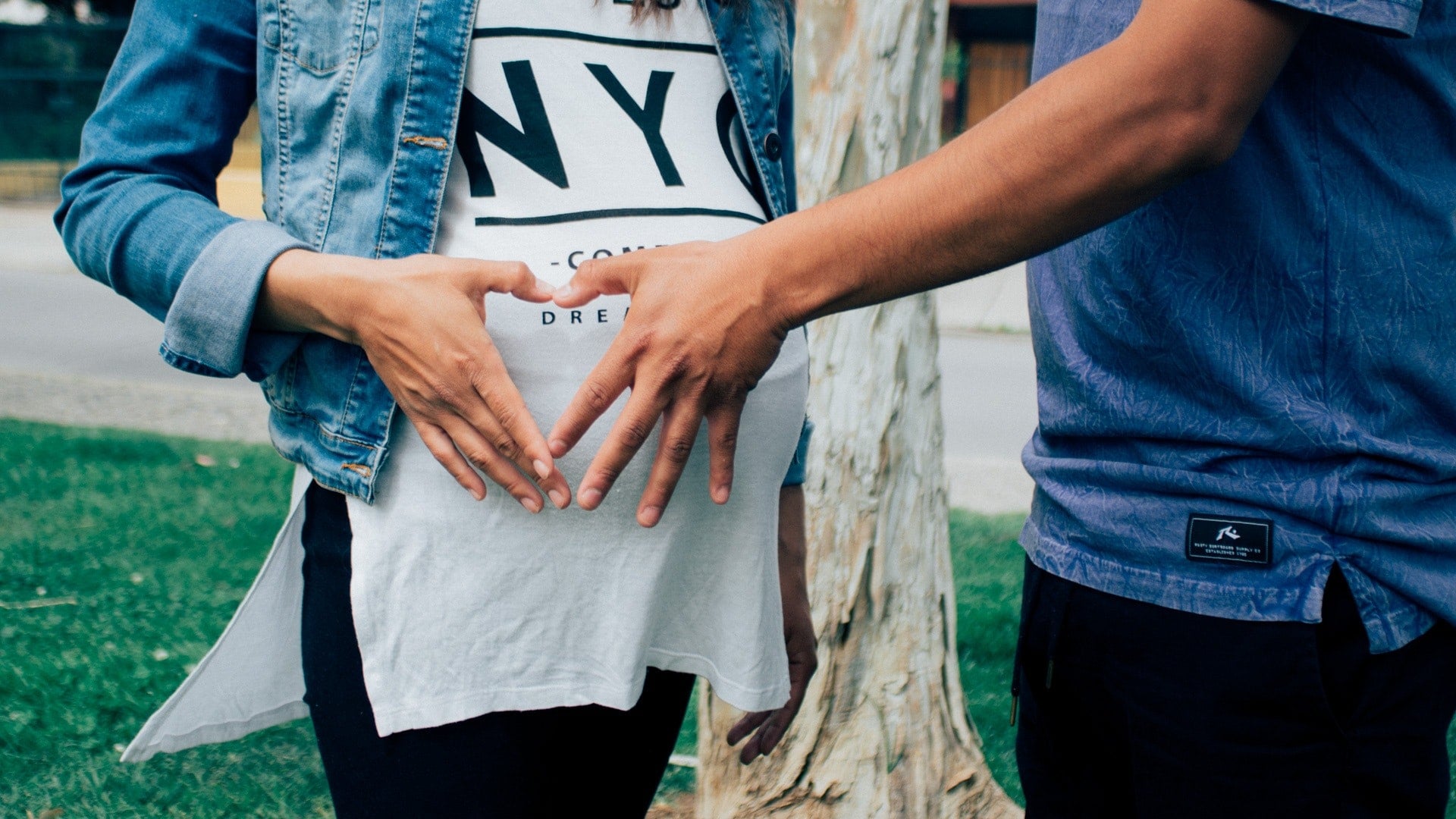 It was a wet Monday morning in March 2004. I was 29 years old and had been in my dream job at a popular magazine for three months. I was on my way to my first appraisal but had stopped off at Starbucks to use the bathroom. My period was late, but I wasn't worried. I did a pregnancy test the week before and it was negative, but thought I should take the second test, which came in the handy pack of two, just to be sure.

I peed on the stick, waited the minutes it says to wait, and felt perfectly calm, because I couldn't be pregnant, right? But just as I hit my foot on the bin pedal to throw the test away because the result looked pretty much the same, I did a double take. A faint cross started to appear. I had to hold it up to the light to see it properly, but it was definitely there, becoming stronger and stronger, just like the beats of my heart.

I took out my phone and, with a violently shaking hand, I called Egg. "I think I'm pregnant," I said. "What?" he replied. "But I thought you did a test." "I did another, and it's positive. There's a cross. It's faint, but it's definitely there."

Silence was on the other end of the phone before Egg agreed to meet me for lunch to see the cross for himself. Any woman will tell you that the moment you find out you're pregnant, even if it's planned, is always a shock, but for me, the shock was bigger. You see, Egg was not my husband or my boyfriend. He was — and remains to this day — my friend, one of my very best, but still just my friend.

Egg (my nickname for him) and I met in London when I was a 26-year-old journalist and he was a 33-year-old photographer assigned to shoot the story that I was writing. We hit it off immediately and quickly became buddies. He was original, creative, and fun, and we got on like a house on fire. But I didn't fancy him and certainly never saw him as a potential boyfriend. He made it clear that the feeling was mutual.

One night, however — as friends of the opposite sex sometimes have a tendency to do at some point — we ended up in bed together. This on-and-off (but mainly off) sexual relationship carried on for three years until I fell pregnant, when it became clear this was not what we were about. We did briefly try being in a relationship, but it just never felt right.

I'm so proud, not to mention totally surprised, at how we've made our unconventional situation work.

But now I was pregnant with his child. While Egg, who comes from a long line of bohemians and is seven years older than me, was calm and even delighted about the situation, my world had been turned upside down. I never doubted I wanted to keep our baby, but as my 30th birthday came around (I was 10 weeks pregnant, too early to tell anyone, so I had to pretend the tonic water in my hand had vodka in it), I had some serious recalibrating to do. I'd always assumed my life would follow the conventional pattern: meet the love of my life, get married, have kids. But now I was facing life as a single mom, and the worries multiplied, along with the cells in my womb: Would anyone want me now with a child in tow? Would I cope? Would our child be happy? A big concern was about mine and Egg's relationship. So many articles told me that the first year of being parents is the toughest for couples. Many wouldn't survive it, and they, presumably, were a romantic item. Would mine and Egg's friendship — without the glue of sex — make it through? I couldn't bear to think it wouldn't, since I valued it so highly, but my greatest fear was that we'd become warring exes, dropping our kid off on the other's doorstep, but without the married bit first. Oh, how I underestimated us.

Related:
The Many Reasons Single Moms Are Happier Than Married Moms, Says Science

As my pregnancy progressed, I won't pretend things weren't emotionally difficult. I struggled with this notion that having a baby, especially your first, was supposed to be one of the most joyous times for a couple, and because we weren't one, I was a fraud of a pregnant person. Suddenly, pregnant couples were everywhere — in the frozen food section, in the elevator at work, and stroking one another's faces in the Pregnancy and Baby section of bookshops where Egg and I wandered in after my first scan, which he attended, during which he was referred to as my "husband" throughout.

The manuals suggested my partner might rub almond oil on a particularly intimate part of my body to prepare it for birth. This felt rather a tall order from your friend, albeit the very excited father-to-be of your child. As the birth drew nearer, however, I experienced something wonderful and entirely unexpected: Egg and I grew closer. Our friendship deepened, and I grew excited about taking it to the ultimate level: sharing a child. We agreed to coparent. That is, we'd live apart, but share care of her or him, literally dividing our time 50/50, something that we still do to this day, and our son is now 14. When he was born, perfect in every way in December 2004, Egg was at my side and could not have been more supportive.

So many people were convinced that Egg and I would eventually get together (people still ask all the time), and I'd be lying if I claimed I'd not hoped for that myself at times. However, I'm so proud, not to mention totally surprised, at how we've made our unconventional situation work. I'm proud of the state of our friendship (it's never been better) and of our gorgeous, loving son who has obviously given us the same joy that any child, no matter how they come into the world, would.

I always describe the way we've brought him up to be "together-apart." When he was 4, we moved together-apart out of London to a smaller town where the schools were better and there was countryside around. We've been on countless holidays together and always spend Christmas together, too. I never imagined my life would turn out this way — to live as a single mom with my son and be just good friends with his dad — but I see so many positives in our situation. Our son never has to worry about us divorcing, since we were never together in the first place. And, without the "we really should have sex" thing hanging over our heads like it seems to for so many of my married friends, I feel totally liberated to just enjoy the friendship we have. Many people say we get on better than they do with their spouse.

There was a time when, due to financial circumstances, I had to move in with Egg for a while. Everyone said when I moved out that my son must be devastated, but on the contrary, he couldn't wait for us to live in separate houses again. Why? "I get more attention and you don't bicker all the time about parenting!" he said. When my friends talk about the point-scoring that goes on in their homes ("I bathed him, so you can read him a bedtime story"), I feel so (smugly!) pleased that I don't have any of that. It's not all smooth sailing, of course. No parenting is. But sometimes I feel so lucky that my son has all the benefits of the other parent's love and support without the risk that, one day, it'll all go sour.

Katy Regan was brought up in a seaside town in northern England. She studied at the University of Leeds before moving to London, where she worked as a journalist and as a commissioning editor at Marie Claire magazine. Katy has written four books published in the UK, and Little Big Love, her US debut released by Berkley in June 2018.

Pregnancy
Yes, Unfortunately, It Can Be Normal to Experience Third Trimester Morning Sickness
by Melissa Willets 3 hours ago

Winter Fashion
Let Me Introduce You to the Homecoat, aka the Coziest WFH Robe in Existence
by Natasha Marsh 8 hours ago

by Yerin Kim 16 minutes ago