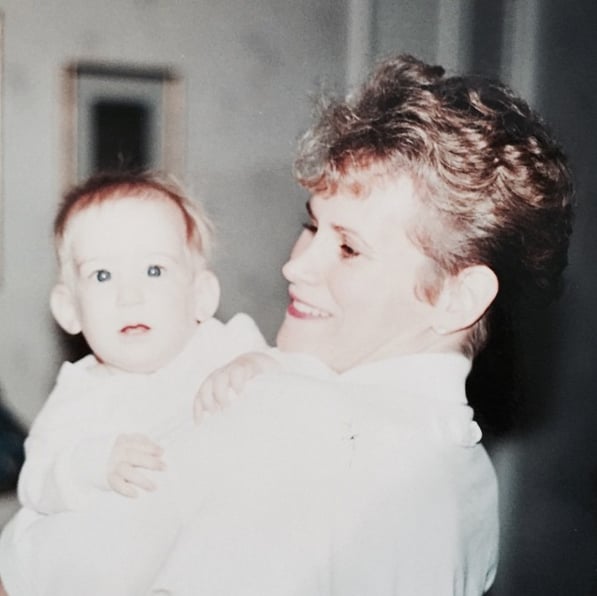 When a neighbor walked into my childhood home a few years back, he made a comment that stuck with me.

"My gosh, Lauren, from looking around at all of the framed photos, if I didn't live next to you throughout your entire life and just walked in, I would've never known that you existed."

It's true: being the youngest of four kids means that I got slighted in the picture department. It wasn't that I was an afterthought — you just don't have time for thoughts when you have four little ones under the age of 10 running around without a nanny or babysitter to lend a hand.

As I got older, it still stung to see all of the different albums dedicated to my older siblings, especially when my album — in which a page and a half was devoted to me before it became crammed with report cards and photos of the others — paled in comparison.

Once, during a heated childhood fight, one of my siblings tried to make me feel even worse about being the youngest by spewing a secret . . . that I was an accident and therefore unwanted. However, it ended up having the opposite effect. The instant I learned I was unplanned was actually the most empowering, hopeful moment of my life.

For as long as I can remember, I had known my mom wasn't able to get pregnant easily. After more than six years of struggling with infertility, she was lucky to have one healthy child, let alone four. I heard about the miscarriages she had both before and after her firstborn, and I was familiar with the surgeries, fertility treatments, and drugs that it took in order for her to have my siblings. I also knew that my aunt endured a similar struggle and that my three cousins are adopted.

I knew all of this and I worried about my own fertility — before I had even gotten my first period.

Like my mom, my desire to be a mother is something I've felt for as long as I can remember and never questioned. It's not something that I ever debated. While some consider motherhood a choice, I consider it an esteemed aspiration.

So when I discovered the years it took for my parents to have kids, I wondered if the same hardship would be in my future. I always knew that adoption could be an option. Yet, I let myself worry about the struggles of heading down that path before I even wondered what I wanted to be when I grew up.

When my sister shot out the news that I was an accident, the thought had never even crossed my mind. Her intent was most likely revenge for playing with her American Girl doll without permission. But to both of our surprise, the revelation didn't leave me once again loathing my youngest-sibling status. In fact, for the first time, it didn't faze me at all.

I looked over at my mom — not startled but for confirmation — and after she nodded, I quickly responded, "Not a mistake but the best surprise they ever had!"

On a long car ride home from college, I finally asked my mom about the circumstances surrounding my unexpected arrival, and she frankly explained, "We had no way of knowing we could get pregnant on our own — after 15 years of marriage we hadn't, so why in the world would we use protection?!" And while I didn't appreciate the TMI moment while I was operating a moving vehicle, I did value her honesty. She opened up that she always dreamed of having five little girls, and when she decided to take that unexpected pregnancy test, she was thrilled but also beyond nervous.

She confessed that my dad had pictured a smaller family than my mom's dream brood and wanted three kids — exactly what they already had. She felt that I would be the perfect compromise between five, but she also knew that this "happy accident" wouldn't be one that he'd be willing to risk again. Being a retired nurse, my mother understood that getting pregnant at 38 years old came with major risks, and her heart plummeted to her swollen gut when they couldn't hear my own tiny heartbeat during the first sonogram.

The only person more excited than my mom on the day of my scheduled C-section was my father — and maybe that same sister who broke the news years later but at the time was beyond thrilled to finally be getting a baby sister to dress up.

Yes, I was a complete accident. I joined the family unit later in life, when money was tighter and experiences were already had. My baby photos never made it to the wall in my parent's bedroom because the gold frames that encased each of my sibling's newborn faces weren't still sold by the time I came around.

But none of that mattered compared to the powerful knowledge that I had a chance to become a mother. I might have the opportunity to get pregnant — and take as many photos as I could ever want of my own children.

The news of my parents' surprising turn of luck — which could've left other children feeling insecure and unwanted — has always left me filled with hope.

Pregnancy
IVF vs. IUI: How They're Different, and How to Know What's Best For You
by Korin Miller 4 days ago